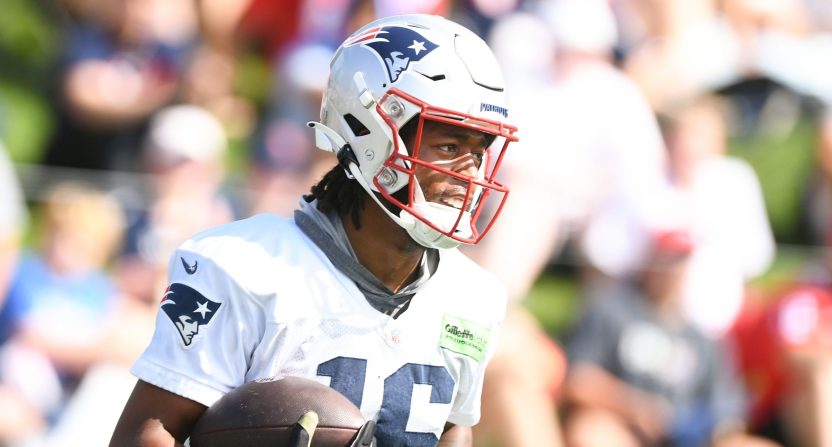 The New England Patriots are set to take on the Pittsburgh Steelers Sunday as they look to bounce back from a Week 1 loss last week. But it appears that one player seems to question the team’s identity heading into the game.

“Confidence isn’t an issue, but I question what the plan is sometimes and how we’re going to attack.”

Crisis of confidence? The #Patriots are doing their level best but…my report. pic.twitter.com/QOIj5V04Zj

When a player questions their team identity heading into a game, it is clear that there is something wrong. And that appears to be the case in New England at the moment.

That is … quite the quote from Myers. I mean … wow. https://t.co/NLLwHjdvsg

#Patriots WR Jakobi Meyers told @MikeGiardi: "I question what the plan is sometimes and how we're going to attack."

Boy do Mac Jones, Matt Patricia and the #Patriots offense need a win to continue to trust the process and not question it. https://t.co/pV6ptm1M16

An ongoing storyline throughout the offseason surrounding the Patriots was about who was going to be the play caller for New England’s offense.

It ultimately ended up being longtime Patriots coach Matt Patricia, who returned to the organization after a failed stint with the Detroit Lions as their head coach.

The loss of former offensive coordinator Josh McDaniels appears to be a huge problem for New England at the moment. That may make for a season filled with struggles on offense for the Patriots this season.

It is only Week 2 and a number of teams are figuring out their game plans, much like New England. But this quote certainly is not inspiring for Patriots’ fans that were hoping for a return to the playoffs this season.