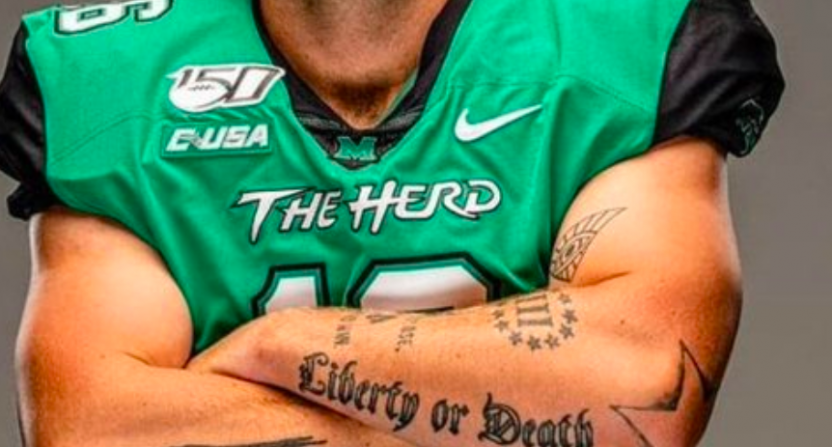 It usually raises eyebrows when an NFL team uses a draft pick on a kicker, but when the New England Patriots drafted Marshall’s Justin Rohrwasser in the fifth round, it raised eyebrows for a lot of the wrong reasons.

Rohrwasser came into the draft as a bit of an unknown, to the point where ESPN didn’t have highlights at the ready for him and NFL.com hadn’t even graded him. That might explain why the sight of his tattoos was such a surprise to many. Among them was an image of three I’s surrounded by stars, which is well-known as the symbol for The Three Percenters, a right-wing militia group that advocates against immigrants, refugees, and minorities. They’ve also been denounced by the Southern Poverty Law Center and Anti-Defamation League as an extremist group.

DISCOURSE! I DEMAND IT! pic.twitter.com/x2ONruBNWO

When asked about the tattoo, Rohrwasser pled ignorance, implying he didn’t know what it actually meant when he got it.

‘I got that tattoo when I was a teenager and I have a lot of family in the military and I thought it stood for a military support symbol at the time,’ he explained. ‘Obviously, it evolved into something that I do not want to represent.’

‘When I look back at it, I should have done way more research before I put any mark or symbol on my body.

‘It is not something I ever want to represent, so it will be covered,’ he assured.

On paper that seems plausible enough and most reporters seem to have just given Rohrwasser the benefit of the doubt. However, because we have this thing called the internet, it was pretty easy to uncover that Rohrwasser’s story of childish ignorance was almost certainly bullshit.

While Rohrwasser’s comments try to disassociate him from the ideals of groups like the Three Percenters, much of his social media activity seems to imply the opposite.

In this post from 2016, Justin is displaying his three percenter tattoo along with a “live or die” black polo. pic.twitter.com/tWG6vRYMNL

The strange thing about the way Rohrwasser explained his tattoos was that no one seemed to follow up with him about his answers. And when you read a lot of the articles about it, they seem to just accept his answer pleading ignorance instead of questions how you accidentally end up inking a right-wing militia group logo on your body.

So Bill Belichick got asked three questions on his dog but none on the kicker tattoo story? That's interesting.

As Bomani Jones points out, there is, unfortunately, probably a reason for this.

were there followup questions or was this really enough?

important followup question: what does "covered" mean? covered by new tattoos? just covered by an armband on the field but out the rest of the time? https://t.co/tdhgq8s4Mm

look, i just want you to notice how low the standard is on this. the dude may have perfectly good explanations for all of this, but look how afraid people are to ask for them.

Rohrwasser seems to be banking on the notion that a lot of people are tired of “social media gotcha” reporting and by saying it was something he did as a dumb teenager, a youthful indiscretion if you will, he’ll get a pass that doesn’t require further follow-up. So far, unfortunately, it seems like a lot of people are more than happy to give it to him.