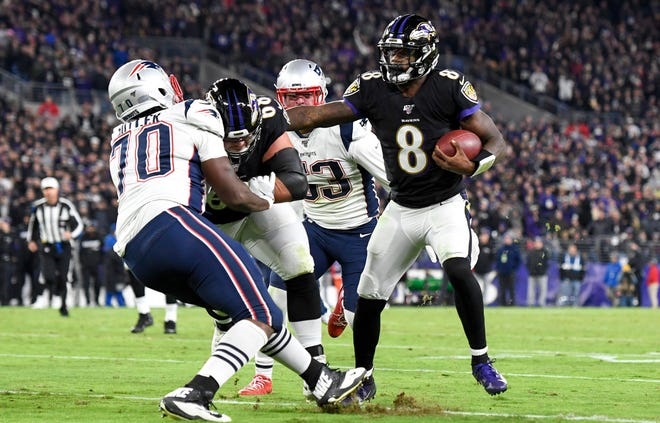 Lamar Jackson has a Heisman Trophy. He’s the NFL MVP favorite. And he has his own hype man. His overall excellence for the Baltimore Ravens (8-2) has been THE story of this season. However, as brilliant as he’s been, a formidable obstacle remains.

But as we’ve learned time and time again, beating the Patriots in the regular season is one thing. Beating them in the playoffs is virtually Mission: Impossible. Especially at Gillette Stadium.

In the race for home field advantage in the AFC, New England (9-1) holds a one-game lead over the Ravens. It stands to reason that one of these two teams will claim the AFC’s No.1 seed. Both teams are in the midst of tough stretches.

New England has the easier path with four home games. Baltimore owns the tiebreaker. The battle for the top overall seed might not be decided until the final week of the regular season. But even if the Patriots stumble, they have proven they can win an AFC championship game on the road (Go ask the Chiefs).

It seems inevitable that Baltimore and New England will meet again. Kind of like last year with Kansas City and New England. (No one really took the L.A. Chargers seriously despite their 12-4 record).

This season, only Baltimore and Kansas City are realistically capable of defeating Tom Brady and Bill Belichick in the playoffs. And the Chiefs might not even get a shot because of their horrific defense. Baltimore is a much surer bet. The Ravens are solid in every phase and have Jackson, a quarterback with a very particular set of skills. Skills he has acquired over a lifetime. Skills that make him a nightmare for the rest of the NFL.

Jackson (788 yards) is a key cog in the most relentless rushing attack we’ve seen in four decades. The Ravens have gained 2,038 yards on the ground. That’s the most through 10 games since the 1977 Chicago Bears had 2,152. Credit John Harbaugh and offensive coordinator Greg Roman for not trying to squeeze a square peg into a round hole. They designed an offense to fit Jackson. With designed runs and another rushing threat in Mark Ingram (667 yards) coupled with Jackson’s improvement as a passer, Baltimore is extremely difficult to slow down.

Jackson (19 touchdown passes, five interceptions) is fourth in passer rating (106.3). His team leads the NFL in scoring (34.1), rushing yards per game (203.8), and is second in total yards per game (428.6). According to Football Outsiders, the Ravens have the third most efficient offense in the league.

Former star quarterback Michael Vick, a dual threat in his day, is impressed by Jackson.

“He’s done everything right, he’s made all the right decisions, play inside the pocket, outside the pocket,” Vick said on FOX Sports. “Just shocking to me as far as what he’s been able to do, and it’s just a great thing to see.”

Belichick is the brightest defensive mind the game has ever seen. He knew what was coming and still couldn’t slow the Ravens who rolled up 372 total yards. The Patriots have only surrendered a league-low 108 points. Baltimore is responsible for 34.2 percent of that total.

The Ravens have confidence. Plus, a coach in Harbaugh who has beaten the Patriots in New England before (33-14 in the 2009 AFC Wild Card game). But that was a completely different squad from this one. And again, beating the Patriots in the playoffs is a Herculean task.

Last season, Kansas City had everything you could want vs. New England: an MVP quarterback in Patrick Mahomes and homefield advantage. The Chiefs still lost. Baltimore might wind up the same advantages and suffer the same fate. Yes, New England’s offense has been pedestrian. But we’re so conditioned to expect the best from the Patriots because they keep winning despite a quarterback who is defying aging.

Don’t forget. The Patriots lost five games last year – all to teams that didn’t even make the playoffs. They rallied to beat the Chargers (12-4), the Chiefs (12-4), and the Rams (13-3). Brady and Belichick have six Super Bowl titles.

Baltimore hasn’t won anything of significance with Jackson yet. He’s a highlight film and a curiosity. He’s a quarterback who is challenging us to think differently about how we see the position. And about how the position will be evaluated in the future. But to truly change minds, Jackson is going to have to get to a Super Bowl. That means going through the Patriots.