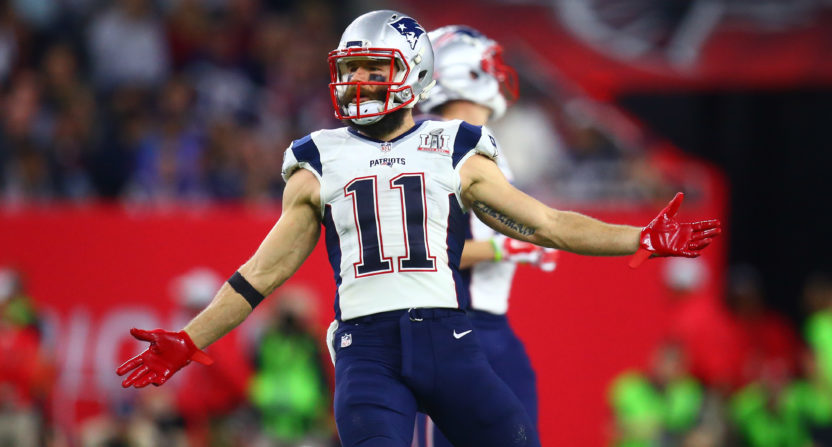 The latest disciplinary fight between the NFL and the New England Patriots may revolve around Julian Edelman. ESPN’s Field Yates and Adam Schefter reported Thursday that Edelman is facing a four-game suspension for violating the league policy on performance-enhancing substances, but is appealing:

The suspension is currently under appeal as Edelman has taken “hundreds of tests” and has not tested positive before, a source told ESPN.

Here’s video of Schefter discussing this story on NFL Live:

“Obviously, he will try to fight this, he will try to have this reduced, the appeal is under way as we speak, but again, we talked about being there for OTAs, there are other wide receivers who could be featured even more prominently. Plus, we also have a situation where we’ve seen this team start without Tom Brady for four games. It’s missed Gronk at various points for four games. And now we’ve got a player who’s coming off a torn ACL, who turned 32 last month, now obviously facing a four-game suspension.”

Edelman’s recovery from that torn ACL (which caused him to miss all of last season) had reportedly been going well, and he’d even been catching passes from Brady outside of OTAs, but if this suspension is upheld, that certainly could be a blow for both him and the team. The Patriots made it to the Super Bowl without Edelman last year, but he has regularly been a key receiver for them since the club drafted him in the seventh round way back in 2009, posting 1,000-yard seasons in 2013 and 2017. And it’s also interesting to consider this in the context of larger NFL fights with the Patriots (including Brady’s Deflategate suspension in 2016), and the general anti-NFL office sentiment many Patriots’ fans have developed. If Edelman is actually suspended here, that may not go over well at all in Boston.

1 thought on “Patriots’ receiver Julian Edelman is reportedly facing a four-game suspension for PEDs, is appealing”