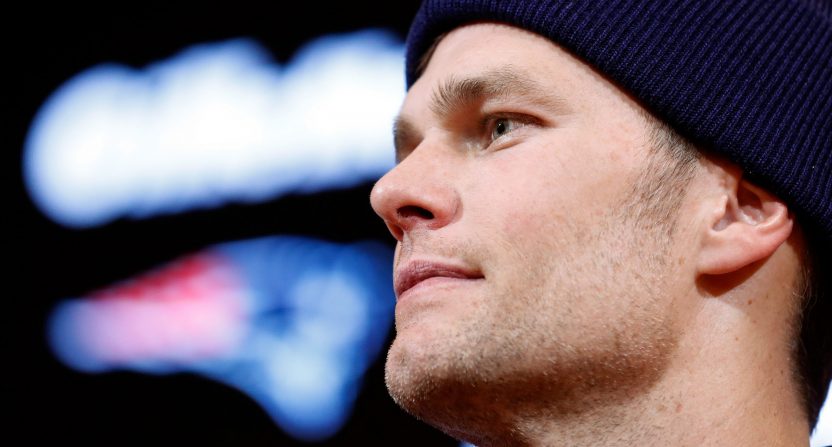 Will Tom Brady be the quarterback of the New England Patriots in 2020? It still feels like the safest bet in spite of recent events and rumors. But that’s not going to stop the questions from swirling until it happens.

Perhaps the most obvious signal that Brady will eventually return to Foxborough to finish out his Hall of Fame career is the staggering contract offer the Patriots appear willing to make to keep him. NFL Network’s Ian Rapoport reported Sunday that New England was willing to go $30M+ for each year that Brady wanted to keep playing.

The Patriots are intent on keeping Brady, obviously, believing he has one or two good years left. They are willing, sources say, to pay him in excess of $30 million per year to keep him in New England — a significant commitment that would bring his salary more in line with other elite QBs.

Of course, there are other factors. Brady will likely want to see the franchise commit to bringing in better weapons for him to throw to as he attempts to win at least one more Super Bowl. Given that his entire legacy is tied up in New England, it’s in his best interest to see if this can happen.

He still may go elsewhere, too. Plenty of aging superstar quarterbacks have done it, though very few of them have found success on the other side. For every Peyton Manning winning the Super Bowl with the Denver Broncos, there’s Joe Montana on the Chiefs, Brett Favre on the Vikings, and Donovan McNabb in Washington. The odds are stacked against Super Bowl success when starting over late in one’s career, even if the money looks good and the situation seems fresher.

The soon-to-be Las Vegas Raiders are hoping to convince Brady that things really are better over by them. Per ESPN’s Adam Schefter, Raiders coach Jon Gruden is smitten with the idea of getting Brady and the franchise will pursue him if he doesn’t re-sign with the Patriots before free agency begins. New England is expected to make a decision before the free-agent signing period begins on March 18.

When attempting to predict who would be a good fit for Brady’s services, The Comeback’s Brad Gagnon didn’t see the point in the Raiders wooing Brady.

While there’s a theory he could help generate hype for the Raiders in their new home, they’re still better off with Derek Carr. Moving on now would be too risky considering Brady’s age. Where would they be if he retired after one so-so season?

That still holds true as Brady’s arrival in silver and black would be a boon for a franchise attempting to make a big splash in their new home but it’s unlikely the team would be in a position to make a legitimate run for the Super Bowl in the next year or two (though things change quickly in the NFL, just ask the 49ers).

The smart money remains on Brady sticking around New England. And if he didn’t, the Los Angeles Chargers are perhaps best suited for Touchdown Tom’s services given their location and pieces in place. Either way, we’ll probably know where things stand in the next two weeks.