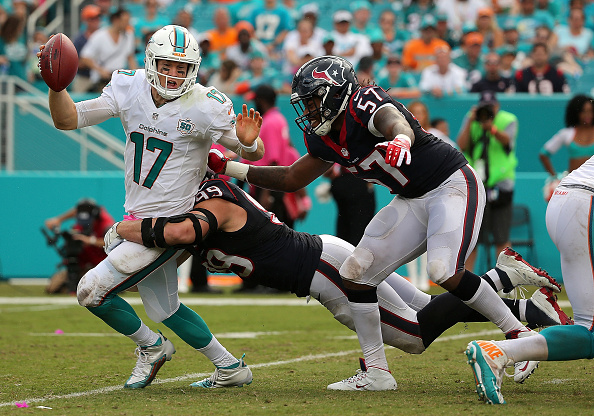 Put it this way: The only quarterback ever to complete every pass in a game while throwing at least 10 passes was Kurt Warner, who went 10-of-10 for 115 yards and a touchdown against the Houston Texans in 2005. But Warner didn’t even play half of that game before suffering a knee injury in the second quarter, and his Arizona Cardinals lost the game 30-19.

It’s rather amazing no other quarterback has ever completed 100 percent of his passes while at least making 10 attempts, especially because an incredible 35 quarterbacks have finished games with just one incomplete pass on 10-plus throws.

Last season, Ryan Tannehill of the Miami Dolphins was 18-of-19 in a game against Houston. In 2012, Alex Smith of the San Francisco 49ers did the same thing against Arizona.

Still, you can’t be statistically perfect with an incomplete pass. And sadly for Smith, this drop is all that kept him from being perfect in 2012.

Same with this borderline drop on Tannehill’s only incomplete pass against the Texans. He was 18-of-18 and this was his final pass of the game.

Craig Morton and Fran Tarkenton both once went 17-of-18, and in a 2009 matchup with the Jacksonville Jaguars Warner went 24-of-26. But nobody has ever started and finished a game without throwing an incomplete pass.

Ever. Seriously. Many have gone, like, 7-of-7 in relief or 6-of-6 before getting hurt. But a quarterback has never started a game and played the entire game and come out with a perfect completion percentage.

It only seems like a matter of time before this finally happens in the NFL.