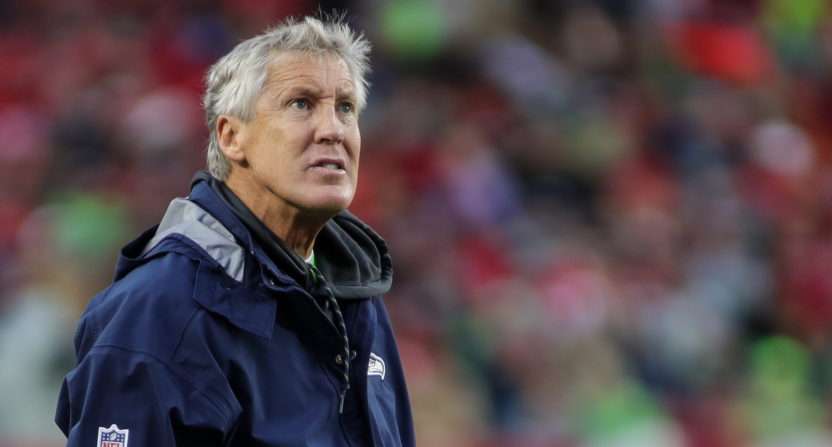 Pete Carroll is a great person. He seems personable and seems like someone I would go out and have a beer or Starbucks with. Pete Carroll is also a players’ coach, which certainly is the way to go. The era of the coach endlessly yelling and berating their players is outdated and easily causes players to tune out and stop listening at the white noise, rendering that coach ineffective.

But being a players’ coach has its drawbacks and you’re seeing this with Pete Carroll. Carroll is a pushover who is letting his players walk all over him. And because of that, the players are running the team and not the coach. And you saw it with Carroll’s latest decision to keep Russell Wilson in the game in a blowout loss to the Rams.

“You probably all were thinking that too and I thought [to myself] why is he still out there? I agree with you. But he wants to keep battling and I gave him one more series. It’s just who he is,” Carroll said.

Wilson, who played deep into the fourth quarter, said he never wants to be removed from a game.

“I always want to keep playing,” Wilson said. “That’s just the mentality. It’s the competitor in me. I always think if there’s time on the clock, who knows?”

Oh, give me a break. This endless optimism is dangerous and is a disservice to the team. Hey Pete, your team was losing 40-0 in the middle of the third quarter. Stop with the Lloyd Christmas optimism and sit your franchise quarterback so he doesn’t get injured in a blowout loss.

This could explain many other things the Seahawks have been in the news for. Teammates fighting in public when it should be held and settled in-house, players going after opponents’ knees when they are going to kneel the ball to end the game and Quinton Jefferson wanting to go into the stands to fight Jaguars fans after.

Throughout all this, Carroll looked like he didn’t know what to do. I was half expected him to drop a few “Oh golly, geez” in trying to explain what happened after that Jaguars game. Pete Carroll has no control of his team, he won one Super Bowl just to turn it around and lose one in the most inexplicable way that got Richard Sherman to go and yell at him for botching it so badly and then taking that to the media to throw him under the bus.

This team doesn’t respect Pete Carroll and he hasn’t really done anything to earn that respect. Being a players’ coach is the way to go in modern sports and it’s great to give players a voice and to provide an avenue for them to speak up and speak out if they feel things are incorrect. But that doesn’t mean Pete Carroll has to be a pushover either and sometimes players need a dressing down from their head coach.

Because going after someone’s knees on a kneel down play is never acceptable and teammates need to keep their dirty laundry and their disagreements with each other in-house. And when Pete Carroll cannot bring it to himself to overrule his franchise QB on a 40 point loss, what does this say if Wilson suffers a hard hit and looks like he needs to go into concussion protocol and just spends a half second in the injury tent because he needs to get back out there since it’s a close game. Oh wait, that happened a month ago.

Pete Carroll does a great job at listening to his players and it’s definitely great to get their input but at some point, Pete Carroll needs to take charge and be a head coach.