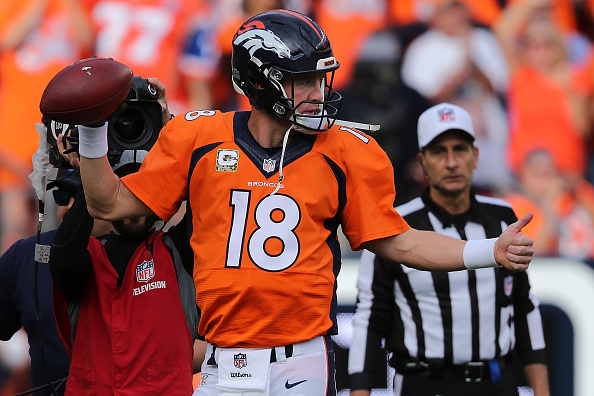 Saturday night, as the Redskins played the Eagles on NFL Network, news broke that Broncos quarterback Peyton Manning may have used human growth hormone in 2011 to recover from his neck injury. And somehow, faced with doping allegations against one of the best players in football history, fans seemed to yawn and go on mocking Kirk Cousins’ ill-advised kneel.

Outraged tweets? Hardly any. Rapid-reaction columns about how he should never be voted to the Hall of Fame? Nope. Calls for congressional investigation? Not this time. Instead, relative quiet across the sports kingdom.

Some of the tame reaction to Manning’s purported juicing owes to skepticism about the Al-Jazeera report. Manning has fiercely denied the accusations, and a key source has recanted his story. But there’s more to the collective shoulder shrug than doubts over the veracity of this news. After all, football fans’ apathy toward the Manning report is no different from their reaction to all previous stories of performance-enhancing drug use in the sport.

It’s hard to deny that responses to PED accusations are different in football and baseball. When a baseball star gets busted for taking steroids or HGH, the sport devours itself in righteous debate over how it affects his legacy. When a football star is found to have used a banned substance, fans worry about how many games he’ll miss and how that affects their fantasy team.

In the NFL, Shawne Merriman was voted to the Pro Bowl the same season (2006) he was suspended for testing positive for a steroid. In baseball, Jeff Bagwell and Mike Piazza struggle to reach the Hall of Fame because they seem like guy who might have juiced during their careers. Bill Romanowski was involved in the same steroid ring as Bonds and Jason Giambi, but the former linebacker was mostly shrugged off as a wacko.

This isn’t, as some people suggest, because the guilty baseball stars were particularly likeable. Barry Bonds, Roger Clemens and A-Rod were prickly or worse, but everyone loved Mark McGwire and Sammy Sosa.

It doesn’t seem to be racially motivated. Yes, Peyton Manning is white, and yes the response might be a bit different if this were, say, Cam Newton, but plenty of black guys (Merriman, Brandon Browner, Bruce Irvin) have been busted and prompted limited outrage. Meanwhile baseball has managed to equally crucify Bonds and Clemens, Sosa and McGwire, Rodriguez and Ryan Braun.

And it’s not because baseball players were dishonest. Fans don’t care about players telling the truth, they care about maintaining their illusion of sporting purity.

There are two likely reasons baseball players take more heat for PED use than football players.

Not that football fans’ muted response to PEDs is necessarily a bad thing.

In fact, it seems like for once NFL fans have proper perspective. While baseball blew up a moderate controversy and turned it into a massive one during the 2000s, football dealt with its PED problem quietly, dishing out stern but fair punishments and refraining from moral outrage. Doping isn’t inherently worse than other forms of cheating, but somewhere along the line baseball fans decided it was a capital felony, while football lovers accepted it as a misdemeanor.

Whether or not Peyton Manning took some HGH supplements to aid his recovery from injury shouldn’t matter. If the Al-Jazeera report is true, that means Manning used commonly prescribed drugs to return to health and play a game for your entertainment. At worst, he deserves a quick suspension that punishes his offense but allows everyone to move on to more important things. PEDs certainly shouldn’t tarnish Manning’s legacy as an all-time great or jeopardize his spot in the Hall of Fame.

Sometimes a shoulder shrug is the perfect reaction.