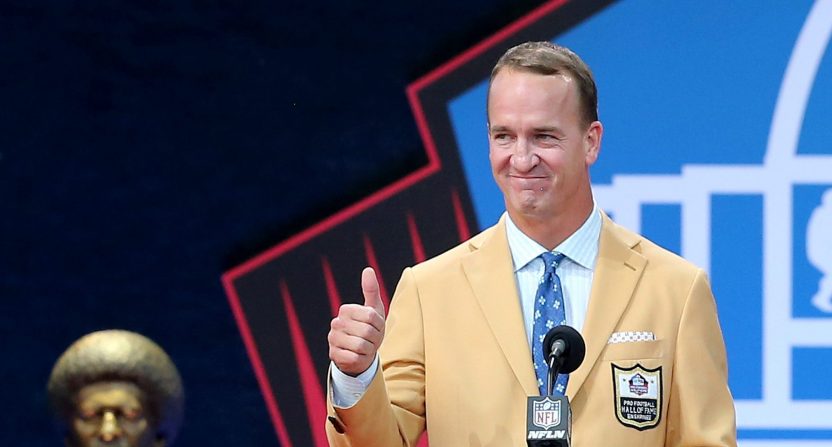 Peyton Manning has long been considered one of the top ambassadors for the NFL and the sport of football. Arguably the NFL’s biggest and most marketable star when he played for the Indianapolis Colts and Denver Broncos, Manning has transitioned into a veteran role in which everybody and anybody related to the NFL wants him involved. That includes ESPN and other networks, who have thirsted over Manning in any attempt to get him to become a full-time broadcaster. While he is dipping his toe in the broadcast booth with an upcoming Monday Night Football foray, Manning refuses to commit and is kinda done being asked about it.

Perhaps that’s why the rumors of Manning eventually becoming NFL commissioner have stuck. In early August, plenty of people were discussing the possibility of Manning one day supplanting Roger Goodell as commish. Manning inadvertently threw fuel on the fire with comments he made during his Hall of Fame acceptance speech.

Commissioner Manning has a nice ring to it https://t.co/knoGwGO0z5

“I don’t know about you, but I am not done with this game. I never will be. I am committing to ensuring its future, and I hope you join me in that commitment.”

ESPN’s NFL insider, Adam Schefter, kept the debate going by saying he thought Manning as commish might just make a lot of sense.

Peyton Manning sounded like he can one day be the NFL Commissioner.

Manning recently appeared on The Bill Simmons Podcast and was asked about whether or not he would ever want to be NFL commissioner. And just as he has for media roles and front office roles, Manning shut it down pretty much completely.

“I don’t where that came from. That was so far off my radar. The only thing I was thinking about in that speech was being on time…all the people that I wanted to thank were there. I got to hug them all after the event, so I didn’t have to say their names. And so you gotta have something else to say, so I said let’s just talk about the game, let’s talk about football, let’s talk about youth football…”

“I think if the NFL is lucky, Roger Goodell does it for another 20 years. I know he takes his bullets but he’s been great for the game. So, I don’t know what you call it…fan of the game, ambassador of the game…that’s what I want to be. I don’t want to be a critic. I wanna be a supporter. And I kinda want to stay on the players’ side…”

So there you go. We always say never say never when it comes to things like this, but Manning seems to be a pretty straight-shooter about his career intentions. He’s certainly earned the right to do what he wants so it’s pretty obvious that he’s going to relish this “ambassador of the game” role for as long as he wants. With two Super Bowl rings, ongoing endorsements, and all the free drinks he’ll ever want in Indiana and Tennessee, there doesn’t seem to be any reason for Peyton to do otherwise.