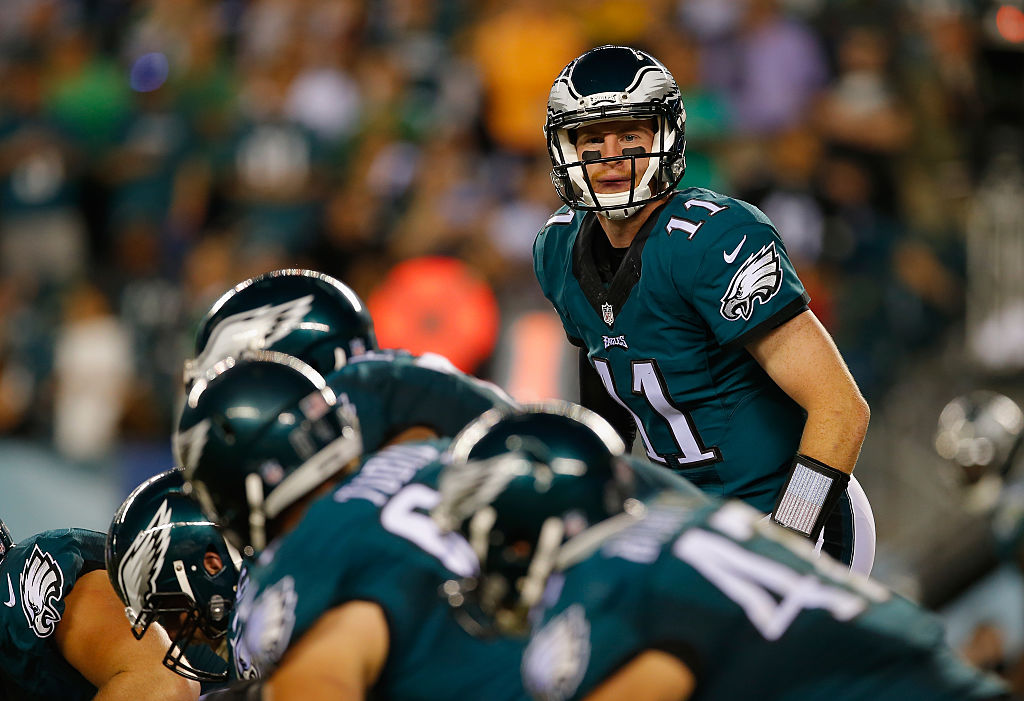 When the Philadelphia Eagles traded quarterback Sam Bradford to the Minnesota Vikings for a first-round pick, the move was viewed as the Eagles throwing in the towel on the 2016 season. The expectation after trading Bradford was for the team to rebuild with second overall pick Carson Wentz at quarterback. But that hasn’t been the reality in Philly, as the Eagles have instead been one of the hottest teams in football.

Fresh out of a run of national titles at North Dakota State, Wentz has the Eagles back atop the NFC East after three games. It’s a turnaround few expected, as the Eagles have made the seamless transition from the Chip Kelly era to the Doug Pederson era. Three straight wins to open the season with Wentz at the helm has lifted the Eagles from a team viewed as rebuilding to one viewed as a contender in the NFC East alongside the New York Giants and the Dallas Cowboys.

Wentz and the Eagles were dominant in their first true test of the season at home to the Pittsburgh Steelers on Sunday. A 34-3 blowout was a big statement of intent from the Eagles, entering an early bye week as one of the NFL’s few undefeated teams left.

.@Eagles QB @cj_wentz proves he is no ordinary rookie.

See every throw from Week 3

The Eagles left little doubt yesterday against the Steelers, dominating Pittsburgh through all four quarters in the win. Wentz and the offense clicked early and often, as the Eagles looked like a completely changed team from their disappointing 2015 unit. A new look roster’s big win over the Steelers is enough to tout the Eagles as a legit contender in a division that appears to be up for grabs entering October.

Wentz was electric for the Eagles on Sunday in what was the best game of his career so far. He completed 23-of-31 passes for 301 yards against a Steelers defense, outdueling Ben Roethlisberger for an important late September win. That win has the Eagles alone at the top of the NFC East summit, the last undefeated team left in the division and one of just five left in the NFL. The 3-0 record is an early sign that this Eagles team could be ready to win their division right away in Wentz’s first season at quarterback.

Beyond the significance of Wentz having one of the best rookie performances in Eagles history is the importance of a big win over a legitimate opponent in the Steelers. Sure, wins over the Browns and the Bears were exciting, but a 34-3 blowout over Pittsburgh was exactly the type of win the Eagles needed to prove that they are for real this season. An early winning streak is enough to get the playoff hype rolling in Philly for an exciting team that is now led by an exciting rookie prospect in Wentz.

At their bye week, the Eagles’ schedule picks up in Week 5 with a road trip to Detroit to take on the Lions. But the Eagles will have a 3-1 record at worst by the time they play their first divisional game of the season. The Eagles should still have a foothold in the NFC East by the time they open play against their division with a Week 6 trip to Washington. That should allow the Eagles to hang around in the playoff race for as long as possible this season. It’s a perfect situation for an Eagles team that needs to continue to build momentum as they look to ride the wave of early-season success into playoff contention.

With five games remaining inside the division and a head start over their NFC East rivals, it is safe to say the Eagles will be contenders this year. With September now over, the Eagles are in first place and overlooking the Giants and the Cowboys. It will be a tough task to keep things together for all 16 games with a rookie quarterback and a team expected to rebuild, but don’t count out the Eagles as a team that could be in the playoffs this January with an NFC East title.