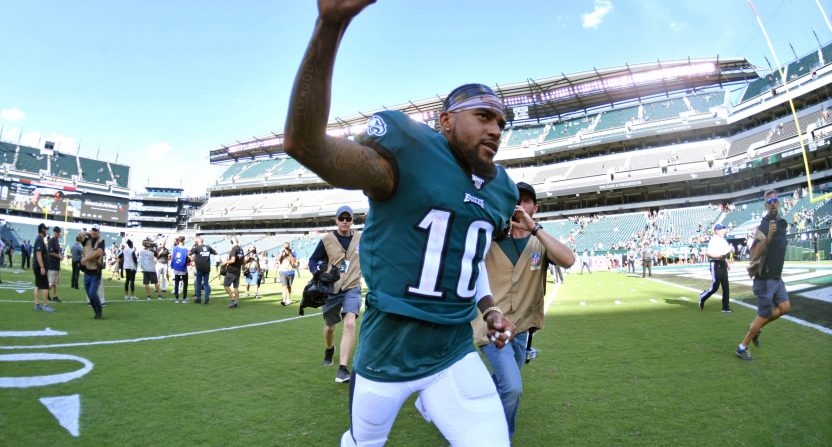 Writing this as someone who grew up in the Jewish faith, I can tell you that there’s nothing Jews enjoy less than hearing non-Jews talk about Jews.

To put it mildly, there’s a lot of history there. Between the stereotypes, the innuendos, the gaslighting, and the flat-out anti-semitism, nothing good ever seems to come from people who don’t know the actual history of the Jewish people commenting on the history or current status of Jewish people. Blaming Jewish people for the problems of others is an all-too-familiar trope that has been employed across the centuries to deflect blame from the actual root causes of problems and that unfortunately continues to this day.

It’s true that you can’t invoke that history right now in a vacuum, especially given the current state of America, the Black Lives Matter movement, as well as the threats of white supremacy that affect so many other groups of people in the country. But all of that doesn’t diminish the impact of anti-Semitism or the triggering aspect of its use every time. No Jewish person sees “Jews” trending on Twitter and expects to see anything good waiting for them on the other side.

The Philadelphia Eagles organization and its players don’t seem to be getting this message.

Last week, Philadelphia Eagles wide receiver DeSean Jackson posted anti-Semitic passages that he thought were attributed to Adolph Hitler on his Instagram feed. As The Comeback’s Phillip Bupp put it at the time, “looking past the fact that he incorrectly attributed the quotes to Hitler, Jackson thought it was and it was still anti-Semitic no matter who actually said that,” so there’s really no good way to spin it. Jackson later apologized and the Eagles released a statement of their own noting how important it was to apologize and try to learn from it.

The Eagles also fined Jackson for “conduct detrimental to the team” and warned that he could be released if he doesn’t “support his words with actions” following the Hitler gaffe. The fine and penalty appear to be equal to the one they handed down to Riley Cooper in 2013 when he was videotaped using the N-word to refer to a Black security guard. At the time many had hoped the franchise would cut Cooper as a strong statement against racism.

While Jackson publicly apologized and vowed to speak with Holocaust survivors and rabbis to learn more, while the Eagles hoped their punishment would move the conversation forward, Jackson undercut the sincerity of his apologies when he liked an Instagram post on Wednesday that seemed to imply his posts were not only valid but that he shouldn’t have apologized in the first place.

At that point, a few other Eagles players jumped into the fray, directly or indirectly, by liking similar posts (not to mention former NBA player and current Showtime host Stephen Jackson). Eagles DT Malik Jackson defended Jackson’s initial post as well as Dr. Louis Farrakhan, who has a well-documented history of anti-Semitism.

This is some serious ignorance https://t.co/4USunIccCW

“The honorable Farrakhan is nothing like that vile scum Hitler. He speaks truth and believes in protection of self and and that scares ur (sic) racist (expletive).. 2nd (Jackson) did not quote anyone he took a PICTURE (of) a book that was to invoke thought and conversation.”

Sadly, that’s basically the “I’m just asking questions” defense commonly used as a way to make wild accusations acceptable by framing them as questions instead of statements. Doing so shifts the burden of proof away from the accuser and onto the accused. In this instance, that would imply it’s on Jews to prove they’re not what that fake Hitler quote makes them out to be. It’s a tactic commonly used by racists and white nationalists. So, that’s not great.

That brings us to Friday when former Eagle and current New Orleans Saints player Malcolm Jenkins posted an Instagram video that was expected to bring some much-needed common sense to the fray. Jenkins has a history of being outspoken about injustice and pushing back against the powers that be in America (look at how he responded to Drew Brees). However, Jenkins’ video response instead positioned the entire saga as a “distraction” from more important issues. The caption under the video read:

“We can honor the Jewish heritage and trauma while staying focused on what matters. Jewish people aren’t our problem, and we aren’t their problem. Let’s not lose focus on what the problem truly is, and that’s that black lives still don’t matter in this country.

“Push this energy toward arresting and convicting the killers of Breonna Taylor and burning systemic racism to the ground.”

Certainly, there are a lot of major issues involving Black people in America right now that are at the forefront of our discussions. And while you can read the words as Jenkins saying that both Blacks and Jews have bigger things to deal with, Jenkin’s energy in the video seems to infer that, as Shalise Manza Young at Yahoo! put it, “it’s as if Jenkins is shrugging at the hatred that Jewish people deal with, dismissing their history of oppression and mistreatment.” Doing so seems to undercut the entire point of everything that’s happening right now.

It’s very true that we should continue to focus on the issues raised by the BLM protests and the ongoing mistreatment of Blacks in America. And we certainly should continue to put energy towards the arrest of Breonna Taylor’s killers and “burning systemic racism to the ground” as Jenkins says. But excusing anti-Semitism by calling it a “distraction” from important issues is not the road to get there, especially when you consider there are Black Jews, Latinx Jews, Hispanic Jews, African Jews, and Jews from every background and region you can think of.

If there’s a fight happening right now, these two communities are on the same side, even if it doesn’t always feel like it. And attempts to undercut that should be examined historically and contextually, rather than just being regurgitated. That’s what the system around us wants. If you see Jews as the “real” enemy right now, you aren’t digging deep enough into why that’s such a trope. And that’s why it’s such a disappointment to see so many current and former Philadelphia Eagles players follow suit.