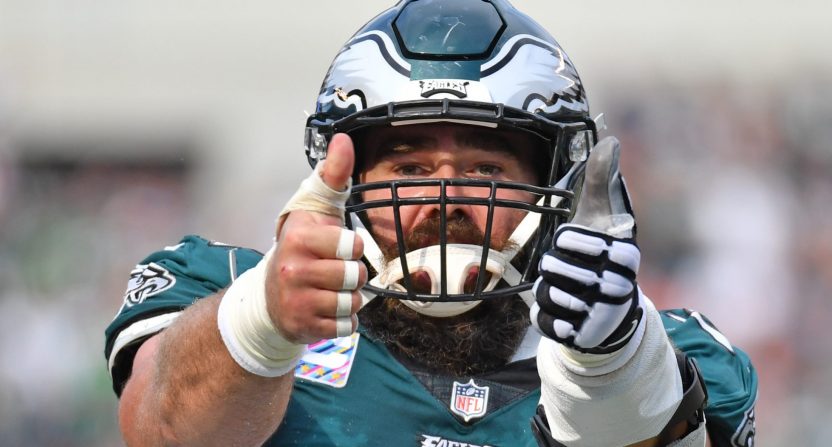 One of the funny quirks to come out of the Ben Simmons situation with the Philadelphia 76ers has been watching Philadelphia Eagles players step up to explain how to succeed in Philly as a professional athlete.

While the drama between Simmons and the Sixers reaches a fever pitch and the mercurial guard is giving local fans every reason in the world to dislike him, multiple Eagles players have now chimed in with their thoughts during press conferences.

First, it was Zach Ertz, who was talking about what it means to play for Philly fans during his final presser as a member of the Eagles. While he didn’t reference Simmons, it was clear who he was referring to.

“These people love their team. They love their Eagles. They love their players,” said Ertz. “This city loves their players. And they wanna see us succeed as much if not more than we want to succeed. And so for me, it’s what I loved about this place. People are honest. They’re blunt. They don’t care about your apology on a game on social media if you played poorly. They want to see you put in the work Monday through Saturday to get better for Sunday. And for me, I think that’s why I resonated with this city. It’s cause all I knew was that. For work hard. And that’s why I love this place.”

Thursday, Pro Bowl Eagles center Jason Kelce was asked about the Ben Simmons saga and offered his own insight, focusing on the notion of accountability.

"Just play better, man. This city will love you."

Jason Kelce just gets it. pic.twitter.com/W6Y2XCIRNi

“I really don’t think this is a hard place to play, to be honest with you,” Kelce said. “You write your own narrative. What’s going on, I don’t want to crush any other players, but what’s going on with the 76ers, Ben Simmons, stuff like that. All that is because of a lack of accountability, a lack of owning up to mistakes and a lack of correcting things.

“If all that got corrected, you fix the free throws, if you’re getting better as a player, none of this is happening. Everybody can b— and complain about how tough this city is to play in. Just play better, man. This city will love you.

Ben Simmons showed up at Sixers facility today for an individual workout and did not participate and left so it is unlikely he will play in Sixers home opener tomorrow night, according to @wojespn pic.twitter.com/hK0I3gEwhj

It doesn’t sound like the situation between Simmons and the Sixers will be resolved anytime soon, or at least in a way where Simmons will be welcomed back by Philadelphia fans. But in the meantime, plenty of Eagles players seem to be using the opportunity to make it abundantly clear that they understand the way to succeed in the City of Brotherly Love (even if the Eagles aren’t, well, succeeding these days).