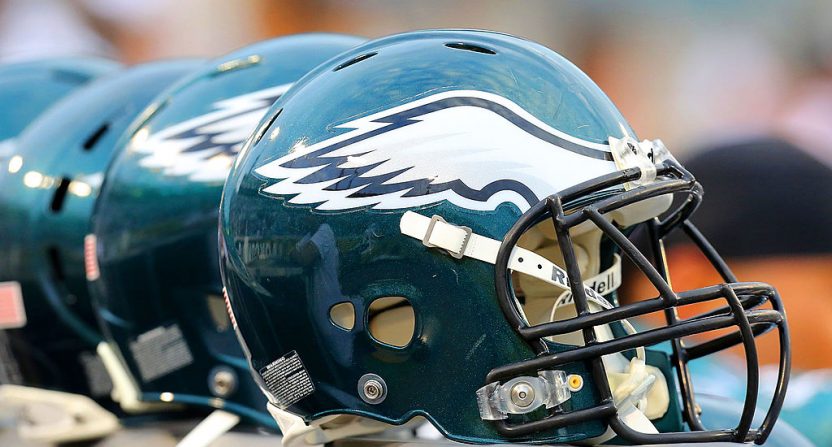 The Philadelphia Eagles generated a little bit of a stir for uniform critics following the NFL this offseason, but a proposal to allow for an alternate helmet design in addition to the standard helmets for each team has been yanked from the agenda by the team.

Specifically, the Eagles filed a proposal to allow teams to wear an alternate helmet in a color that matches the alternate uniforms currently allowed by teams. Unfortunately, they must have had a change of heart and have since pulled their proposal heading into the league’s annual meetings That’s a shame, because the proposal was a good one.

Dave Zangaro of CSN Philly reported, via Twitter, the Eagles rescinded their proposal after hearing feedback from the NFL’s competition committee.

After feedback from competition committee, #Eagles have withdrawn all but one rule proposal, per league source https://t.co/nf1KeAU8Db

Why would such a proposal be yanked? There are a few possibilities, and this is pure speculation with absolutely no inside information. One might be the competition committee informed the Eagles a change to the uniform code may already be in the works, thus making the proposal unnecessary. That’s my hope, at least.

Another might be the wording of the proposal may need to be reworked to provide more definition and clarity to what is being proposed. The Eagles worded the proposal to allow for additional helmets as an equipment precaution. Or maybe the competition committee informed the Eagles there was no chance the proposal would pass after gathering input from potential voters. Let’s hope the Eagles can revise their proposal and the NFL sees the light here when and if a revised proposal is submitted.

As the NFL’s uniform rules apply right now, teams may have one approved third uniform to wear during the regular season a maximum of two times. These uniforms may include matching alternate helmets, so long as they are approved. The catch is these alternate helmets may only be worn with the league-approved alternate uniform. The thing is, sometimes the alternate helmet is better than the main helmet.

The speculation around Philadelphia was the Eagles were proposing this rule change to in order to take a step forward in bringing back the old kelly green look the franchise abandoned in the 1990s in favor of a darker, midnight green. If that was the overall mission of the Eagles, then the NFL could not have passed this proposal fast enough! Of course, it could also be a way to add a black helmet to the uniform that would be included with the Eagles’ alternate black uniforms (which are pure garbage anyway; adding a black helmet isn’t going to make it any better). More kelly green, Eagles. More. Kelly. Green.

The obvious incentive here is always going to be the bottom line. Allowing teams to wear alternate helmets (and jerseys?) opens the doors for plenty of financial incentives and revenue to be generated from merchandise sales. It’s essentially free money for the NFL and their franchises. The minute the NFL decides to let teams to use alternate helmets and uniforms on a more regular basis, teams like the Eagles will have fans lining the stores to purchase all the alternate gear they can afford.

The Eagles were not the only team to file a proposal regarding uniforms. Washington has filed a proposal that would allow teams to opt out of the ridiculous color rush fad on Thursday night games. Let’s pass both of these resolutions as quickly as it takes Chip Kelly to burn out his welcome with an NFL team.

1 thought on “Despite pulling proposal, Eagles’ desire for multiple helmets has merit”