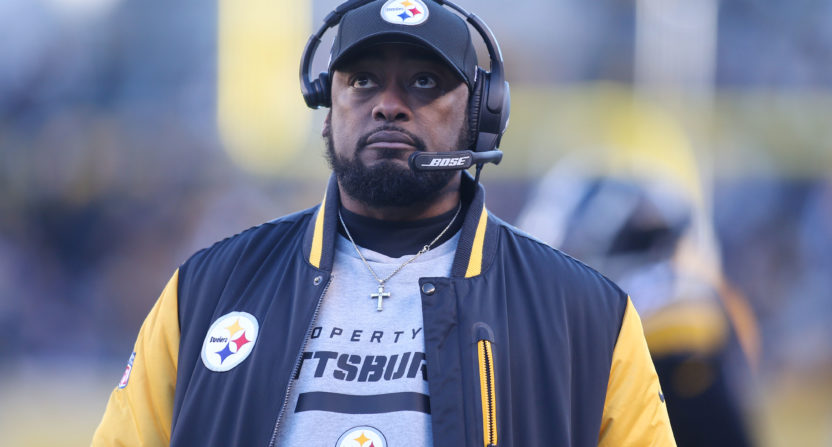 Do those names mean anything to you? If you’re a Pittsburgh Steelers fan, they should. These are the limited partners who, along with the Rooney family, make up the ownership of the franchise. The family was forced to sell off interest in the Steelers almost a decade ago when they became involved in the racetrack industry in a way that violated league rules. As-is, Art Rooney II owns 30 percent of the franchise while several other members of the Rooney family, including Art Rooney Jr., John Rooney, and the McGinley family, own large percentages as well. The rest belong to people such as the aforementioned group of partners, who do not have any authority over the Steelers, but who do have a direct line to Art Rooney.

According to PFT’s Mike Florio, they intend to use it to persuade him to fire head coach Mike Tomlin.

Per Florio, the problem is the “increasingly obvious issues with decision-making in key moments of the game, also known as “situational football.”” He specifically points to the final seconds of this past weekend’s playoff game between the Steelers and Jacksonville Jaguars, when Tomlin’s squad squandered a goal line opportunity to make a last-gasp comeback. They are also allegedly expressing concern over the team’s lack of discipline, citing Antonio Brown’s Facebook Live snafu, in which the wideout accidentally broadcast Tomlin referring to the New England Patriots as “assholes.”

Do their concerns have merit? As usual, it depends on your perspective. The Steelers are one of the last remaining pro sports franchises to invest in their head coach for the long haul. Since 1969, the team has had a grand total of three head coaches and Tomlin has held the post since 2007. Just like his two predecessors, he’s won a Super Bowl, while his 103-57 record gives him a better winning percentage overall than both Chuck Noll and Bill Cowher. His .571 playoff winning percentage is the same as Cowher’s.

On the flip side, Tomlin “only” has one Super Bowl victory (in two appearances), compared to Noll’s four and Cowher’s two (in three appearances). Those were also a long time ago in NFL terms, with the championship coming up on its ten-year anniversary. While Tomlin routinely gets the Steelers into the playoffs, the team has only made it to the AFC Championship Game once since 2011.

Florio says that it’s “not believed” that Art Rooney will give the limited partners what they want, though it may play into his considerations for how much longer Tomlin gets unless, of course, he takes the Steelers back to the Super Bowl soon.  Given his ongoing success, a lot of people around the NFL would think Pittsburgh crazy for cutting Tomlin loose, and you could be sure he’d have his pick of head coaching gigs elsewhere the following season. However, when Super Bowls are your standard, it changes how you view success.

It’s unlikely the Steelers will make a move, especially considering there’s no obvious successor to plug in. But the bug has been put in ownership’s ear. How long they’re willing to live with it remains to be seen.