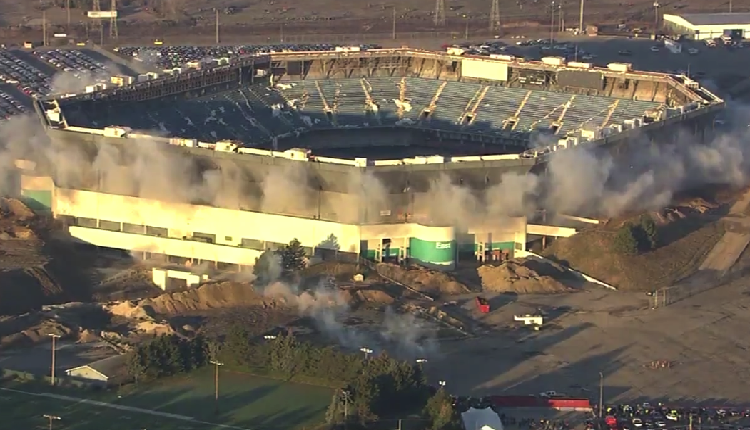 The Pontiac Silverdome, once the home stadium for the Detroit Lions and Detroit Pistons, was scheduled for demolition on Sunday morning. But the implosion of the stadium didn’t go quite according to plan.

Considering we’re talking about the longtime home of the Lions, perhaps it shouldn’t be a surprise that the Silverdome couldn’t even get torn down right.

Here’s video of the failed demolition, courtesy of Detroit’s WXYZ-TV:

WATCH IT: The Pontiac Silverdome failed to fall today. The implosion went off but couldn’t take down the former home of the Lions​. pic.twitter.com/EGIut7u0su

The Silverdome still stands! That old structure, which hasn’t had a regular tenant since the Lions moved to Ford Field in 2002, just won’t allow itself to be erased from memory. At least not yet.

“We just have to wait and let gravity do its job,” construction officials told WZYZ. “It’s going to collapse, we just don’t know when.”

According to construction crews, the implosion charges placed on the stadium’s steel beams worked correctly. But apparently, the Silverdome was “built a little too well.”

Shortly thereafter, the demolition company in charge of the implosion admitted that charges in eight locations did not go off as expected, which will be investigated. The site had trespassers on Friday night. (But if the expectation is for the stadium to fall down, should people really be sent back into the Silverdome to look at why those charges didn’t go off?) Demolition will be rescheduled for a later date.

We're 10 minutes post-explosion & the #Silverdome is still standing. The place must be waiting until the 4th quarter to actually implode.

As you might expect, the former home of the Lions refusing to implode drew many reactions on Twitter.

Once again angry people leave the Silverdome after a disappointing ending pic.twitter.com/6zvEXU8lGz

They tried to implode the Pontiac Silverdome. It didn't work, like most game plans in there on Sundays. https://t.co/lqHurKlRhS

The Pontiac Silverdome becomes the first implosion to wish a bus had shielded it from public view. pic.twitter.com/9PuOV3hWyJ

Just in: Scooby-Doo and the gang just unmasked the Silverdome dynamite button-pusher. pic.twitter.com/mZokRjas6j

According to reports, the Silverdome is now in implosion protocol. Probably out two weeks.

Greatest thing ever right now. The Silverdome won't go down. The way we do things around here, I can't wait for the Palace implosion in 2037.

Watching the implosion of the #silverdome is like watching every lions game for the last 50 years. Expect excitement, get nothing.

Still waiting for official comment from Wile E. Coyote on what went wrong with this morning's Silverdome impolosion. pic.twitter.com/U5j375l4eG

The Silverdome originally opened in 1975. With a capacity of 82,000, it was the largest stadium in the NFL until FedEx Field opened with 91,000 seats in 1997. The Pistons played there from 1978 to 1988, before moving to the Palace of Auburn Hills. (The size of the venue allowed the Pistons to set several NBA attendance records, including largest regular season and playoff crowds.) But the stadium is primarily known as the home of the Lions, who played there from 1975 to 2001.

Pontiac’s stadium also hosted Super Bowl XVI in 1982, the first Super Bowl held in a cold-weather city, and Round 1 World Cup games in 1994, which were the first held in an indoor venue. Other famous events at the stadium include a mass by Pope John Paul II and WrestleMania III, both of which took place in 1987 and attracted 93,000-plus spectators. Concerts by The Who in 1975 (75,692 fans) and Led Zeppelin in 1977 (76,229) set world records for indoor events.

After the Lions moved out, the city of Pontiac could never find a new permanent tenant for the Silverdome. There were rumors of a WHA or CFL team moving in, but those plans never developed. The site was also once considered for a MLS stadium, but those plans fell through as well, likely because developers preferred something closer to downtown Detroit.

Just in case you need to see what a proper stadium implosion looks like, Atlanta got it right a couple of weeks ago with the demolition of the Georgia Dome.