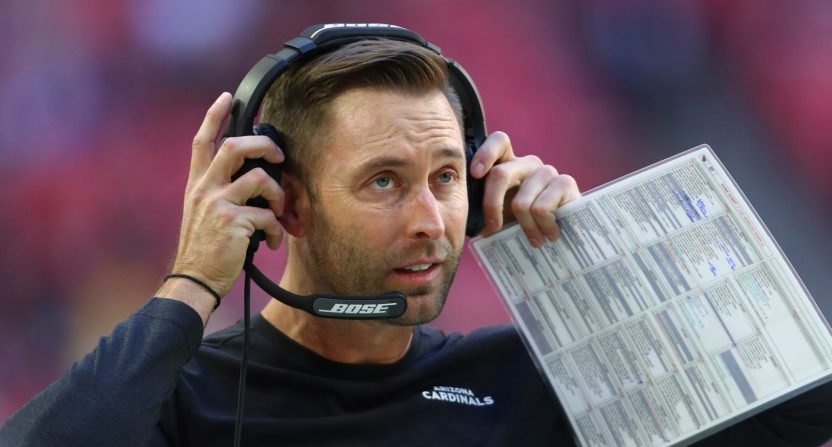 With the 2020 NFL draft in the books and the sports world otherwise quiet, we can at least reconsider the NFL’s new pecking order following a flurry of big developments. Here’s how we rank all 32 teams entering the dead of the offseason:

32. Cincinnati Bengals: The Bengals might have one of the game’s most promising quarterbacks now, but there’s a chance it’ll take time for Joe Burrow to take off, and I’m disappointed they didn’t do more to protect him in this draft.

31. Jacksonville Jaguars: They’ve suffered too many losses, and I’m not convinced Gardner Minshew II can save them.

30. Chicago Bears: They’d fare okay in the tight end quantity power rankings, but the Bears continue to get worse on paper. Free agency and the draft did not help a team headed in the wrong direction. Nick Foles won’t fix them.

29. Washington Redskins: The Trent Williams trade was just a reminder that the Redskins are too dysfunctional to compete. They have a lot of talent, but they’re still missing a left tackle, and the jury’s still out at quarterback.

28. Las Vegas Raiders: Henry Ruggs III could easily bust and is too similar to Tyrell Williams, the defense isn’t improved enough, and they continue to overthink the draft.

27. Los Angeles Chargers: Justin Herbert has high bust potential as well, and committing two Day 2 picks to Kenneth Murray was ridiculous (especially in this deep draft). The Chargers, like the Redskins, are more talented than this. But I don’t trust them at all.

26. Carolina Panthers: They’re rebuilding right and their draft was superb, but it’s still a rebuild and I’m not sold on Teddy Bridgewater or Matt Rhule.

25. New York Giants: Joe Judge is an unknown, we still don’t know what to expect from Daniel Jones and where is the pass rush coming from? The ceiling is high here, but the floor is damn low.

24. Detroit Lions: A healthy Matthew Stafford could take them somewhere, but the rest of their offseason has been confusing. Sometimes they operate as though they’re rebuilding. And Matt Patricia isn’t a good head coach.

23. Los Angeles Rams: They suffered even more losses in free agency and couldn’t compensate for that with limited draft capital. It’s already the end of an era for these Rams, who will eventually realize Jared Goff isn’t good.

22. New England Patriots: They’d be in the bottom 10 if not for Bill Belichick. It’s a bottom-10 roster, though.

21. Tennessee Titans: Derrick Henry and Ryan Tannehill aren’t sustaining what happened down the stretch in 2019, especially without Jack Conklin.

19. New York Jets: Look at the depth chart and it’s easy to figure this is a playoff team in a wide-open division. The problem is Adam Gase.

18: Denver Broncos: Still need to see it from Drew Lock, but he’s completely surrounded by talent now, and they have some killer pieces on defense. This could be a breakout season, but a lot could still go wrong.

17. Houston Texans: Bill O’Brien is terrible at his job and they’re much worse now than they were at the end of the 2019 campaign. Simple as that.

16. Green Bay Packers: I still love the defense and the running game, but we’re past the point of assuming Aaron Rodgers can save the passing offense. I’m losing faith in this team despite an NFC championship appearance.

15. Minnesota Vikings: They entered the offseason in a terrible financial situation and have navigated perfectly. The defense lost some luster, but they should still have a shot in 2020. Love their draft.

14. Indianapolis Colts: They’re still loaded with talent on both sides of the ball and are better off at quarterback now, but what does Philip Rivers have left?

13. Dallas Cowboys: The offense could be unreal and the defense is far from being a liability even without Byron Jones. But something just hasn’t felt right with this team of late.

12. Buffalo Bills: They’re now loaded pretty much everywhere, but Josh Allen remains a wild card. If he can become a star, they’ll be a prime Super Bowl contender.

11. Tampa Bay Buccaneers: Not sure I trust Tom Brady and Rob Gronkowski at this stage, but they’re better than Jameis Winston and O.J. Howard. And Howard might still be there! Gotta love the receiving corps and the emerging defense.

10. Cleveland Browns: This team has top-five talent, but questions at quarterback and a lot of ghosts to fight.

9. Atlanta Falcons: They went on a tear in the second half last season and are better on paper now. Would have still been better off with coaching changes, but there’s a chance they could make a 2016-like run in 2020.

8. Pittsburgh Steelers: Take the best defensive team in the NFL and add Ben Roethlisberger. That’s all you need to make the top 10 these days.

7. Seattle Seahawks: Russell Wilson. Everything else is meh, but Wilson and his supporting cast can be the difference.

6. Philadelphia Eagles: If they can stay healthy (particularly at quarterback) and Jalen Reagor can come through, the sky’s the limit for the 2017 Super Bowl champs. Don’t forget they also added Darius Slay.

4. New Orleans Saints: The Saints hardly ever change, and that’s fine because they have more wins than anyone else in football the last three seasons.

3. Baltimore Ravens: The offense is set for the league’s only 14-win team from 2019, and now they’ve added Calais Campbell and Patrick Queen on D. Come on!

1. Kansas City Chiefs: So long as they have a healthy Patrick Mahomes, the defending Super Bowl winners deserve the top spot.