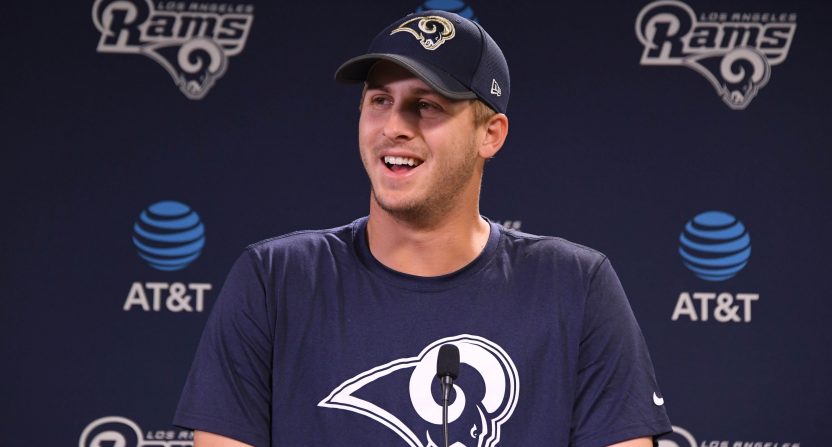 With the heart of free agency in the books and the draft now out of the way, we have a pretty good feel for how all 32 NFL teams will look in the fall. Or at least what they’ll take into training camp in August.

So this seems like a good time to check in on the state of the league with a batch of post-draft power rankings. How does each team rate against the competition with their new infusion of new, young talent from the college ranks?

1. Los Angeles Rams: The Rams didn’t do anything in the draft but are now loaded with Ndamukong Suh, Aqib Talib and Marcus Peters joining an already-stellar defense. Look for one of the youngest and most talented teams in football to be even better than it was when ranked second in football in terms of Football Outsiders’ Defense-adjusted Value Over Average in 2017.

2. New Orleans Saints: We’re fired up to see what that historically good rookie class will do with a full offseason under its belt. New Orleans got better in the offseason after posting the top DVOA total in the league in 2017.

3. Minnesota Vikings: A 13-3 team actually upgraded at least slightly at quarterback by going from Case Keenum to Kirk Cousins. Sheldon Richardson is a nice signing and first-round cornerback Mike Hughes could help right away.

4. Philadelphia Eagles: The defending Super Bowl champions suffered some typical losses, and they face questions at the quarterback position.

5. New England Patriots: It’s been a tough offseason tangibly and intangibly, but Tom Brady and Rob Gronkowski are returning and Bill Belichick is still the head coach. As long as that’s the case, a team that has played in three of the last four Super Bowls should be considered the favorite in the AFC.

6. Jacksonville Jaguars: Arguably the most talented team top-to-bottom in the NFL, the Jaguars would be Super Bowl favorites if they had a top-tier quarterback. There’s some hope for Blake Bortles, but not enough to get them into the top five at this point.

7. Pittsburgh Steelers: So long as Ben Roethlisberger, Antonio Brown and Le’Veon Bell are running things, the Steelers will be Super Bowl contenders. Some promising youth there, too, with JuJu Smith-Schuster and T.J. Watt likely to become stars.

8. Atlanta Falcons: The 2016 Super Bowl finalists should bounce back after dealing with a Super Bowl hangover in 2017, especially if the offense can find a groove in Year 2 under the tutelage of Steve Sarkisian. Matt Ryan has some serious weapons, and that young defense is extremely talented.

9. Green Bay Packers: A healthy Aaron Rodgers alone keeps the Packers in the top dozen, but landing Jaire Alexander and Joshua Jackson in the first two rounds of the draft was a coup. Green Bay looks much improved and if Rodgers can stay on the field, they’ll be in contention.

10. Houston Texans: Before Deshaun Watson went down with a November knee injury the Texans were lighting up the league on offense. Re-add him and throw J.J. Watt back into the fray on defense and you’ve got a playoff-caliber team, especially if Tyrann Mathieu can get back to where he was a couple years ago.

11. Los Angeles Chargers: The Bolts always have bad luck with tough-break losses and injuries, but the fact is they’re one of the most talented all-around teams in football. Add Derwin James to that secondary, which will continue to benefit from the presence of Joey Bosa and Melvin Ingram up front, and you’ve got a hell of a lot of support for Philip Rivers and the highest-scoring Chargers offense.

12. Kansas City Chiefs: This has to be viewed as a boom-or-bust season for a team that will be relying on essentially a rookie quarterback and has major questions on defense. The Chiefs remain decently-ranked because they’ve got so many damn weapons on offense and Patrick Mahomes has a high ceiling.

13. San Francisco 49ers: The trajectory is promising after a hot five-game finish to the 2017 campaign and a strong offseason which saw the 49ers add pro-ready offensive tackle Mike McGlinchey in the draft as well as Richard Sherman, Jerick McKinnon and Weston Richburg in free agency.

14. Tennessee Titans: It all comes down to what Marcus Mariota does, but the Titans have sure given him a lot of support entering his fourth NFL season. Malcolm Butler, Dion Lewis and Bennie Logan in free agency, as well as Rashaan Evans and Harold Landry in the first two rounds of the draft? That’s a thing of beauty.

15. New York Giants: Expect the Giants to look more like the 2016 team that made the playoffs than the 2017 team that won just three games. Odell Beckham Jr. is back, Nate Solder and Will Hernandez should bolster the offensive line, Saquon Barkley is a top candidate for offensive rookie of the year and the defense has plenty of talent. The Giants just have to stay healthy for Eli Manning.

16. Chicago Bears: The 2018 Bears remind me a lot of the 2017 Rams. Exciting new coaching staff, high-potential sophomore quarterback, a bunch of new weapons in the passing game, top-notch back and several strong young defenders.

17. Washington Redskins: The Redskins were crushed harder by injuries than any other team in the NFL last season. The law of averages is on their side, and I don’t think going from Kirk Cousins to reigning passer rating leader Alex Smith will hurt them. Also, love those top two picks (Da’Ron Payne and Derrius Guice).

18. Dallas Cowboys: Didn’t like their draft and they haven’t been players on the free-agent market since, like, 2005. That said, Ezekiel Elliott’s suspension is behind him and Dak Prescott is better than he was last season. The defense has some pieces, too, so the Cowboys should compete in 2018.

19. Carolina Panthers: Cam Newton has the ability to take over games, and the front office has surrounded him with some weapons now. Still not enough, though, and his inconsistency combined with an aging defense could make it tough for Carolina to keep up with New Orleans and/or Atlanta in the NFC South.

20. Oakland Raiders: Derek Carr is still Derek Carr, and if he’s healthy again after an injury-derailed 2017 campaign, Oakland will have a shot. That said, Jon Gruden’s odd approach to his first offseason doesn’t bode well. Kolton Miller in Round 1? When you’ve got that many questions on defense? A Raiders team that has suddenly become really old might have trouble keeping pace with Los Angeles and/or Kansas City in the AFC West.

21. Tampa Bay Buccaneers: It’ll come down to what Jameis Winston can do in his fourth year, but he certainly has a lot of support with O.J. Howard and Chris Godwin entering Year 2 alongside Mike Evans and DeSean Jackson in the receiving corps. The defensive line has also become one of the best in football on paper, but there are questions beyond that.

22. Denver Broncos: There’s definitely a chance to bounce back from an off year now that Case Keenum is at quarterback and Bradley Chubb is supporting Von Miller. That said, the AFC West is tough, Aqib Talib is gone and Keenum could be a one-hit wonder.

23. Detroit Lions: How much can one team rely on its quarterback? If Matthew Stafford finally puts it all together, Detroit could be a Super Bowl team. But if he doesn’t, the Lions will likely be out of the playoffs again. I like that they’ve built up the offensive line, but it’s been a rather bland offseason for a 9-7 team.

24. Seattle Seahawks: Russell Wilson would have to win MVP for the gutted, reloading Seahawks to get to the playoffs in the toughest division in football. That could certainly happen because Wilson is incredible, but he just doesn’t have enough support on either side of the ball.

25. Baltimore Ravens: Joe Flacco is a bad quarterback and he continues to lack weapons. A good defense isn’t going to cut it, even if Alex Collins continues to flourish in the offensive backfield.

26. Arizona Cardinals: The Cards are rebuilding, even if they won’t admit it. Sam Bradford won’t likely stay on the field and Josh Rosen will probably need some time in that offense. And on the other side of the ball, there are a lot of questions beyond Chandler Jones and Patrick Peterson.

27. Indianapolis Colts: Andrew Luck now has plenty of support on offense, but there’s no telling what, if anything, he’ll bring to the table in 2018. Besides, the Indianapolis defense remains a mess at worst, a work-in-progress at best.

28. Cincinnati Bengals: Yet another stale offseason for a franchise coming off back-to-back losing campaigns. Andy Dalton is a middle-of-the-pack starter and there’s only so much A.J. Green can do. Plus, the defense isn’t what it used to be.

29. Buffalo Bills: They were a fluke playoff team last year, but the Bills are destined to come back to earth while starting AJ McCarron and/or the raw Josh Allen under center in 2018. Not a lot of support on offense and the D often lacks bite.

30. Cleveland Browns: A team coming off a zero-win season isn’t ranked last? I get the feeling the Browns will make major strides in 2018 after improving immensely this offseason. Tyrod Taylor is a good bridge quarterback and he, Jarvis Landry, Carlos Hyde and Nick Chubb should excel while working with a strong offensive line. Plus, Myles Garrett should take off in his sophomore season. And don’t forget about Josh Gordon. They’ll still suck, but not close to as much as they did the last two years.

31. New York Jets: Sam Darnold will need time and Josh McCown has his limitations, especially in an offense that lacks weapons in a major way. The Jets overachieved with five wins in 2017 and actually got worse by losing Austin Seferian-Jenkins, Demario Davis and Muhammad Wilkerson in March.

32. Miami Dolphins: A team that won six games in 2017 appears to have lost faith in a quarterback (Ryan Tannehill) who has missed the last 20 games. And on top of that, the Dolphins are coming off an offseason in which they lost their best offensive player (Jarvis Landry) and their best defensive player (Ndamukong Suh). It’s gonna be a brutal year.