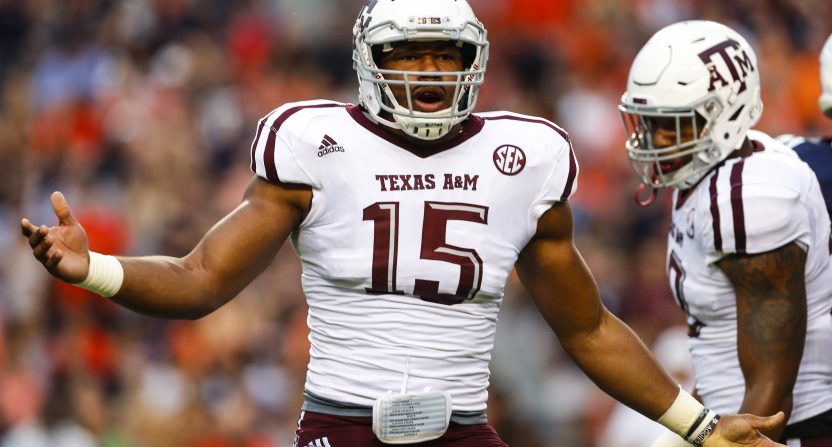 Texas A&M defensive end Myles Garrett made his way to Indianapolis with very little to prove, but that did not stop him from profoundly impressing the draft scouts gathered for the NFL Combine. Garrett is expected to be a top draft pick in the 2017 NFL Draft, and he could very well be the top overall pick. None of that changed following his showing in Indy.

Garrett, a defensive end, displayed his blazing speed with a 4.64 40-yard dash, his power and athleticism with a 41-inch vertical jump and 10-foot-8-inch broad jump, and his raw strength by benching 225 pounds a whopping 33 times on Saturday. If that is not a physical display of pure strength and skill, what is?

Myles Garrett at the combine:

I asked a respected front office executive how Myles Garrett looked in combine drills. Answer: 'Like a job saver.' @nflnetwork

Myles Garrett had 1.5 fewer sacks in three years than Von Miller had in four, and we're having "production" discussions?

Compare the numbers put down by Garrett with 2014 No. 1 overall pick Jadeveon Clowney. Clowney only managed 21 reps on the bench press during his combine workout and came roughly four inches shorter than Garrett’s vertical jump. Clowney did have a faster 40 time, with a 4.53.

No matter how you slice it though, Garrett showed why draft scouts have been lauding him as a potential No. 1 overall pick coming out of college. And you better believe the Cleveland Browns were keeping tabs.

DE Myles Garrett makes his case for No. 1

As anyone who follows the combine knows, physical workout results are just a part of the process. Teams also want to see how these players handle themselves in interviews and in front of a room full of reporters. Once again, Garrett seemed to shine by showing off a bit of a sense of humor.

Myles Garrett asked if he could sack any QB says Tom Brady without hesitation. Why? "I'm a Peyton Manning fan."

Garrett was also confronted about a video in which he pleaded for the Dallas Cowboys to trade up to get the draft pick needed from the Browns so he could play for Dallas. It was all in good humor, but it rubbed some Browns fans the wrong way. In spite of that, Garrett said he just wants to get to the NFL so he can “dominate here and not make any more crazy videos.”

Of course, if Garrett does want to avoid playing in Cleveland, there are ways to make it happen…

If I'm Myles Garrett I'm leaking a video of myself smoking weed ASAP. Gotta do whatever it takes to stay out of Cleveland