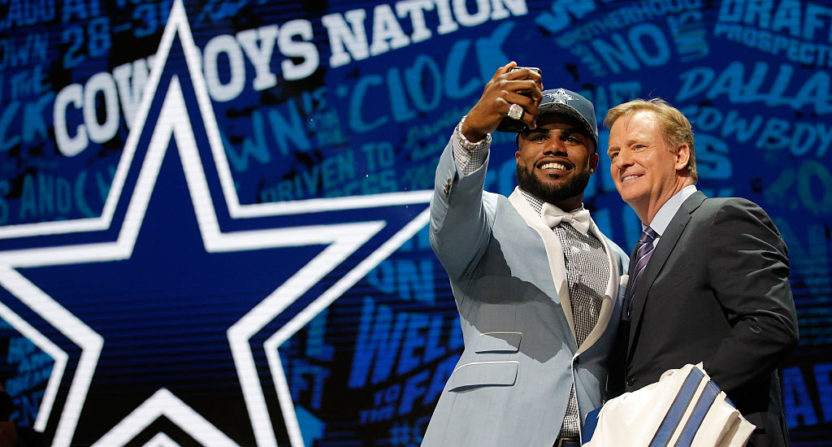 It dragged out too long. It was unnecessary. The timing was inconvenient. The drama was ridiculous. Well, after weeks and weeks, the mess is finally over and Ezekiel Elliott is one week into his six-week suspension.

But then again, maybe that was the point? Maybe going into the season, the Dallas Cowboys and their Owner/General Manager/biggest fan Jerry Jones wanted to drag out this process as long as possible. It’s possible that in Jones’ mind, and Elliott’s as well, the longer they dragged it out the more likely it could be that Elliott’s suspension was vacated entirely.

OR, there is another possibility. Maybe, just maybe, the Cowboys’ mindset here was the following:

If Elliott’s suspension occurs later in the season when the Cowboys have a big NFC East lead, he’ll be fresh for the playoffs. If the Cowboys stumble out of the gate, the running back can serve his suspension when Dallas is struggling towards the finish line. Or maybe the suspension will be served as the Cowboys are on the edge of the playoff picture and late enough that Jones can go after Roger Goodell for his role in all of this.

I think the Cowboys went with option #3 (with a little bit of #2 mixed in).

At this point, the likelihood that Dallas would’ve won the NFC East even if Elliott played the rest of the season is very low. The Cowboys are currently 5-4 while the Philadelphia Eagles are sitting pretty at 8-1. As for an NFC Wild Card Spot, well Dallas is still kind of in that race.

The two NFC Wild Card spots are currently owned by the Carolina Panthers (7-3) and Seattle Seahawks (6-3). Trailing them in the standings are four teams with a 5-4 record: Dallas, Green Bay, Atlanta, and Detroit. Right now however, the Cowboys are last among those four teams in the tiebreaker scenario, meaning they need to jump over all three and then one wild card spot to make it in.

But enough about the standings, because sorry Dallas you aren’t making the playoffs. That was only half of option #3. The other was the Cowboys dragging out the process to make the NFL look ridiculous and give Jones an opening.

Over the last couple of weeks, the Dallas owner has tried to go after Goodell’s job and his contract negotiations, likely as a retaliation measure for the Commissioner’s role in suspending Elliott. Now this is backfiring in a way for Jones as the Wall Street Journal has reported that NFL owners have quietly discussed ways to kick Jones out of their exclusive club.

I mean this is just ridiculous at this point. This whole mess can be compared to Tom Brady’s suspension fight with the league a couple of years ago. While deflating footballs and alleged domestic violence are two completely different things, we didn’t see Robert Kraft go after Goodell’s head. We also didn’t see Jones complaining about unfair treatment towards Brady. Of course now we are because Jones’ prized running back is at the center of the fight.

Here’s the thing, this whole mess is stupid. On one hand, Elliott should’ve just taken the suspension at the start of the season, because if he did, it would’ve been over for 5 weeks by now! On the other hand, Jones is just being ridiculous here by trying to get payback at Goodell for the suspension. This is the same guy that employed and played Greg Hardy after his terrible past.

96! Can you imagine a baseball player getting in a fight with the league and the battle dragging on for a whopping 96 games? Players in the clubhouse would probably lose their minds. I would imagine something similar happened, albeit quietly, in Dallas’ locker room.

For one, it dragged on way too long in a back-and-forth confusing as hell battle. Additionally, it’s not like the team was playing well enough for this to keep going on. If the Cowboys were leading the NFC East or at least owning a wild card spot that would be one thing for players to keep in mind.

But once again, Dallas is 5-4 and currently 10th in the NFC. They aren’t in a playoff spot and finally after nearly 3 months, this long stupid battle is over.

1 thought on “Praise be, the Ezekiel Elliott mess is over”