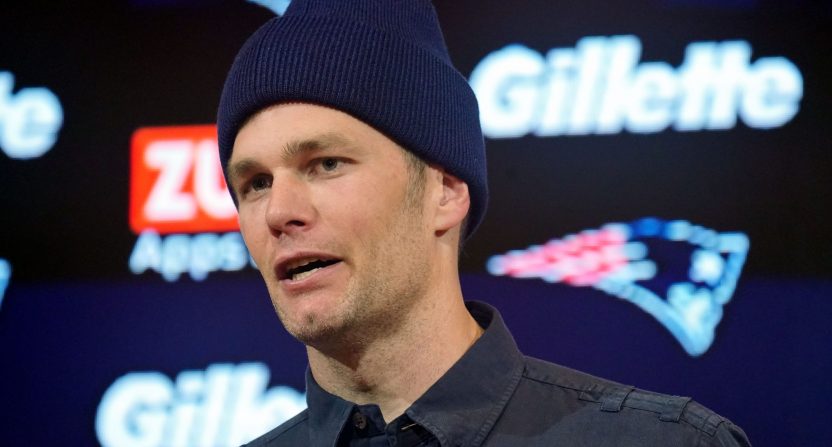 The quarterback carousel is expected to spin so violently this offseason that it just might snap off its platform and crush a Honda Civic in the carnival parking lot. By the time the debris has been cleared, here’s who we figure will be starting for every NFL franchise:

Arizona Cardinals: Kyler Murray — Fair to say the reigning offensive rookie of the year and No. 1 overall pick has at least several more seasons as Arizona’s go-to guy.

Baltimore Ravens: Lamar Jackson — The reigning MVP will likely sign a long-term deal in the next year or two.

Buffalo Bills: Josh Allen — The 23-year-old 2018 No. 7 overall pick has flashed just enough the last two years for the Bills to believe he could become special.

Carolina Panthers: Derek Carr — It looks like the Panthers are prepared to move on from Cam Newton, so a trade with the Raiders makes some sense. Carr is a little younger and a little cheaper for a team that is trying to reload.

Chicago Bears: Mitch Trubisky — General manager Ryan Pace will stubbornly hold on for one more year in hopes that his 2017 No. 2 overall pick can finally come through. But look for the Bears to add someone like Marcus Mariota as well.

Cincinnati Bengals: Joe Burrow — The top quarterback in this year’s draft might not be thrilled about it, but the Bengals will likely force him to either sit or sign as the No. 1 overall pick. They’re old-school that way.

Cleveland Browns: Baker Mayfield — There’s no doubt that the 2018 No. 1 overall pick will get at least one more year to prove himself in Cleveland.

Dallas Cowboys: Dak Prescott — Even if they can’t come to a long-term agreement before the start of the new league year, the Cowboys will almost certainly hit Prescott with the franchise tag.

Denver Broncos: Drew Lock — They invested a high-second-round pick in Lock last year, and he flashed just enough as a rookie to earn a Week 1 shot in 2020.

Detroit Lions: Matthew Stafford — Despite ludicrous trade rumors, the Lions can’t afford to trade the expensive and still-talented Stafford. He was quietly a top-10 quarterback before getting hurt in 2019.

Green Bay Packers: Aaron Rodgers — Rodgers has really faded, but he’s also too expensive to unload. The Packers have to keep rolling with him, but they ought to find a potential successor soon.

Houston Texans: Deshaun Watson — The 24-year-old two-time Pro Bowler is in line for a big extension in Houston.

Jacksonville Jaguars: Gardner Minshew II — Nick Foles had a couple flashes in the pan with Philly but isn’t a great quarterback. Minshew has something special to him and should beat out Foles this summer.

Las Vegas Raiders: Cam Newton — Jon Gruden has never seemed satisfied with Carr, and Newton would be pretty intriguing as the franchise moves to Las Vegas.

Los Angeles Chargers: Tyrod Taylor — All signs point to the Bolts giving Tyrod Taylor the bridge job, and I think they will do that before eventually handing the reins to their first-round pick. Justin Herbert is probably the safest guess there.

Los Angeles Rams: Jared Goff — Financially, the Rams and Goff are handcuffed to each other.

Miami Dolphins: Ryan Fitzpatrick — I think they will draft Tua Tagovailoa but won’t rush him on to the field, which means more Fitzmagic for a while.

Minnesota Vikings: Kirk Cousins — And don’t be surprised if the Vikings hand the dude an extension in order to free up 2020 salary-cap space.

New England Patriots: Teddy Bridgewater — He’s a smart, accurate passer with upside, which would tempt Bill Belichick once Tom Brady gets away for an extra $10 million.

New Orleans Saints: Drew Brees — This has pretty much been confirmed now.

New York Giants: Daniel Jones — It will be the 2019 first-round pick’s first full season as an NFL starter.

New York Jets: Sam Darnold — Big third season for Darnold, who made strides as a sophomore.

Pittsburgh Steelers: Ben Roethlisberger — Big Ben looks like he’s out of gas and is coming off a major elbow injury, but the Steelers owe him big bucks and will give it at least another year.

San Francisco 49ers: Jimmy Garoppolo — This might not be 100 percent, but it’s highly doubtful the 49ers change quarterbacks after a Super Bowl season. They’ve said as much.

Seattle Seahawks: Russell Wilson — They made him the highest-paid player in league history last offseason.

Tampa Bay Buccaneers: Tom Brady — The Bucs know they have to move on from the turnover-happy Jameis Winston, and Brady would be the perfect bridge for a team that is in position to win now. They have the money, and they can offer Brady better coaching and more support than anyone else.

Tennessee Titans: Ryan Tannehill — At the very least it appears they will slap the franchise tag on Tannehill after he posted the league’s top passer rating in a breakout season.

Washington Redskins: Dwayne Haskins — The No. 15 overall pick of the 2019 draft deserves a full season under center in D.C.