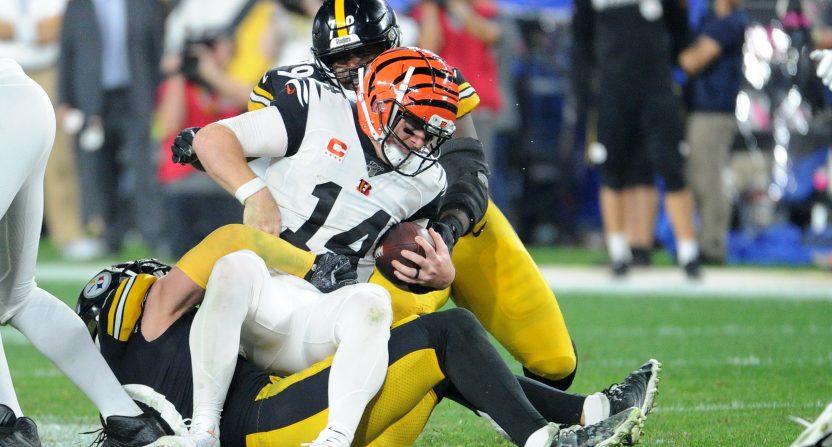 The bottom of the NFL looks worse than it should just four weeks into the season. There are some bad, bad teams. If you put yourself through the snoozefest that was Monday night’s Steelers-Bengals game (both teams entered the night winless), you got a glimpse of just how awful the NFL’s bad teams are (and the talent level usually only gets worse with injuries deeper into the season).

In the embarrassing 27-3 loss, Cincinnati looked like a team primed for the top pick in the 2020 NFL Draft. But, believe it or not, there may even be multiple teams worse than the Bengals. There are still six winless teams, and it’s possible a few teams remain winless for a while.

Here’s our guess at when the winless teams finally get a victory:

The Cardinals at least haven’t suffered a loss in every game. Arizona’s season opener vs the Lions resulted in a 27-27 tie. That was also the NFL debut of No. 1 overall pick Kyler Murray  and head coach Kliff Kingsbury, and the Lions have looked like an impressive team since (2-1, and almost beat the Kansas City Chiefs on Sunday). The Cardinals also hung in there in Baltimore with a 23-17 loss to the Ravens in Week 2.

Arizona could get better as the season goes along, with Murray potentially figuring things out at quarterback. And all of their next three games are winnable: at the Bengals, vs the Falcons, at the Giants. They should get in the win column at least once in those three games, and we’ll go with the home game vs an up-and-down Falcons squad.

The Bengals looked absolutely awful on Monday night against the Pittsburgh Steelers, with the second half effort particularly pathetic.

AJ Green does not want to be a Bengal lmao

Picking them to win their very next game seems crazy on the surface, but it’s against another winless team in the aforementioned Cardinals. These feel like even teams (though the Cardinals are certainly trending in the better direction), and the Bengals get a home-field boost; they’re currently a four-point favorite according to most sportsbooks.

So, we’ll say the Bengals win at home in Week 5, but with very little confidence! It’s not hard to see them remaining winless for a long while. Right now, the Bengals likely wouldn’t be favored for another game until December (when they host the Jets and play the Dolphins in Miami), if at all.

The Broncos haven’t been as bad as their 0-4 record says. They had leads until literally the final second against the Bears and Jaguars, only to lose on walk-off field goals.

But, all that ultimately matters is that they’re 0-4, and they just lost star second-year pass rusher Bradley Chubb (torn ACL) for the season (they especially wish they’d kept Shaq Barrett now). They also may trade excellent cornerback Chris Harris. So, the talent level on this team is only getting worse.

At the moment, the Broncos may be underdogs in every remaining game, but they’re not that bad. They’ll likely find a way to win a few games, and they’re certainly due for some better luck. We’ll say things finally go in their favor for the Week 6 game vs a 2-2 Titans team that is very hard to figure out.

And here’s a full-on dumpster fire. Multiple Dolphins players requested a trade after a *Week 1* loss. Just over a week later, the Dolphins indeed traded one of their best players in defensive back Minkah Fitzpatrick. This organization isn’t hiding that they’re tanking, and the front office is surely all about the team not winning a game in 2019 in order to lock up the No. 1 draft pick in 2020.

And good news for the front office: there’s a decent chance that happens! The lifeless Dolphins have a -137 point differential on the season, and it’s really hard to imagine an NFL team being worse than this one so early in the season. This looks like an expansion franchise in Week 17 after a myriad of injuries.

Then again, the Dolphins’ next opponent doesn’t look much better, and the game will be in Miami. The Dolphins host the Redskins in Week 6 after a Bye, and Five Thirty Eight even has it as a pick ’em game at the moment.

However, this team is just so, so bad… it would feel like a crime to actually pick them to win a particular game. Maybe they find a way to win or two in this Week-to-Week league, but it shouldn’t be expected at this point.

Darnold is likely at least a week or two away from returning, and the Jets’ schedule is in a brutal stretch to boot: at the Eagles, vs the Cowboys, vs the Patriots, and at the Jaguars over their next four games. Darnold’s absence to go with the schedule figures to quickly derail the Jets’ season, and an 0-7 start looks like a very real possibility.

The Jets at least have a cupcake ready to be devoured in Week 9 with a matchup against the Dolphins in Miami, and the schedule softens considerably in the back half. Five Thirty Eight even has the Jets favored in seven of their final nine games.

Washington looks terrible and has no idea what to do with their quarterback situation.

Jay Gruden not sure on Redskins starting QB for next week. Evaluating all three options, see where the guys are after Wednesday’s practice.

Case Keenum has six turnovers over the last two games, and was replaced by rookie quarterback Dwayne Haskins in the team’s 24-3 loss to the Giants. Haskins proceeded to throw three of his first 17 NFL passes for interceptions. And now-healthy veteran quarterback Colt McCoy is back in the mix. All of these options are bad in the short-term; Haskins could become something, but it’s hard to see him being very successful in the immediate future, especially with very little help around him.

The talent on this roster is severely lacking to the point that beating *the Dolphins* in Week 6 may take a great effort. And if that game turns into a loss, well, it may be Washington and not Miami that has to wait until next season for a victory.