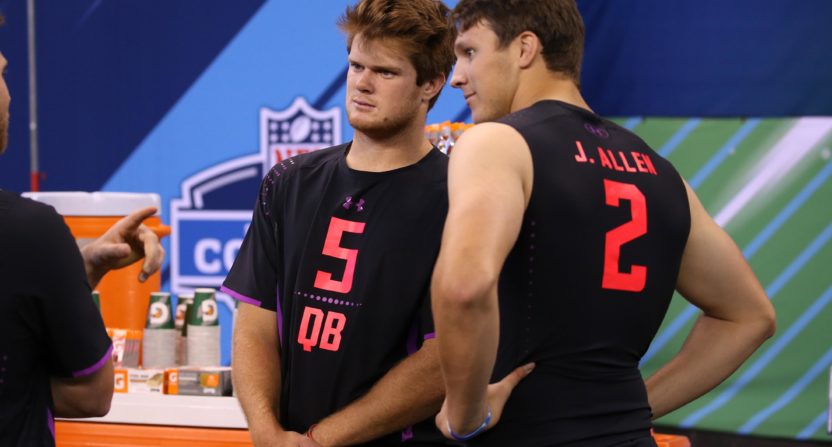 NFL free agency is, like, done. At least as it pertains to the quarterback carousel. All seven teams that were in the hunt for quarterbacks have signed at least one.

Clubs that may still be eyeing a quarterback with their top pick added a likely starter in free agency. The Denver Broncos signed Case Keenum and the New York Jets brought Teddy Bridgewater aboard. Even the Cleveland Browns traded for Tyrod Taylor.

So where does that leave Josh Allen, Sam Darnold, Josh Rosen and Sam Darnold? Here’s what makes the most sense now:

What they did: Traded for Tyrod Taylor, traded DeShone Kizer away.

What they’ll do: No way they’re putting all of their eggs in Taylor’s basket. He’s a so-so 29-year-old quarterback entering a contract year. He’s cheap enough to be a stopgap with some upside. This is the year they finally draft a quarterback in the top 10, and it’s going to happen.

Prediction: They take Sam Darnold with the top pick.

What they did: Signed Case Keenum, traded Trevor Siemian away.

What they’ll do: Focus elsewhere with that No. 5 overall pick. They could use a middle-to-late-round selection on a guy like Kyle Lauletta, Mike White or Luke Falk, but there’s a chance they go with Keenum and Paxton Lynch for at least one year. They’re paying Keenum to be more than just a bridge quarterback.

Prediction: They take Kyle Lauletta in Round 4.

What they did: Signed Josh McCown and Teddy Bridgewater.

What they’ll do: Nothing for at least one year. McCown is there to help transition to Bridgewater, who should get an opportunity to prove whether he’s worthy of being the guy. If he isn’t, they’ll turn to the top of the draft in 2019.

Prediction: They stand pat and Bridgewater becomes the franchise quarterback by Thanksgiving.

What they did: Traded Tyrod Taylor, signed AJ McCarron

What they’ll do: McCarron is a cheap insurance policy with upside. They’re still itching to move into the top five to grab a quarterback who can compete with McCarron right away.

Prediction: They move into the top five and take Josh Rosen.

What they did: Signed Sam Bradford and Mike Glennon, for some reason.

What they’ll do: Draft whichever quarterback slips to them in the middle of the first round, although they could move up a few spots to lock somebody in.

Prediction: They find a way to draft Josh Allen and give him a chance to learn behind Bradford and Glennon.

What they did: Re-signed Drew Brees.

What they’ll do: Nothing. Brees had a phenomenal 2017 season and they aren’t in a position to add any of the top quarterbacks in the draft.

Prediction: Unless one of the big four slides to the bottom of the first round, they’re probably going to give it at least a year. As we saw this week, it’s now possible to land a franchise quarterback outside of the draft.

What they’ll do: Nothing. Cousins is making $28 million a year and they have his backup now too.

Prediction: They do not even consider drafting a quarterback at any point.

Other teams in the running for a top quarterback prospect

New York Giants: They’ll probably sell that No. 2 pick to the highest bidder (Buffalo?) and once again delay their quarterback search.

Miami Dolphins: I think Miami will be in the right place at the right time and will wind up with a chance to take Baker Mayfield in the No. 11 spot. Can’t turn that down. That makes Ryan Tannehill a candidate to wind up with the Jets, Giants or Saints (or any of the teams below) in the next year or two.

Washington Redskins: They’ll probably hang with Alex Smith for a year but draft a middle-rounder like Lauletta, White or Falk.

Baltimore Ravens: Lamar Jackson in the No. 16 spot?

Los Angeles Chargers: Lamar Jackson in the No. 17 spot?

Pittsburgh Steelers: Lamar Jackson in the No. 28 spot?

New England Patriots: Mason Rudolph was made to be a Patriot.