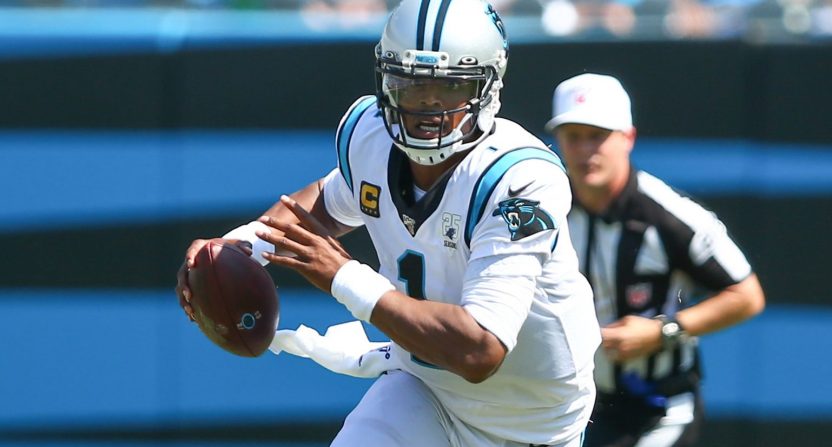 Nick Foles jumped to the Jacksonville Jaguars, Joe Flacco was jettisoned to the Denver Broncos, Ryan Fitzpatrick and Josh Rosen moved to the Miami Dolphins, and Case Keenum joined the Washington Redskins, but that was about it in terms of starting-caliber veteran quarterbacks.

However, 2020 looks like it’ll be a hell of a lot more complicated now that the feces is hitting the fan at the quarterback position on a wide array of NFL rosters. Here’s a rundown of which well-known quarterbacks could be on the move in the upcoming offseason.

Gotta include a question mark there because Brady isn’t likely going somewhere new at the age of 43. But his contract expires after this season and ESPN’s Adam Schefter has floated the idea that the six-time Super Bowl winner could finish his career elsewhere.

The soon-to-be 38-year old’s contract is set to expire. And while he seems like he’d rather retire than play outside of Southern California, you wonder if he’s growing tired of never winning with the Bolts. I wouldn’t completely rule out a move up the coast to San Francisco or Oakland.

The Panthers appear to have something in 5-0 interim starter Kyle Allen, and they used a third-round pick on Will Grier in 2019. They can save $19.1 million by moving on from Newton, who hasn’t been the player he once was. Still, you’d think the uniquely talented former MVP would have his pick of the litter as a 30-year-old free agent. I could see it coming down to Pittsburgh, San Francisco. and Oakland, with the 49ers the top destination if they move on from Jimmy Garoppolo.

Allen looks like he could be the long-term answer in Carolina, but the Panthers could trade him if they decide to stick with Newton and roll with Grier as a backup. You’d think they could get a huge bounty for the 23-year-old, but I think they’ll actually keep him over Newton.

All signs have been pointing to Dak signing a long-term contract in Dallas, but he’s listed anyway because he’s technically nine regular season games away from becoming an unrestricted free agent.

Bridgewater has probably done enough during his undefeated stint in place of Drew Brees to earn a starting job somewhere. He’s not the player Newton is, but he might be more steady. Chicago can appreciate that, and would view him as a worthwhile veteran upgrade over Mitchell Trubisky.

He’ll be 41 after this season, so anything’s possible. In all likelihood, he’ll return to New Orleans or retire. But he could be forced out if the Saints opt to lock of Bridgewater instead.

He looked toast before suffering a season-ending injury, and I think this time off will convince a tired, seemingly out-of-shape 37-year-old to take his $232 million in career earnings and walk away. Then the Steelers will have to decide whether Mason Rudolph is right for the long-term job.

Not even Elway will likely be willing to pay Manning as a starter now. If he doesn’t wind up in Denver, he’ll walk away.

Flacco looks completely resigned, and I don’t think he’ll want to be part of what looks like a rebuild in Denver. Doubt the Broncos want him back either.

I don’t think Jon Gruden is satisfied with Carr as his quarterback, so much so that I could see Oakland joining San Francisco and Pittsburgh in the Newton sweepstakes. Ultimately, though, Elway will trade for Garoppolo, freeing up the 49ers to bring in Newton.

Elway has limited rope left. He can’t afford to draft another quarterback and wait, and Flacco won’t cut it in 2020. Garoppolo and Newton make a lot of sense, but the former is probably cheaper and definitely younger. Besides, he’d have no choice to come over in the event of a trade. I think Newton would pick San Francisco over anyone else except maybe Pittsburgh.

His injury history is a concern, but nobody else will probably be willing to take that on either. Plus, Foles is expensive. He’ll have a dead cap number of $33.9 million in 2020.

The Minshew Magic is almost gone. Jacksonville could consider an offseason trade, but they might prefer to keep him in place as Foles insurance.

The Bears have to realize Trubisky isn’t the answer, and I’m sure they’d trade him if they could. But I’m not sure anyone would see him as a starter right now, so he’ll have a chance to “compete” with Bridgewater this summer.

Watch for Tennessee to go back to the draft well and let Mariota walk to a fresh environment. The Seahawks, Browns, Texans, Chiefs, Cowboys, Giants, Panthers and Cardinals all make sense.

Ditto for the Bucs regarding the draft. Winston has worn out his welcome. I’d watch for him to reunite with former Bucs coaches in either Atlanta or Cleveland.

I think the Bengals realize it’s time to use a first-round pick on a quarterback, especially since they’ll likely have a top-five selection. I’m expecting Cincinnati, Miami, Tennessee and Tampa Bay to most aggressively chase quarterback prospects early in the draft, while the Bears, Broncos, Steelers and possibly Raiders and 49ers instead look for veteran upgrades.