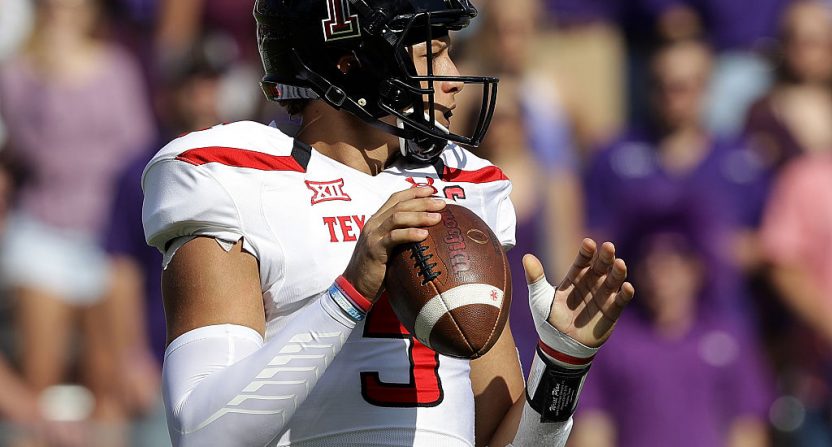 Andy Reid has been here before.

The head coach of the Kansas City Chiefs has plucked his quarterback of choice in the NFL Draft before, and the results have been mixed. Drafting and developing Donovan McNabb was a clear success in Philadelphia, but the Kevin Kolb experiment was the beginning of the end for Reid with the Eagles.

In the 2017 NFL Draft, the Chiefs took a gamble by drafting a quarterback Reid thinks he can groom for greatness, but getting Texas Tech quarterback Patrick Mahomes up to speed to be capable of leading the offense could require patience.

Texas Tech has had a rough history with sending big-armed quarterbacks off to the NFL, but it would be unfair to suggest Mahomes will fail simply because he played at Texas Tech. It is not unfair, however, to suggest he will take some more time to polish and prepare for being worthy of being Kansas City’s franchise quarterback. Reid will face that pressure, perhaps even more than Mahomes.

“One of the strengths of his game is his creativity when he leaves the pocket,” Chiefs head coach Andy Reid said in a Q&A on the team’s website. “So, however he gets the ball out, he gets the ball out. We’re going to give him some fundamentals that he can work on, and then, you go from there. The bottom line is that the ball is being completed. That’s really the bottom line there.”

This statement alone shows that Mahomes is probably a bit of a work in progress. This is not unexpected for any player, especially a quarterback, stepping on the practice field for the first time at a spring rookie camp. Of course there is a learning curve for Mahomes, just as there would be for any rookie. The concern is how long it takes Mahomes to adjust to running Reid’s offensive system after coming from the wide open world of Big 12 football, where Texas Tech’s offensive strategy was more than likely to pass it on first, second and third down, and fourth down when needed.

“It’s definitely learning. More so just going through the process and making the mike ID, calling the play and making sure everyone is in the right position,” Mahomes said in a press conference with media after a Chiefs rookie camp practice. “It’s a lot more than I had at Texas Tech but we’re learning as we go and we’re getting better every single rep.”

Among the differences between Reid’s offense and that run at Texas Tech? The terminology used.

“The words are pretty difficult but you get those down. It’s about knowing what’s happening when you say the words,” Mahomes explained. “You can’t just say them and not know what’s going on. For me, it’s all about knowing what’s going on the entire play and knowing why coach is calling this play.”The good news for Mahomes is he has a coach in Reid who previously worked with Brett Favre and McNabb, and the results there have been solid. But it is also fair to point out Reid also tried this once before with Kolb. Mahomes may be better than Kolb ever was, so at least he has some potential upside to look forward to, but making the transition from Big 12 gunslinger to NFL quarterback is not easy, especially from an offense as wide-open as Texas Tech’s.

How well Mahomes grabs a hold of this and manages to run the offense remains to be seen, obviously. However, the obstacle standing in Mahomes’ way now regarding the language and calling plays is not uncommon for quarterbacks coming from a pass-happy offense in the college level and taking their game to the NFL.

It turns out, playing in a pass-heavy Big 12 offense is not an issue facing just quarterbacks. Former Baylor wide receiver KD Cannon may be hindered by it as well. Cannon made the decision to leave Baylor with a year of eligibility remaining and declared himself eligible for the NFL Draft. He was one of the underclassmen that was left undrafted and signed a free agent contract after the draft with the San Francisco 49ers. After one rookie minicamp with the 49ers this past weekend, Cannon had been released by the team. One of the reported issues was a lack of ability to work with route trees.

Let’s be clear in saying Cannon has a much tougher road to travel to becoming a star in the NFL than Mahomes does, but the pressure to develop Mahomes to get to that point is much higher for both Reid and the quarterback himself. Reid needs this to work. Kansas City took a plunge with Mahomes. If it doesn’t work out, the Chiefs may need a plunger to clean up the mess.