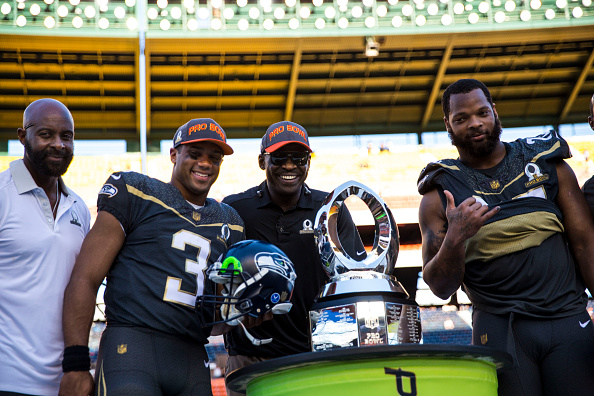 Hawaii must have Russell Wilson air.

Wilson was named MVP of the 2016 Pro Bowl on Sunday night, an honor in a game that continues, year after half-hearted year, to re-define the word “value.”

Players on the Green Bay Packers were playing against their own coaching staff. Bobby Wagner tackled his Seattle teammate Richard Sherman—who was installed on offense because literally nobody cares what happens at the Pro Bowl outside of a player getting hurt—for a 22-yard loss, one of 10 different players to carry the ball for Team Irvin. And they won.

At one point in the game, Michael Bennett, another Seahawk making the trek after two straight years in the only NFL Bowl that actually matters, carried the ball for seven yards before getting two-hand touched to draw a whistle because who in their right mind would want to try to tackle Michael Bennett in the open field?

Odell Beckham Jr. played safety. Travis Kelce reminded us one week before Cam Newton and Von Miller take the field in the Super Bowl that dancing sensually is okay when white players do it.

The game was barely football, being played by mostly alternates, and yet tens of millions of people tuned in to watch, waiting all day for Sunday night’s closest-thing-we-can-get-to-football on the first week of the year since before Labor Day without real, live football.

Americans are addicted to football. The Pro Bowl, as bad as it is, is our methadone.

ESPN led the Pro Bowl telecast talking about how this year’s event felt like a “Futures Game” with so many first-time players in Hawaii. While some of those first-timers certainly deserved the vacation reward as an NFL All-Star this season, others were almost literally chosen because no one else in the league would say yes.

There were 41 players on each Pro Bowl roster, with 17 “pre-selected” to each team early in the week and the remaining 48 drafted by Rice and Irvin during a made-for-television event a few days before the game. That’s 82 players who made the trip to Hawaii for the Pro Bowl, added to another 44 players—something of a dubious record—who were selected to the game but didn’t go. Ten of those 44 players are Carolina Panthers, and another four are Denver Broncos, which means that still 30 players selected for the Pro Bowl declined due to either injury, or flat lack of interest.

That’s not difficult math. Of the 28 players from the four best teams in football selected to the Pro Bowl, two actually showed up to the game. And yet, tens of millions of people watched the game, because we are addicted to football. If that’s what they still call it in Hawaii.

Let’s not forget, to be fair to some of the players half-pacing it through the game, that the regular season ended 28 days ago and some of them haven’t put on a set of pads in at least that long. For some, they haven’t played meaningful football in even longer than that, so getting out of the game unscathed is a win for all involved.

More and more people wring their hands about the existence of the Pro Bowl each year, and without question the game should be scrapped in favor of a more fan-friendly event where the players can show off their personalities and have more fun without the pressure of playing a “real” game in front of a half-empty stadium in Hawaii because even the locals who get to see football once a year (again) don’t care enough to show up. The NFL gave tons of tickets away to local football teams and community groups and still they couldn’t paper the house in Hawaii.

The NFL and NFLPA will hopefully come to some sort of agreement on how to ensure the top players in the game actually show up in future years, because this season was ridiculous. And it’s making people mad.

It actually bums me players don't appreciate the pro bowl trip like they used to. The best of the (cont) https://t.co/WxVdH5GU3H

Still, as some in the sport complained about the lack of interest in this year’s game, it’s not unprecedented. Ten seconds of Googling came back with this gem: The Pro Bowl following the 1989 season was slated to pit Joe Montana and John Elway against each other one week after the 49ers crushed the Broncos in the Super Bowl, but they both had “elbow” issues. Both Boomer Esiason and Don Majkowski missed that game as well, and the only selected quarterback to play that year was Warren Moon. Here’s a quote from Roger Goodell, yes, the same Roger Goodell who runs the NFL now, who served as Pro Bowl coordinator that year.”

“The quarterbacks were hit hard this year. I know Elway really wanted to play, but I understand that his elbow really swelled up the day after the Super Bowl.

“I know Montana’s elbow is an on-going problem; I think they were still talking about the possibility of off-season surgery. He’s a tough guy and I’m sure he would like to be here if he could.”

Even 16 years ago, Goodell couldn’t help himself from lying to fans to protect the shield. And the Pro Bowl.

The game should have been scrapped way back then in lieu of an NFL Skills competition. Imagine flying out to Hawaii, or more sensibly, the location of the Super Bowl, to compete in one or more of the following challenges:

To be honest, who wouldn’t rather see Richard Sherman carry and egg on a spoon than rush for negative 22 yards and get tackled by his teammate? He probably would too.

And yet, we watch. Because it’s football. Because Russell Wilson threw for three touchdowns and saying that sounds like there might have been something resembling a real game.

With one game left in the season, America is jonesin’ for more football. Or whatever that was on Sunday night.