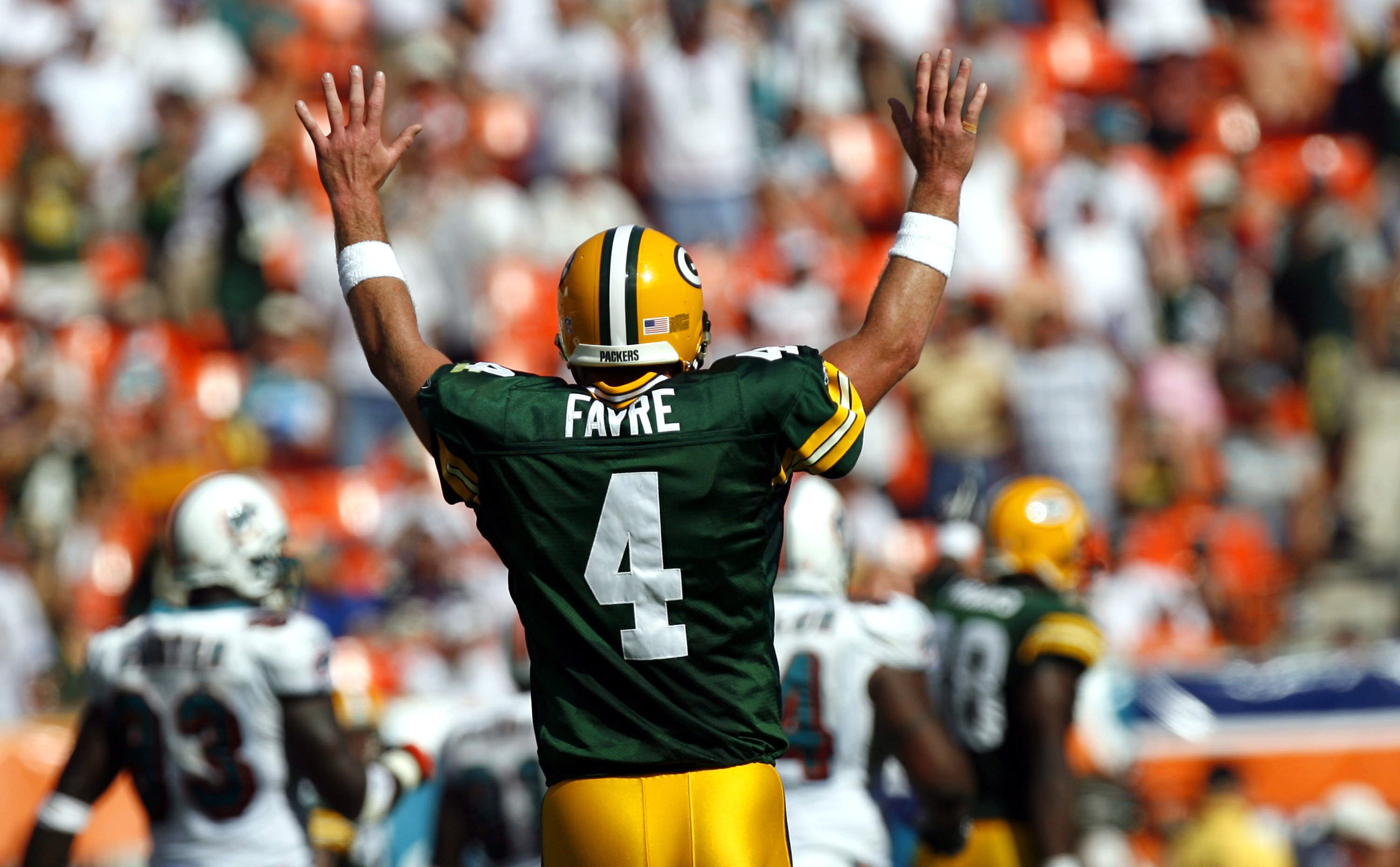 The NFL and Pro Football Hall of Fame announced Thursday the list of its 15 Modern-Era finalists up for enshrinement this year, cut from a list of 25 semifinalists that came from an original list of 108 nominees. The list includes Brett Favre, Terrell Owens, Tony Dungy and a list of some really great and pretty good players the committee will vote upon in advance of the Super Bowl.

Of those 15 candidates, no more than five will make it to the Hall of Fame this year, the end of a very convoluted process for induction, culminating in a ‘yes or no’ vote from the 46-member committee during Super Bowl week. From ProFootballhof.com, here is a look at the final rounds of a year-long selection process:

In advance of the Hall of Fame Selection Meeting in February, the selectors are provided detailed biographies on each of the 18 finalist candidates.  At the annual meeting, each of the nominees is thoroughly discussed by the committee before a series of reduction votes are taken.  First, the senior candidate(s) and Contributor candidate(s) are discussed and voted on for election.  They must receive the same 80 percent affirmative vote as the modern-era candidates.

Next, there is a vote that reduces the modern-era finalists list from 15 to 10.  Following that, a vote is taken to reduce the list from 10 to 5 names.  The five remaining candidates for Hall of Fame election are then voted on individually (yes or no) for membership. In order to be elected a finalist must receive a minimum of 80% of the vote.

What’s funny is that the Hall of Fame—and NFL—calls the list of 15 members “finalists” but then cuts down those 15 to 10 and, eventually, five before deciding if those five are worthy of selection or not. So really, by their own admission, being a finalist is more like being a quarterfinalist. 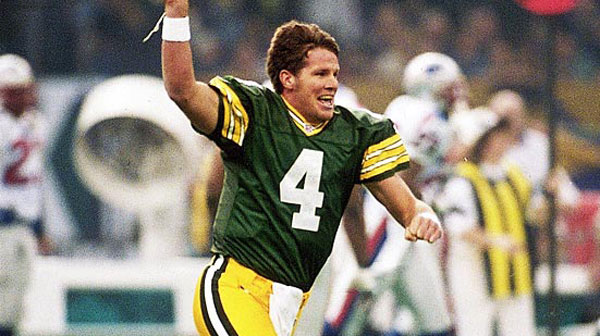 It’s somewhat amazing that the Pro Football Hall of Fame voters didn’t draft a rule to allow Favre in immediately upon retirement, and I’m only partly kidding. One of the greatest quarterbacks to ever play the game, Favre was beloved by NFL media, winning three-consecutive MVP awards and one Super Bowl, playing in nearly 300 straight regular-season games. Favre is the guy NFL media think of when they tell people how awesome their jobs are. “I got to cover Brett Favre.” For one more day, they do.

Favre is as big a lock as anyone in the history of the game to get in on the first ballot. He could murder Peter King in the street the day before the vote and the other 45-remaining members would make a “gunslinger until the end” joke and still put him in.

Remember the list of 15 finalists is cut down to 10 then cut to five and those five get discussed and voted upon, needing 80 percent to be included. So really, the 80 percenters are the true finalists out of the 15 finalists. History says there’s a good chance all four of these men will get in, as five modern-era candidates have been enshrined more times in the last ten years than not. Having said that, who else is on the list often impacts whether a player gets voted in, as players like Tim Brown had to “wait” until other wide receivers were selected before him.

It’s a weird and stupid process, like all Hall of Fame voting. Which means some of these deserving candidates may have to wait until another, theoretically more deserving man, gets in.

This is what Elliot Harrison at NFL.com wrote about Greene’s candidacy. Tell me this isn’t ridiculous.

Last year’s group represented accounting work on the part of the voters — that is to say, cleaning up old debts. Charles Haley, Tim Brown and Will Shields certainly deserved to be enshrined, and they waited a long time to get that phone call, as did Jerome Bettis. The one leftover from that group is Kevin Greene. With Junior Seau making it in on the first ballot, no room was left for his contemporary at linebacker. All good. Greene’s 160 career sacks are going to be almost impossible to ignore again.

“Hey, Kevin, we wanted to invite you to the party but our apartment is like SUPER small Junior was here already and Jerome parked his bus outside and then the cops came and it was a whole thing because it was in front of a fire hydrant an, ugh, we totally should have invited you. Next time, though I promise. All good?”

Greene is getting in.

Harrison has been a finalist each of the last two seasons without getting inducted, watching Andre Reed and Tim Brown go in before him. It seems impossible that Harrison won’t get in this year, given the other names on this list and given Harrison is third all-time in receptions and seventh in yards in NFL history. He’s getting in eventually, and given the other options this year, it seems likely 2016 will be his season.

Dungy has been a finalist for three years now, and if he’s going to get in, putting him in the same year as Marvin Harrison makes sense (unless voters want to wait for some reason until Peyton Manning gets in.) Dungy is a borderline candidate for induction as a coach, but his work as a mentor in the league for both players and up-and-coming coaches will absolutely help his cause. If Dungy is ever getting in, this year seems like the logical time.

Warner’s numbers aren’t that, say, historically legendary because of his late start and sputtering mid-career stint as a back-up, but he did win two MVPs and took the Arizona Cardinals, of all teams, to a Super Bowl later in his career. He’s getting in, and this year seems to be the year.

Pace is on the ballot for the second year and while it’s somewhat ridiculous he didn’t get in last year, Will Shields was “first in line” for linemen. Pace will get in this year.

Wait until next year…

Like Harrison, T.O. could also be punished by the voters for his off-the field antics. Of course Harrison’s off-field antics involved a much-publicized shooting in Philadelphia, while T.O.’s involve driveway sit-ups in the city’s suburbs. Antics nonetheless.

While there is no character clause in the football Hall of Fame voting, it’s hard to believe a room full of 46 NFL writers don’t take personality into account when cutting from 15 to 10 to 5. There’s been talk for years that players, in all Hall of Fame voting, are left out because they are jerks. So that’s another reason to think T.O. won’t get in on the first ballot.

The biggest reason may be history.

The last time two players from the same position got into the Hall of Fame was 2005, when Dan Marino and Steve Young were the only players inducted. In 2002, tight end Dave Casper and wide receiver John Stallworth both got in, the last time two pass-catchers of any position were inducted in the same season.

The last time two receivers at the same position got in on the same year? Go back to 1970, when Tom Fears and Pete Pihos, both listed as “end” were selected.

Andersen will simply have to wait until a year when there aren’t five better candidates, which is silly considering the kicker is the NFL’s all-time leading scorer. This “wait for next year” could be a few next years for kickers.

Lynch was a great safety for Tampa, and being a member of the media calling games for Fox has kept him relevant and on the minds of the fellow media voting each year. It’s likely he will get in, and looking at this list he’s probably more deserving than someone like Dungy, his former coach, but he may have to wait a year or two more. Lynch has been a finalist twice before, and was a semifinalist in 2013 when he didn’t make the final 15, so he is screaming “wait in line” with his induction.

It’s also notable that only 10 safeties have ever been inducted into the Hall of Fame, three of which also played cornerback at times in their careers. Historically, safety was not an easy position to stand out, which is part of the reason Lynch should be in Canton.

Like Pace before him, Faneca will get into the Hall of Fame, but it won’t be until other linemen get in first. This is Faneca’s first year on the ballot, so it would be something of a shock if he got in this year given the system, deserving or not.

Coryell is something of the “hipster” candidate, if a coach who hasn’t been on the sidelines in 30 years can be considered that. As the NFL goes to a wide-open passing attack where rookies are putting up 4,000-yard seasons like it’s nothing, what Coryell brought to the game is getting more and more attention, recognition and consideration.

It’s probably not going to happen, but it should…

Davis should be in the Hall of Fame, but it’s looking more and more likely he won’t ever get in. Maybe in a weak class he could garner enough votes, but too many of those casting the votes penalize him for a short career. And yet, Davis is one of only seven men to ever rush for more than 2,000 yards in a season, he was a three-time first-team All-Pro and led Denver to back-to-back Super Bowl titles before succumbing to injury that derailed his career.

Davis played in just 78 games and has just—just—7607 yards in his career in the regular season, but his eight playoff games featured 1,140 rushing yards—an average of 142.5 yards per playoff game—and 12 touchdowns. Those are insane numbers, and worthy of consideration every year until he (hopefully) gets in.

James won two rushing titles and has more than 15,000 yards from scrimmage in his career, including three seasons of more than 2,000 scrimmage yards. He was the 1999 NFL Rookie of the Year. He was a semifinalist last year, and may get more consideration as he stays on the ballot, but it’s unlikely he gets in this year or perhaps even in the next few seasons.

An honor just to be nominated…

Becoming a Hall of Fame finalist should be a big deal, but not as big as getting in, which has to be frustrating. Atwater was a smash-mouth safety who played the game as hard as anyone, ever. If he was in the game today, though, he’d be fined almost every week. As the game goes to a safer style, players like Atwater will cease to exist. I don’t know if that will help or hurt his future candidacy.

Jacoby was an anchor for the Washington Hogs, and may have to wait in line behind other more noteworthy linemen for as long as he’s still in the conversation. Still, an honor for both to make it this far.