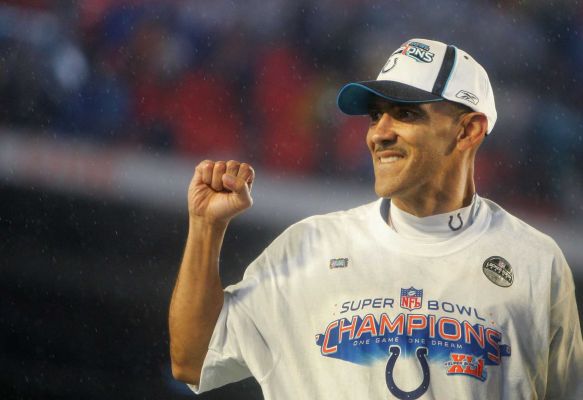 Sometimes, life owns a sense of absurdity. Saturday night, it displayed a profound sense of poetry.

On the night before Super Bowl 50, which could very well be Peyton Manning’s last NFL game, the man who won his only NFL title with Manning as his quarterback was voted into the Pro Football Hall of Fame.

Tony Dungy, who guided the Indianapolis Colts to their only Super Bowl championship in February of 2007, received the call from the football Hall on Saturday. He becomes the first African-American head coach to enter the Pro Football Hall of Fame.

Some will say that Manning carried Dungy into Canton, an understandable point of view. A number of observers — critical of this selection by voters — will point to Dungy’s lack of multiple Super Bowl titles, and more specifically, multiple Super Bowl appearances as a head coach. Dungy is the first African-American head coach to win the Super Bowl (XLI against the Chicago Bears), but he never returned to the big game after winning it in his first attempt.

Dungy’s inclusion into the Hall might be debated by some, but anyone who is upset at this inclusion needs to consider the other coaches who are already enshrined in Canton. Dungy deserves to be in this select brotherhood; it’s just that a few other coaches probably should have entered before him.

At this link, you will find a list of the coaches in the Pro Football Hall of Fame. Al Davis is more an owner and executive than a coach, though “coach” is one of the titles included on his Hall of Fame page. If you exclude Davis, only three coaches without a league championship are on the list. Two of them, Bud Grant of the Minnesota Vikings and Marv Levy of the Buffalo Bills, reached four Super Bowls and unquestionably deserved inclusion. The one other coach without an NFL title is George Allen, who coached the Los Angeles Rams and Washington Redskins (combined) for just over a decade in the 1960s and 1970s. Allen certainly fixed the teams he inherited, and he never had a season worse than two games over .500. However, Allen won a playoff game (two, to be precise) in only one season. He reached one Super Bowl.

Dungy’s career credentials are clearly better than Allen’s. If anything, this selection magnifies why Allen is the coach with the weakest Hall of Fame resume.

Without Peyton Manning, Dungy might have found it harder to win games as regularly as he did in Indianapolis, but the point remains that he got out of the way and didn’t cause problems. It’s true that the Colts didn’t do as well as they could have (and probably should have) in the playoffs; that said, nearly a decade of excellent regular seasons represents a substantial achievement in a league where individual seasons — successful and unsuccessful — can take a profound toll on coaches and players.

Tony Dungy’s body of work most closely resembles that of John Madden, who is a member of this select brotherhood in Canton. Madden made the Raiders annually relevant in the 1970s, making the team a constant playoff participant. Yet, he made the Super Bowl (and won it) only once. Dungy’s tenure with the Indianapolis Colts is similar to Madden’s run with the Silver and Black.

What makes Dungy’s HOF case a lot harder to refute is the coaching stop which preceded Indianapolis.

Dungy forged a successful tenure with the Tampa Bay Buccaneers in the late 1990s. Despite a limited offense, the Bucs — on the strength of their defense, which was always Dungy’s calling card as a coach — reached the 1999 NFC Championship Game and played a near-perfect defensive game against the high-flying St. Louis Rams. Only a remarkable catch by veteran receiver Ricky Proehl prevented the Bucs from winning that contest. Nevertheless, Dungy did excellent work with two organizations which hadn’t tasted a lot of glory before he arrived. He’s certainly at the lower end of the HOF spectrum, but he doesn’t own the thinnest portfolio of any coach in Canton.

Anyone who wants to raise an objection about Dungy’s inclusion should do so only from the standpoint of the coaches who have not yet been allowed inside the club’s doors. Tom Flores won two Super Bowls with the Oakland and then Los Angeles Raiders. Bill Cowher won a Super Bowl and carried forth the Pittsburgh Steelers’ remarkable organizational continuity over a long period of time. Dick Vermeil made Super Bowls with two different organizations, winning once. He reached the divisional round of the playoffs with a third team (the Kansas City Chiefs). Dan Reeves never won a Super Bowl as a head coach, but he made four Supes and remains the only man to coach the Atlanta Falcons to the big game.

Yes, a number of other men should have gotten the call before Dungy, but if you think John Madden’s credentials were worthy of the Hall, Dungy’s are at least as good if not better.

What a scene that will be.