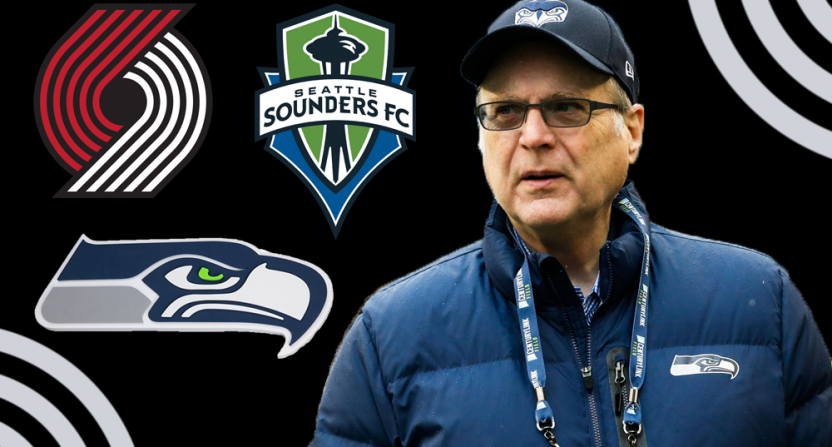 Billionaire Paul Allen passed away Monday at the age of 65. Allen had announced in early October that non-Hodgkin’s lymphoma has returned to his body after he’d initially beaten it in 2009. The Microsoft co-founder leaves behind a fortune of $20.3 billion and over $2 billion in philanthropic contributions.

The Seattle native will be remembered in many different ways by many different people, but when it comes to the sports fans of the Pacific Northwest, Allen will almost certainly be remembered very well. That’s especially true when you consider what might have happened to a trio of pro sports franchises had he never owned them.

Only five years after resigning from Microsoft, then-35-year-old Allen purchased the Portland Trailblazers in 1988, making him the youngest-ever owner of any major American sports franchise. The team elevated Rick Adelman to coach soon after and the Blazers, led by Clyde Drexler and Terry Porter, went to two NBA Finals in three seasons.

We miss you.
We thank you.
We love you. pic.twitter.com/rxkn1IjJ0R

Just as important as what happened on the court, Allen made sure the franchise would be able to play in a quality arena as well. He was one of the driving forces behind the creation and funding of the Rose Garden (now known as the Moda Center). Originally built in 1993, Allen chipped in a chunk of his own money to get it built. And when the owner of the arena went bankrupt, Allen purchased the arena outright in 2007. A different owner might have not bothered trying to save the arena and instead used it as leverage to get a better deal and/or move the team elsewhere.

Speaking of owners threatening to move elsewhere, then-Seahawks owner Ken Behring announced in 1996 he was moving his NFL franchise to Los Angeles. However, when Behring realized he was locked into the lease at the Kingdome through 2005, he instead decided to sell. Allen swooped in with an agreement to buy the team if a new stadium could be built and after funding was approved via election, he purchased the franchise.

Your leadership inspired us.

In the year since, Seahawks fans have come to be known as some of the loudest in the nation and the franchise is coming off a run as one of the best in the league. By 2005, the Seahawks made it to their first Super Bowl. In 2013, they won their first Super Bowl in franchise history. They returned to the Super Bowl once again in 2014 but fell short. Still, thanks to Allen’s stewardship, the team that almost became the Los Angeles Seahawks (yuck) instead became the pride of Western Washington.

As for the Seattle Sounders, it’s entirely possible they could have returned and thrived without Allen, but his involvement in the MLS team’s ownership helped them become a force in the league, featuring one of the top fanbases in the nation. It was that Seahawks stadium that really helped make things a reality. With it came the assumption that an MLS franchise would follow. Sure enough, when Allen joined the ownership group alongside Adrian Hanauer, Joe Roth, and Drew Carey, that made the whole thing seem as easy as a free kick. The club that would become Seattle Sounders FC was approved in 2007 and being able to play in CenturyLink Field helped make it arguably the best home-field advantage in the entire league.

Without Allen’s financial clout, it would have been much harder for Seattle to get an expansion franchise when it did. Perhaps they would have eventually, but playing in the same stadium as Allen’s Seahawks in downtown Seattle made a world of difference compared to the alternatives. Had the Sounders been forced to play in the suburbs or Bellevue, things might not have worked out quite as well.

Allen left his mark on Seattle and Portland is many ways that go well beyond sports. Imagining what could have been in both cities had he never owned the Blazers, Seahawks, or Sounders is something local fans don’t want to think about. But one thing they’ll never forget is his impact.