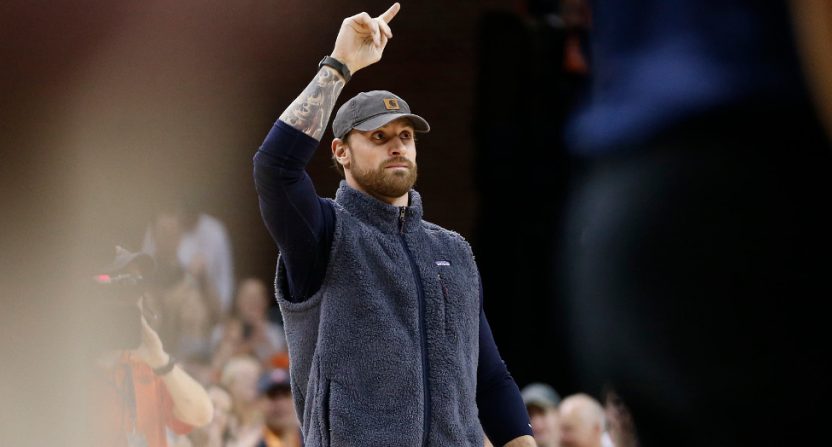 Eagles defensive end Chris Long is a smart guy. He’s well-spoken in interviews, informed about national issues and clever on social media. So it probably should have been clear right from the start that the tweet he sent Monday night was not meant to be taken at face value. That it was instead intended sarcastically, as a way to mock people who criticize athletes (mostly those who look like the average basketball player 🤔) for being weak, while proclaiming their preference for so-called “grinders.”

I see some ppl saying “turn on the Stanley Cup.” Guys take too many breaks in hockey. Shift changes constantly. For instance, last night,, Lebron played the entire game. I’d rather watch the grinders.

But because people on the internet are generally poor at detecting sarcasm, more than a few prominent figures thought Long was actually dissing hockey players for being fragile.

Oh, Chris. Stick to…..everything else in the world that you’re absolutely right about. And ask an Eagles trainer about what it takes to play hockey. https://t.co/ihGsz59btZ

What in the hell…. Guarantee most NFL players couldn’t skate a 2-minute shift. This is brutal. https://t.co/7Ptxn8FaN0

This is one of the worst takes I've ever seen from a pro athlete. https://t.co/sxPTx4gBHX

Bruh, I defended you against @BrittMcHenry, but this is some bottom feeder low level hot take bullshit right here. Football stops every 11 seconds. NBA can be a slow walk. Hockey dudes pull their own teeth and play on broken legs and put vodka in their gatorade bottles. https://t.co/Dyn8n1eg7X

When a guy who literally sits half of the game in the sport he plays decides to get mouthy about the NHL… https://t.co/hnNB14w9WH

You are wrong on this one. Top hockey players play 25 minutes a game over 82 games plus in a sport that combines speed, power, skill and contact. No greater grinders in the big four.

Love your feed but this is bad. And you would love hockey players pic.twitter.com/VO1g4yqwd6

And a whole bunch of regular fans…

Chris, did you ever skate a shift in a hockey game. Try it some time. You’ll get a whole new perspective.

Chris love ya dude but come on man…hockey is a tough sport exactly like football. It’s more than just gliding on the ice man.

Grinders??? Chris Paul sits for a sore hamstring in game 7. Hockey players playing with tears and broken bones in their bodies but you’d never know

But of all the gullible people who fell for Long’s tweet, none fell quite as hard as David Hookstead, a writer for conservative website The Daily Caller, who wrote an entire post (“NFL STAR HAS AN ABSURDLY STUPID TWEET ABOUT HOCKEY. HE COULDN’T BE MORE WRONG”) explaining just how off Long supposedly was. Here’s a wonderful excerpt, exactly as it appears on the page:

What is he talking about? He’d prefer watching grinders? Is he trying to just draw a reaction? There’s simply no way that anybody could possibly believe that NBA players are tougher or more interesting than NHL players. (SLIDESHOW: HOCKEY RINKS MIGHT BE COLD, BUT THESE WOMEN ARE SCORCHING HOT)

Hockey players skate around with knives attached to their feet. Knives on their feet! NBA players cry if they get breathed on too hard. Please don’t interpret this as me hating basketball. I love basketball, especially college. But facts are simply facts, and the reality is that NHL players are lightyears tougher than their NBA counterparts.

Long took note of The Daily Caller’s misread of his tweet, joking that he might have to take legal action against the website for sending angry hockey fans into his mentions.

OH MY GOD @DailyCaller fell for it. https://t.co/apzl82V1Wc

Anything recourse for me legally against the @DailyCaller . They slandered me pretty good there. Life’s different for me now.

I’ve received a number of mean messages. I’m worried @DailyCaller spreading #fakenews about me has factored into it. Am I safe?

In a way, all the confusion around Long’s tweet proved his original point: that people laud hockey players for their toughness, often at the exclusion of other equally tough athletes in other sports.

But hey, at least the St. Louis Blues knew what was up.