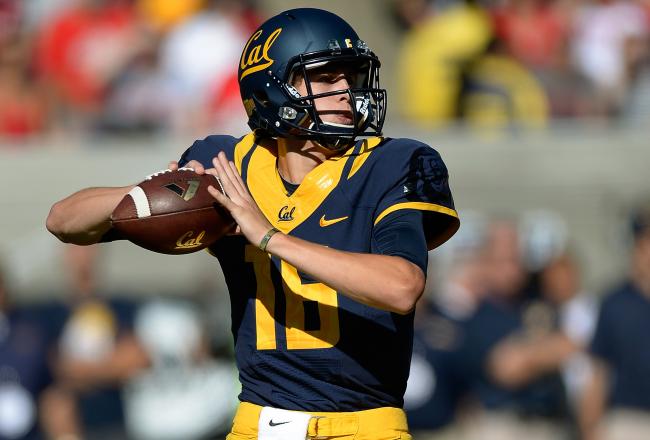 The 2016 NFL Draft is still a week away, but there have already been two blockbuster trades, with quarterbacks in mind, that have undoubtedly changed how the first round of picks—if not more—will play out.

It started two weeks ago, when the Tennessee Titans moved out of the No. 1 spot and down to 15, trading picks with the Los Angeles Rams in a deal that also included the Rams giving up two second-round picks and a third-round pick this year and their first- and third-round selections in 2017. Last week, the Cleveland Browns, not to be outdone, moved down as well, trading the second-overall pick in Round 1 and a 2017 fourth-round pick for the Philadelphia Eagles’ No. 8 Round 1 pick. The Browns also get a third- and a fourth-round pick in 2016 and the Eagles’ 2017 first-round and 2018 second-round picks as compensation.

The moves were made with the quarterback position in mind. The Rams and Eagles are each expected to take the presumed two best in the 2016 draft class—Cal’s Jared Goff and North Dakota State’s Carson Wentz—in a year considered to be weak at the position. But such is the nature of quarterbacks in the NFL. For better or for worse, the value of the position has never been higher, and a team not having one it feels truly confident in starting is tantamount to tanking an entire season. For the long term and even the short, the Rams clearly feel better about Wentz or Goff than Case Keenum, and the same can be said in Philadelphia, where the oft-injured Sam Bradford is currently being backed up by Chase Daniel.

The desire for a face-of-the-franchise quarterback is a big-time business every year, but even more so during this draft season. Not only are the Rams and Eagles in the market, but so are the New York Jets (pending the Ryan Fitzpatrick negotiations), the Denver Broncos (reigning Super Bowl champions without a signal-caller), the aforementioned Browns (in perpetuity, it seems) and the San Francisco 49ers (given Colin Kaepernick’s apparent unhappiness). Pair that many quarterback-needy teams with decidedly few truly top prospects and the result is the two massive trades that put the Rams and Eagles in position to take Goff and Wentz, leaving everyone else to fight over Paxton Lynch, Connor Cook, Christian Hackenberg and a variety of signal-calling leftovers.

This isn’t a new conceit, of course. Washington paid a pretty penny to grab the No. 2 pick in 2012, then held by the Rams, in order to draft Robert Griffin III. The Browns, via a series of Round 1 trade machinations, landed Johnny Manziel in 2014. Eli Manning and Philip Rivers were swapped in a trade in Round 1 of the 2004 draft. And the pressure to find stability at the quarterback position was so strong in 2011 that the Titans selected Jake Locker at No. 8, the Jacksonville Jaguars went with Blaine Gabbert at No. 10 and the Minnesota Vikings selected Christian Ponder at No. 12. None remain a starter presently, and Locker has since retired. Being quarterback-mad is certainly not new to the National Football League.

But the Nos. 1 and 2 picks both going for a massive sum, in order to take quarterbacks that no one is entirely convinced will live up to the draft billing? It’s unprecedented, but it’s also a very clear window into the nature of the business. To the Rams and Eagles, not having Goff or Wentz is apparently an unacceptable option this year. What the two teams gave up indicates the value they have placed on the two young passers. The quarterbacks, in this instance, mean more to these two teams than the players they could have drafted by staying at their original slot in the first round, as well the other picks they have given up in this and upcoming drafts. They aren’t betting the entire farm, as the New Orleans Saints did when they traded every pick in the 1999 draft to snag running back Ricky Williams, but they’ve certainly sold off a lot of their assets.

Will history prove that the Eagles and Rams made the right choices, or a massive mistake? That answer may not come for another year, if not longer. Clearly, both franchises believe that these trades to the top of 2016’s first round are calculated risks, necessary to improve their team’s fortunes over the next 10 to 15 years. But it could just as easily all go haywire in say, four years, which is all the time it took before Locker no longer had the desire to play football.

Fortune, allegedly, favors the bold, but were these moves instead simply perilous? Drafting at No. 1 or 2 does not guarantee the player selected will live up to that pedigree—especially when over 30 percent of Round 1 picks typically “bust,” and quarterbacks are not immune. And yet when, rightly or wrongly, quarterbacks weigh that much more than the other positions on the roster, more than multiple early-round draft picks spanning multiple years, and more heavily on the minds of coaches and fans alike, it’s no wonder the Eagles and the Rams were willing and enthusiastic to make these trades.