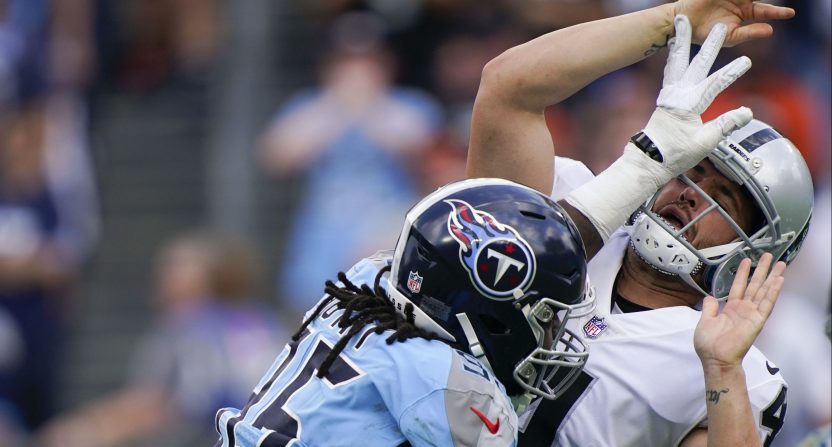 How bad have things gone for the Las Vegas Raiders in 2022? They’re 0-3 but if you’re looking for a positive spin, all three losses have been by six points or less. So, they’re not that far from being 1-2, 2-1 or even 3-0. That’s the good news. The bad news? This 0-3 start is different than one we’ve seen in a long time.

The Raiders aren’t simply 0-3. They are the only 0-3 team in the NFL. At a glance, that may not seem like such a big deal. In reality, though, that hasn’t happened since 1959.

Raiders are first team to be the ONLY 0-3 team in NFL since the 1959 Lions pic.twitter.com/oRotT8hzTU

If players-only meetings and closed-door discussions between owner Mark Davis and coach Josh McDaniels after only three games weren’t a sign that something is off in Las Vegas, this certainly is.

Not only is 1959 pre-merger but it predates the need for a merger. The American Football League wasn’t even founded until 1960. Or, put another way, the last time a team sat as the NFL’s lone 0-3 squad, the Raiders didn’t even exist. And for anyone wondering, the 1959 Detroit Lions finished the year 3-8-1.

Since 1981, only teams have made it to the playoffs after starting 0-3. The good news for the Raiders is that outside of the 1982 Tampa Bay Buccaneers (thanks to that year’s midseason strike, the playoffs were expanded to eight teams per conference), only six (or in one case, five) teams per conference made the playoffs in those seasons. Furthermore, those seasons were only 16 games, with the 1982 Buccaneers again being the exception. So, the Raiders have a bigger playoff field and an extra game to work with.

What’s tough for the Raiders is that not only are they winless heading into Week 4, but seven AFC teams are 2-1 or better. That included both the Kansas City Chiefs and Denver Broncos, who are in the AFC West with Las Vegas. Those are also the next two opponents for the Raiders. Vegas will host the Broncos in Week 4 and play in Kansas City in Week 5. So, the Raiders not only have more than 60 years of history to overcome but if they can’t find something quickly, things might be getting even worse.