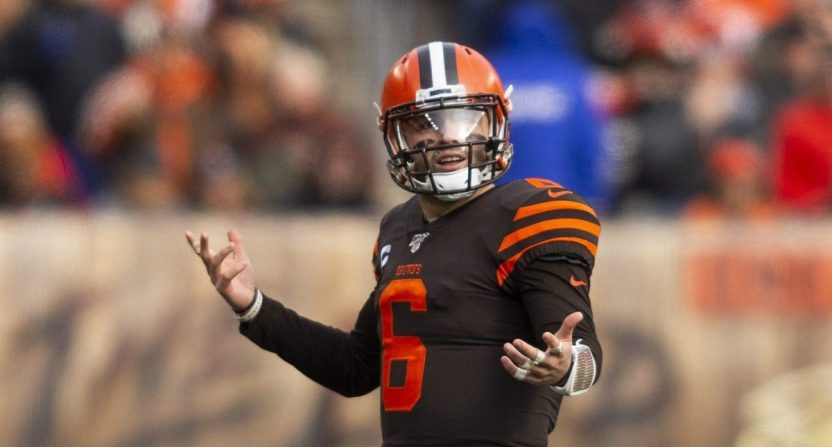 There’s been plenty of discussion this week of a potential postponement to the Las Vegas Raiders-Cleveland Browns NFL game Saturday, with the Browns’ lineup ravaged by COVID-19 protocols and that leading to a number of unusual signings and complaints from Browns’ QB Baker Mayfield (seen above in 2019) about perceived inequity between the league’s protocols for them and other teams. Well, on Friday, the day before the game (and the day the Raiders were set to travel to Cleveland), that game was bumped to Monday, as per Josina Anderson of CBS Sports HQ and USA Today: and Adam Schefter of ESPN:

The #Raiders at #Browns game is being postponed to Monday, per league source.

Raiders at Browns now will be played Monday night at 5 pm ET, per sources.

And as per Schefter, NFL Network’s Ian Rapoport, and The Athletic’s Lindsay Jones, that’s not the only Week 15 game that may possibly be moved, with the Washington Football Team-Philadelphia Eagles and Seattle Seahawks-Los Angeles Rams games also under movement consideration:

NFL and NFLPA discussing postponing multiple Week 15 games, per source. As one source said, “the league is getting pressure to move games.”

A lot of moving pieces right now with the NFL schedule, but potential changes include Raiders-Browns to Monday, and Seahawks-Rams to Tuesday, according to league sources.

This sounds like it’s tracking to be a Tuesday night game, per source. https://t.co/uuZyEQ6qIz

Update:  The WFT-Eagles and Seahawks-Rams games have in fact been moved to Tuesday:

Eagles and WFT moved to 7pm on Tuesday. Both teams informed of change

Seahawks vs. Rams will move to Tuesday at 4 p.m. PT, per sources. https://t.co/faNa3MnzlR

On the NFL games moving to Tuesday, Fox will split the country 70 (Washington-Philly) /30 (Seahawks-Rams) with the two games.

These moves come after around 100 players across the NFL tested positive for COVID-19 from Monday to Wednesday, and after the league reverted to tighter protocols from the pre-vaccine era. The numbers have shot up further since then. But the league’s protocol changes did also provide ways for asymptomatic players to “test out” of quarantine faster, so the numbers could also drop much more quickly than they have in the past under the previous longer times required for players to return. So we’ll see what happens with these games and others. Oh, and as per the “Why isn’t this a forfeit?!” discussion that both the Raiders and Eagles’ CB Darius Slay have brought up, ESPN’s Kevin Seifert relays that postponement is the first part of that protocol, and forfeit is only possible if a game can’t be rescheduled and if the outbreak started with an unvaccinated player:

So the way I read it, no game could be forfeited without first an attempt to reschedule, which has happened. If it has to be delayed again, and can't be rescheduled, then the NFL goes to the next step: Was the outbreak triggered by an unvaccinated player?

So there will be a lot to watch for in the coming days.