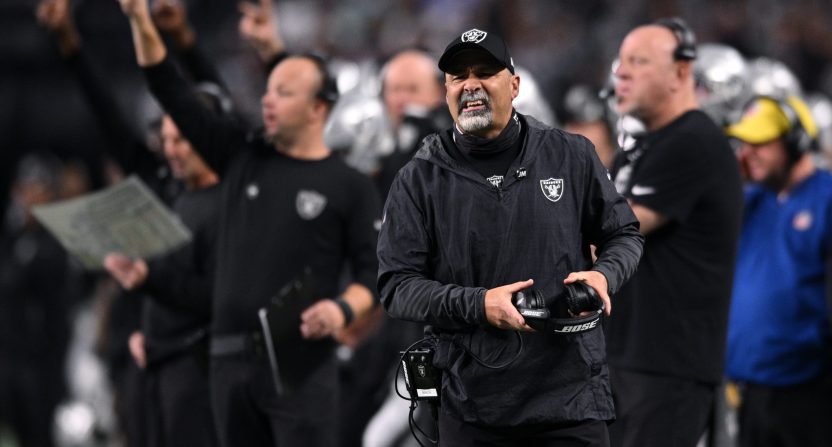 As soon as the Jacksonville Jaguars defeated the Indianapolis Colts on Sunday afternoon, NFL fans started paying close attention to the scheduling quirk that meant if the Los Angeles Chargers and Las Vegas Raiders tied, they would both make the playoffs over the Colts. When the Pittsburgh Steelers defeated the Baltimore Ravens, that eliminated the Colts and meant the Steelers were now waiting to see who would win the SNF game.

Turns out, despite everyone’s best efforts, the game actually almost ended in a tie.

Following a fourth-quarter comeback by the Chargers, the game went into overtime tied at 29-29. The Raiders kicked a field goal, which was matched by the Chargers. All of a sudden, the game was tied up once again with four minutes left in OT and NFL fans thought that somehow, the tie might actually happen.

Instead, Chargers head coach Brandon Staley called a very questionable timeout with 39 seconds left, giving the Raiders a chance to regroup. They then drove the ball into field goal territory and won the game with a 47-yarder to win the game.

According to him, however, the Raiders might have considered letting the game end in a tie until Josh Jacobs cracked off a run that helped put them in field goal range.

“Yeah it was a conversation, we were talking it,” said Bisaccia, when asked if he considered settling for a tie. “We ran the ball there and they called timeout. So I think they were probably thinking the same thing. Then we had the big run, so once we had the big run, we felt it was an advantageous field goal position for us. We were gonna take the field goal and try to win it. But we certainly talked about it on the sideline. We wanted to see if they called a timeout or not on the run. They didn’t, so we thought they were thinking the same thing. And we popped the run in there, giving us a chance to kick the field goal to win it. So we were certainly talking about it.”

The NFL probably isn’t too jazzed to hear that this tie scenario was something one of their teams actually considered. But hey, the Raiders essentially had a playoff spot locked up at that point, so it also kinda didn’t matter as far as they were concerned. They might as well have tried to go for the win but could have fallen back on playing for the tie rather than risking giving the ball back to the Chargers.

As you can imagine there were certainly some strong reactions to the admission, especially from those who felt that Staley’s decision to call timeout wasn’t actually to blame.

Until they ran for 10 yards on third down https://t.co/lhFfUOJHxf

That Jacobs broke the run on 3rd down is the only reason it didn't end in a tie. Not Staley's timeout, which had nothing to do with it, other than w/e impact it had on result of the 3rd down play. You're not turning down a 47 yarder or whatever it was. 57-59? Maybe you sit on it. https://t.co/zPkApMX6bV

So it wasn’t just a joke. The Raiders were seriously considering just letting the clock run out. That would’ve surely helped refuel that old rivalry with the Steelers. https://t.co/MNMlBjvXTh

There you have it. True or not, it's one of those things you'll have to always wonder about. https://t.co/ISZkxSASTf

Alas, America came so close to the thing it wanted desperately but it didn’t happen. It still got to watch Carson Wentz implode with the playoffs on the line, so at least there’s that.