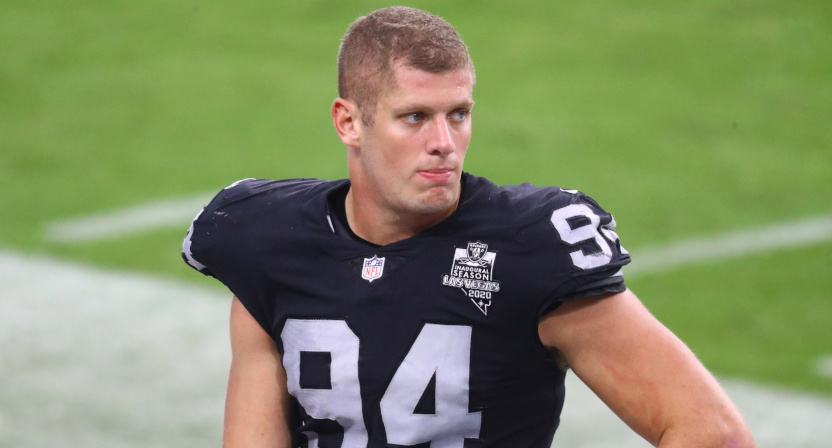 While 15 former NFL players have come out as gay or bisexual, no openly gay or bisexual player has ever played in a NFL regular-season game. Michael Sam came out in advance of the 2014 NFL draft and was the first openly gay player ever selected in the NFL draft (he was picked in the seventh round), but was cut by the (then-St. Louis) Rams during the preseason, and while he later signed with the Dallas Cowboys, he never got off their practice squad. (Sam did later play one game during the CFL regular season in a brief stint with the Montreal Alouettes, but never played in a NFL regular-season game.) So Las Vegas Raiders’ defensive lineman Carl Nassib’s decision to come out as gay is notable, and, if he survives preseason cuts this summer, it may lead to him being the first openly gay player to play in the NFL regular season. Here’s how Nassib announced this on Instagram:

Here’s a transcription of that video, via Jim Buzinski at Outsports:

“What’s up people. I’m at my house in West Chester Pennsylvania. I just wanted to take a quick moment to say that I’m gay. I’ve been meaning to do this for a while now but finally feel comfortable getting it off my chest. I really have the best life, the best family, friends and job a guy can ask for.

“I’m a pretty private person so I hope you guys know that I’m not doing this for attention. I just think that representation and visibility are so important. I actually hope that one day, videos like this and the whole coming out process are not necessary, but until then I will do my best and my part to cultivate a culture that’s accepting and compassionate and I’m going to start by donating $100,000 to the Trevor Project. They’re an incredible organization, they’re the number one suicide-prevention service for LGBTQ youth in America and they’re truly doing incredible things. I’m very excited to be a part of it and help in any way that I can and I’m really pumped to see what the future holds.”

The Raiders responded with an expression of support on Twitter:

Proud of you, Carl 🖤 pic.twitter.com/R9aJxYFefW

And here’s how ESPN initially covered this on air:

What history looked like just now on ESPN. pic.twitter.com/7UhP64n2TP

NFL commissioner Roger Goodell also weighed in with a statement:

“The NFL family is proud of Carl for courageously sharing his truth today. Representation matters. We share his hope that someday soon statements like his will no longer be newsworthy as we march toward full equality for the LGBTQ+ community. We wish Carl the best of luck this coming season.”

Nassib made the Penn State team in 2011 as a walk-on and went on to an impressive career there, including winning the Big Ten Nagurski-Woodson Defensive Player of the Year, the Hendricks Award for the nation’s top defensive end, and the Lombardi Award as the top lineman or linebacker. He was drafted in the third round (65th overall) by the Cleveland Browns in 2016, played there for two years, was waived at the end of the 2018 preseason, was claimed by the Tampa Bay Buccaneers, and posted six sacks and 12.5 tackles for loss for them that year, following that up with a six-sack campaign in 2019. He then signed a three-year, $25-million deal with the Raiders as a free agent in March 2020, and posted 2.5 sacks and an interception for them last year.