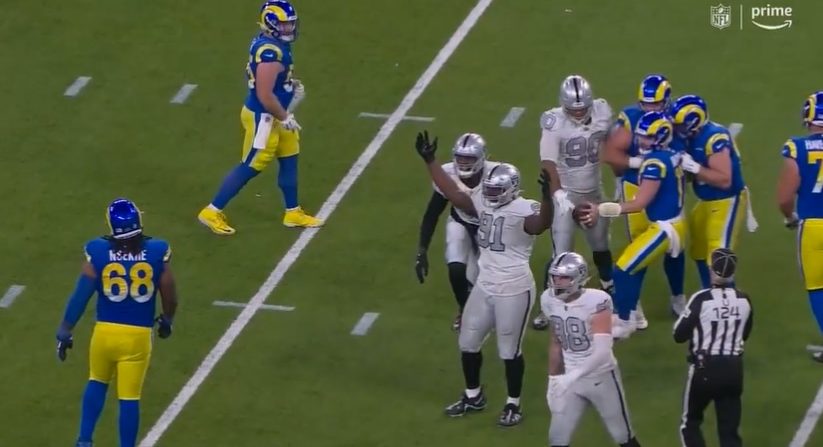 In the third quarter of Thursday’s game against the Los Angeles Raiders, Connor Shelton committed a mindless penalty. It cost his Los Angeles Rams a realistic chance at three points and for a while, seemed like it could cost them any hope of tying or winning the game. Fortunately for Shelton, he was one-upped later in the game by Las Vegas defensive lineman, Jerry Tillery.

An apparent game-sealing interception was nullified by a pass interference penalty by Raiders’ cornerback, Amik Robertson. One play later, though, Maxx Crosby and Chandler Jones sacked Baker Mayfield for a nine-yard loss. With a running clock, the Rams’ best option was to hustle back to the line and have Mayfield spike the ball to kill the clock. That would have given Los Angeles third-and-19 with somewhere around a minute to go from its own 13. Only — thanks to Tillery — that’s not what happened.

Well after the play was over, Tillery committed a dead ball, unsportsmanlike conduct penalty. What did he do? With the referee looking right at him, Tillery swatted the ball out of Mayfield’s hands.

And of course, there's almost no way that winning touchdown is scored without this dumb penalty on Jerry Tillery. pic.twitter.com/9ZMW7DEgMA

That gave the Rams 15 free yards and also stopped the clock, giving the Rams time to regain their composure. On the following play, Mayfield and Ben Skowronek connected on a 32-yard pass. Not long after that, Mayfield found Van Jefferson for the winning score.

How long until Jerry Tillery gets whacked by the Raiders?

Josh McDaniels when he sees Jerry Tillery in the locker room pic.twitter.com/xpGwYrxHQY

Jerry Tillery sabotaging the Raiders and killing their playoff hopes is something you could never make up.

Raiders teammates to Jerry Tillery in the locker room after the game 😂😂😂 pic.twitter.com/Q9pD8zeUAm

I'll be blown away if Jerry Tillery is a member of the Raiders when I wake up tomorrow.

McDaniels can call BS all he wants but Tillery was nothing but a complete buffoon and he cost the team a "W"! https://t.co/80a1b5zTCk

Jerry Tillery's penalty was the play of the game…wow. Terrible. #Raiders

Penalties are a part of football. They are frustrating, for sure, but they happen. Penalties like this, though, are at a different level of stupidity. This was not an effort penalty. It wasn’t even a situation where Tillery was engaged in a shoving match and got caught retaliating. There was absolutely no reason to commit this penalty.

Tillery, a former first-round pick, was cut earlier in the season by the Los Angeles Chargers. He was claimed by the Raiders and until this mistake, had played relatively well.

But this was a game that Las Vegas needed to win. The Raiders had won three games in a row before Thursday and had managed to even climb back into the playoff race in the AFC. Now, though, those chances look grim. The New York Jets presently hold the final Wild Card spot in the AFC. But even if the Jets lose on Sunday, the Raiders will be two games behind them with only four to play.

Tillery isn’t the only reason that Las Vegas tough shape. But without this gaffe, the playoff race would look a lot brighter for the Raiders.