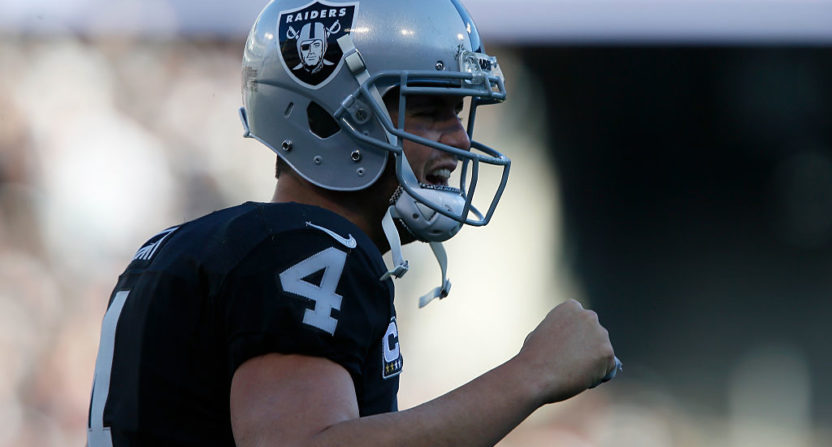 As of June 22, 2017, The NFL has a new highest-paid player in league history. His name is Derek Carr.

According to multiple reports surfacing on Twitter from multiple NFL reporters, the Oakland Raiders have inked their franchise quarterback coming off an MVP-caliber season to a new five-year contract valued at $125 million. According to Ian Rapoport of the NFL Network, that makes Carr the highest-paid player in NFL history, surpassing Indianapolis Colts quarterback Andrew Luck (Luck signed a $140 million deal last year, but that was over a six-year period).

Carr is coming off his best season in the NFL in his young career, although it ended prematurely due to a broken leg in the last two weeks of the season and took a promising run off track as a result. Carr played in 15 games for the Raiders last season and passed for 3,937 yards and 28 touchdowns with just six interceptions. Through his three years in the league, Carr has played in every game except for the last game he missed last season due to injury. Moving forward, the Raiders have plenty of experience to rely on to have a belief that Carr will be a steady force leading the Raiders offense in the years to come.

And it is important to keep a close eye on those years to come, as the Raiders are preparing to move out of Oakland and to Las Vegas once a new stadium is deemed ready to use in the next couple of years. How Carr’s contract is broken down could be influenced by the team’s pending move. Carr would be wise to work out a deal that backloads a good amount of the contract to after the Raiders move out of California due to the state tax differences between California and Nevada (assuming Carr moves to Nevada).

Because there is no state tax in Nevada and California's tax rate is 13.3 percent, Derek Carr could backload his new deal and save millions.

Adam Schefter of ESPN notes other key players on the Raiders roster could work to negotiate back-loaded deals in the future as well. That’s a bit of a risk for the player as the move to Las Vegas is still multiple seasons away from happening and the Raiders could cut a player before being able to take advantage of the state tax difference in Nevada. Then again, any player the Raiders would be working those kinds of deals are unlikely to be at risk of being removed from the roster if the Raiders can help it. And there is virtually no chance Carr will be released from the team.

As Carr has stated, he would like to be a Raider for life. As of today, that goal took a giant step toward happening, which Carr celebrated on Twitter.

Now it's done ?! From the jump I've wanted to be a Raider 4 life. One step closer to that! Blessed!!! Business done! Let's just play now!!!

The Raiders and Carr wanted to get a deal done before training camp, so this is one distraction that will be non-existent heading into the fall as the Raiders can continue to focus on taking the next step on the field to achieve their season goals that were left unfulfilled last season.

For now, Carr is the highest-paid player in the NFL, but those titles rarely remain in place for too long. As contracts continue to rise, the lifespan of such a title will continue to shorten. But Carr doesn’t care about that. He just wants to help the Raiders win a Super Bowl.