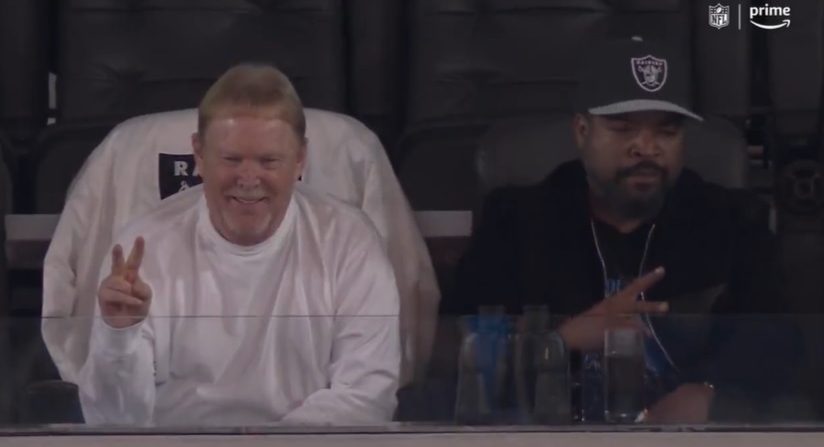 While the Las Vegas Raiders are technically the visiting team for Thursday night’s game against the Los Angeles Rams, you wouldn’t know it to see or listen to the crowd. The Raiders made Los Angeles their home from 1982-1994, won their most recent Super Bowl title there and still have a devoted following in the City of Angels. That includes Los Angeles native, rapper/actor, Ice Cube.

In fact, not only was Ice Cube at SoFi Stadium on Thursday night, but he was sitting next to a VIP — none other than Raiders owner, Mark Davis.

Could this be a good day for the Raiders their fans? pic.twitter.com/NAGcix95dU

This wasn’t a pairing that many people were expecting to see on Thursday night, but it brought a smile to many faces.

Mark Davis and Ice Cube 😂😂😂 – you love to see it #raiders

I would really like to hear the conversations Mark Davis has with Ice Cube.

Mark Davis and Ice Cube, what a duo.

Cube’s history with the Raiders is vast — and also mixed. In a 1991 song, he famously blasted Davis’ father, longtime Raiders owner Al Davis, saying “Stop givin juice to the Raiders, cuz Al Davis never paid us.” In 2010, though, Ice Cube directed and starred in a 30 for 30 documentary, Straight Outta L.A., which detailed the Raiders’ time in Los Angeles. It also featured a lengthy interview between Cube and the elder Davis, which was one of the final interviews Davis (Al) gave before his 2011 passing.