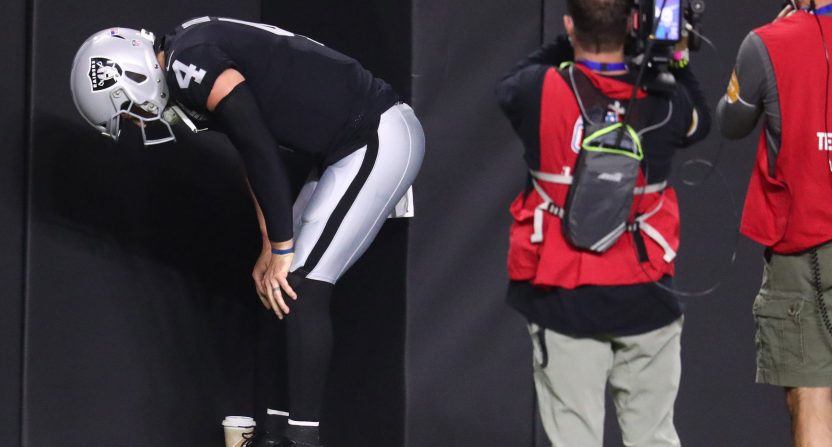 Las Vegas Raiders quarterback Derek Carr left Thursday night’s game vs the Los Angeles Chargers with a groin injury in the first quarter. On 3rd-and-goal at the two-yard line, Carr — who entered the game with a career-best 102.1 passer rating — rolled out to his right and came up lame.

Yikes. That doesn't look good for Derek Carr (and the Raiders). #TNF pic.twitter.com/9yceNDytaY

The Raiders confirmed that it’s a groin injury (as was clear to anybody watching the game), and ruled him “questionable” to return.

The questionable tag seems pretty optimistic, especially when the Raiders have a starting-caliber backup quarterback in Marcus Mariota. And Mariota didn’t take long to show why he was the No. 2 overall pick in the NFL Draft just five years ago, before starting 61 games over five seasons with the Tennessee Titans.

On his first drive with the Raiders, Mariota led Las Vegas on a seven-play, 88-yard drive, for their first touchdown of the game. The drive included a 22-yard pass from Mariota, a 13-yard pass, an 11-yard run, and a 35-yard dime to Darren Waller for a Raiders touchdown.

Ok Marcus, we see you with the DOT 🎯 @Raiders

*2nd-most improbable for the Raiders this season & lowest of Waller's career#LACvsLV | Powered by @awscloud pic.twitter.com/7uxMH5edBO

The Raiders (7-6) have no room for error in a packed AFC playoff race (Las Vegas is currently ninth, two spots and one game out of the seven-team field). Five Thirty Eight gave the Raiders a 15% playoff chance entering Thursday night.

It may be up to Mariota to save the Raiders, and it will take a comeback effort in the second half on Thursday night. Mariota is 5-of-5 for 80 yards, but the Chargers take a 17-10 lead into halftime.