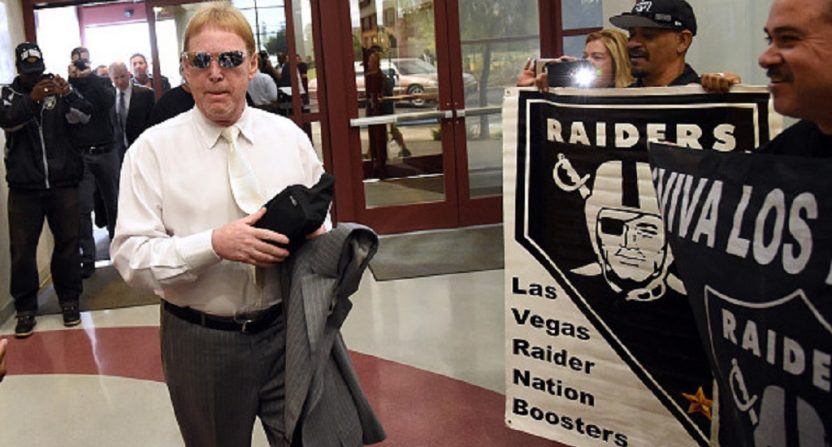 It seemed the Oakland Raiders’ hopes to move to Las Vegas may be dead after casino mogul Sheldon Adelson — and then investment firm Goldman Sachs — backed out of intentions to provide $650 million towards the plan in late January. However, it appears the stadium plan found new life via a different avenue.

According to the Los Angeles Daily News’ Vincent Bonsignore, the Raiders have secured financing for a potential Las Vegas stadium, courtesy of Bank of America. The bank would provide the rest of the remaining capital, as both the city and owner Mark Davis have provided $1.2 billion in pledges.

The project is estimated to come in around $1.9 billion total.

Adelson still looks like he may be a player in this whole ordeal, as he knows the area and the people in it. Reports state that he may try to lure another team in if he isn’t a part of this new deal.

As far as the Oakland contingent goes, it looks like Fortress Investment Group — who’s backing Ronnie Lott’s bid — wasn’t at a meeting on Monday regarding the team’s future:

Nothing new was added from Oakland officials, leaving them in a bit of a purgatory:

2. Was told by an #NFL source: "Bottom line, no new proposals or information on the foundational issues" (all of which have been laid out) https://t.co/1bbnKphsUL

This showdown of towns and money is going to end up in a seemingly messy divorce either way. Someone isn’t going to like the way this goes down. It just depends which side is going to get the brunt of the pain.