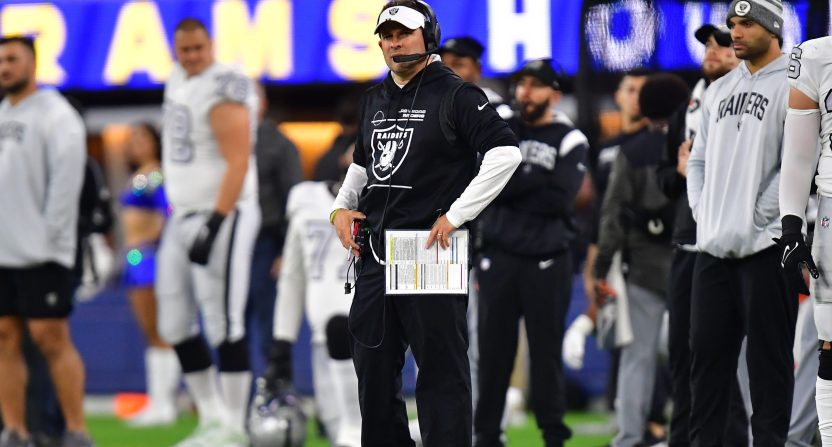 It looked like the Las Vegas Raiders had turned their season around prior to Thursday’s matchup against the Los Angeles Rams, winning each of their last three games. However, an epic collapse on Thursday by the Raiders may have spelled the end of their playoff hopes in 2022.

Despite going into the fourth quarter with a double-digit lead, they allowed Rams quarterback Baker Mayfield to pull off an unreal comeback in the fourth quarter due to some brutal mistakes which was capped off by an insane game-winning touchdown pass to Rams receiver Van Jefferson.

Baker Mayfield picked one heck of a time to throw his first TD pass with the Rams.
pic.twitter.com/Yds7Z8bZ6u

This epic collapse by the Raiders has unfortunately been the story of their season this year.

Their latest loss is the fourth time this year that they have lost a game that they were leading by double-digits at halftime, according to Josh Dubow of the Associated Press.

It certainly seems the Raiders have reached a new low with their latest collapse, and the NFL world took to social media to blast them for the loss.

The Raiders just saw their faint playoff hopes die because they let the Rams, with no timeouts, and a quarterback who showed up yesterday, drive 98 yards.

That's the Raiders for ya.

Now there's a stat for the ages . . . and I'm very impressed you refrained from saying `Derek Carr is 0-4 when leading by double digits at halftime . . https://t.co/Uivc99QnN5

It’s unclear exactly where the Raiders go from here. The type of collapses that they are having is an offense that could certainly get head coach Josh McDaniels fired.

It also may put quarterback Derek Carr on the hot seat in the future. Regardless, this is something that has absolutely ruined their season just one year after making the playoffs.