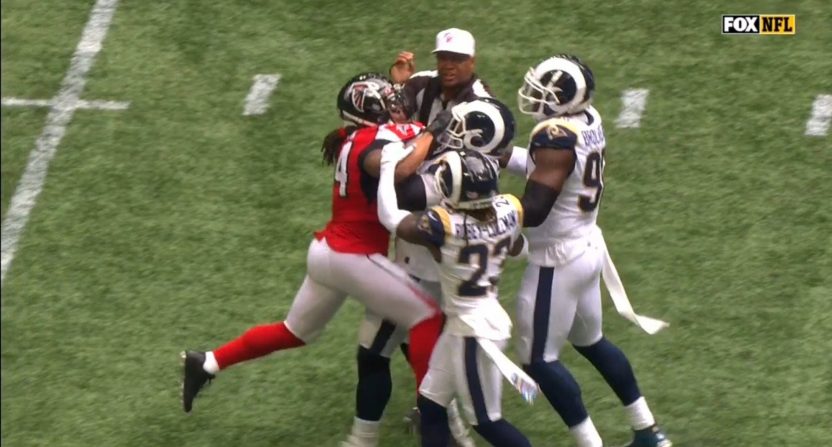 Los Angeles Rams defensive lineman Aaron Donald is developing a bit of a reputation. One way or another, if you’re an opposing player who gets in his way you’re going to end up leaving the game early.

Earlier in the season, the 6-foot-1, 280-pounder knocked Drew Brees out of a game after the Saints quarterback smashed his thumb into Donald’s arm. Sunday, Donald took two Atlanta Falcons players out of the game, although in this instance it was in two very distinct ways.

By the third quarter, the Rams were cruising to victory over the Falcons when a Matt Ryan pass was picked off, effectively killing their last bit of momentum on the day. After the play was done, both teams got pretty chippy. A melee ensued and Rams offensive lineman Andrew Whitworth was seen pulling on Falcons running back Devonta Freeman’s hair in an attempt to subdue him. It was a bush league move and certainly something that set Freeman off.

Wow.
How about @RamsNFL OT Andrew Whitworth casually pulling Freeman down by his hair? POS move for sure. pic.twitter.com/JCYl17vyUM

Unfortunately, Freeman ended up taking out his frustrations on Donald. Things got heated and Donald picked the 200-pound man up off the ground in order to assert dominance. In response, Freeman punched him in the helmet, which was dumb for many reasons, least of which is that he got ejected from the game.

OMG! Aaron Donald just lifted Devonta Freeman up like it was his last set of bicep curls!

Adding injury to insult, Donald found himself in the Falcons’ backfield in the third quarter with a chance to disrupt a Matt Ryan pass attempt. He not only did that but forced a strip-sack and got the ball. However, he also landed right on top of Ryan’s leg, injuring it and causing the QB to leave the game. Matt Schaub came in to relieve Ryan but that makes it two Pro Bowl quarterbacks that Donald has now knocked out this year (albeit in non-dirty fashions both times).

Things are getting worse for the Falcons. Aaron Donald sacked Matt Ryan… and Matt Ryan was limping after. Damn. pic.twitter.com/oyPKXnQIxU

The lesson for upcoming opponents of the Rams is clear. Do not let the reigning Defensive Player of the Year into your backfield and do not let him anywhere near your quarterback or running back. Easier said than done, we suppose.