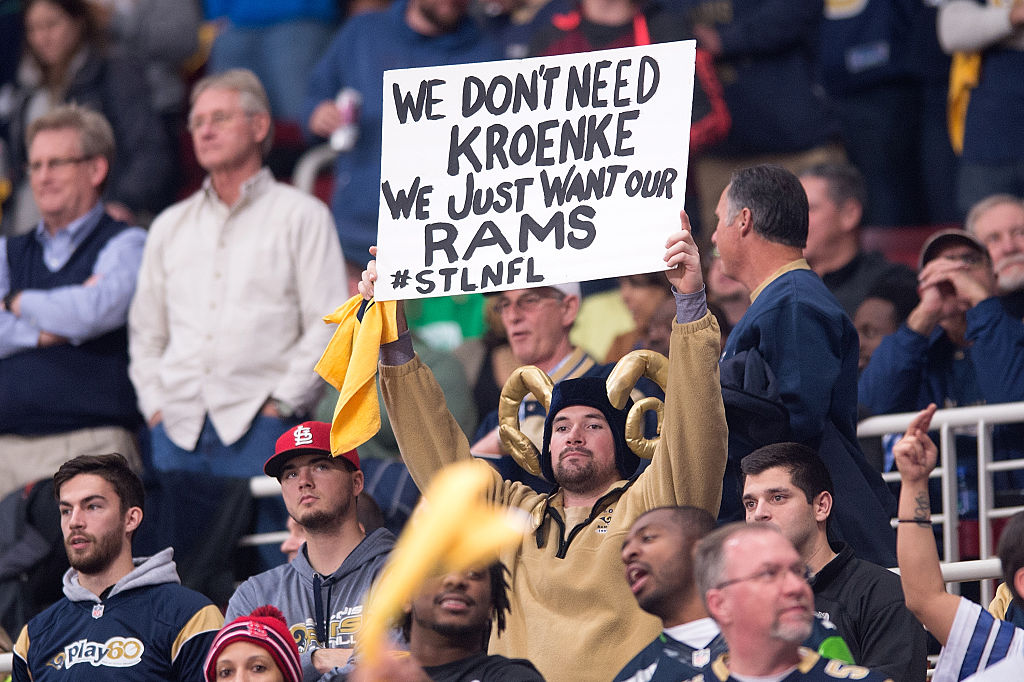 For the first time this century, an NFL team has relocated. Actually, maybe two of them. The league owners on Tuesday approved a compromise that will send the St. Louis Rams back to Los Angeles while giving the San Diego Chargers the option to join them at any point in the next year.

If the Chargers opt to stay put, the Oakland Raiders will gain the ability to team up with the Rams at a planned venue in Inglewood, California. Meanwhile, the league has agreed to contribute $100 million toward new stadium projects in either San Diego or Oakland, leaving only St. Louis in the dust.

A look at winners and losers from Tuesday’s historic resolution.

The city of Los Angeles: The Rams are back. And if you aren’t a Rams fan, the Chargers may be coming soon. And even if you don’t care to support either team, this is costing you $0.00 in tax money.

The city of Oakland: Even in the face of a potential move, the city has not been willing to fork over public funds for a new stadium. Now that Los Angeles is probably off the table, that bluff might pay off. And it helps that the Raiders will now have an extra $100 in league money to put toward a new venue.

The Raiders: With an extra $100 million in funding from the league, the Raiders might have a chance to finally make a run at building a new stadium in the Bay Area. However, Mark Davis didn’t immediately commit to Oakland long term, which leaves the door open to join the Rams in LA (if the Chargers opt to stay in San Diego), possibly even as an equal partner with that team, or move somewhere else entirely.

Rams owner Stan Kroenke, Raiders owner Mark Davis and Chargers owner Dean Spanos: Kroenke got everything he wanted, it always seemed the Davis family was a little more passionate than Spanos and Kroenke about staying put and Spanos has bought himself some time and leverage with right of first refusal or an extra $100 million in his pocket.

Commissioner Roger Goodell: Sure, they’ll vilify him in several new cities. But Goodell is already entrenched as a villain. The reality is this privately-financed Inglewood venue will be a boon for the league, and both the Rams and Chargers are likely be more lucrative in LA than they were in St. Louis and San Diego. His job is to make the owners money and keep the owners happy. On Tuesday, he accomplished both tasks.

The Kansas City Chiefs: Rams fans in St. Louis who aren’t completely turned off by the NFL and don’t want to support Kroenke’s team in LA will have several nearby options, including the Bears, Colts, Bengals and Titans. But the most geographically appropriate bandwagon to jump on is in Kansas City. It looks like it might already be happening.

The city of St. Louis: Duh. St. Louis sports fans have now lost two pro football teams in a 30-year span. Kroenke is the real-world edition of Carter Pewterschmidt — a businessman worth $7.5 billion with roots in Southern California who is paying $550 million to move the Rams from St. Louis despite the fact the local government was willing to help him (did I mention he’s worth $7.5 billion?) build a new venue to replace the 20-year-old Edward Jones Dome. It’s painfully obvious Kroenke never cared for football in St. Louis. LA was always the end game. The people in St. Louis got screwed.

San Diego politicians and/or taxpayers: This is what the NFL does. Despite an excess of $10 billion in revenue, the league attempts to bleed cities and taxpayers dry by issuing ultimatums regarding financing for venues. Local politicians don’t want to see teams leave, but it’s not easy to rationalize footing billion-dollar bills in order to help organizations that are often far more lucrative than the cities themselves. Nobody wants to subsidize billionaires, but that’s often the lesser of two evils. By setting a deadline for the Chargers to join the Rams at the proposed Inglewood facility, all the owners have done is apply further pressure on San Diego city council. If council caves, the city saves the team but loses hundreds of millions of dollars. If council sticks to its guns, it loses even more political capital.

The Buffalo Bills: It’s fully apparent now that Ralph Wilson Stadium will soon become the oldest venue in football that hasn’t gone through a major renovation. Nearby Toronto — the fourth-largest city in North America — could be an appealing relocation option for the Chargers or Raiders, which only puts more pressure on the Bills and the Western New York officials.

Developers in charge of logistics at the site of the proposed Inglewood Stadium: This means they’ll actually have to address the fact the Federal Aviation Administration has suggested the venue is “presumed to be a hazard to air navigation.” If indeed the new stadium interferes with aircraft radar, I’m sure the folks heading the $1.8 billion project will find a solution (and make some money doing so), but it’s a headache they’ll now officially have to encounter.

The San Francisco 49ers: The 49ers could still wind up winners if the Raiders eventually move and leave that entire region to Jed York’s team. But if anything, Tuesday’s deal decreased the Raiders’ chances of moving. And that extra $100 million in stadium funding for Davis probably won’t help the 49ers in any attempts to lure Oakland to their brand-new venue in Santa Clara.

The Oakland Athletics: The Major League Baseball team that currently shares the decrepit O.co Coliseum with the Raiders won’t likely be able to get the ball rolling on a new venue until the fate of their co-tenants is determined. That was delayed on Tuesday, which leaves the A’s in stadium purgatory.