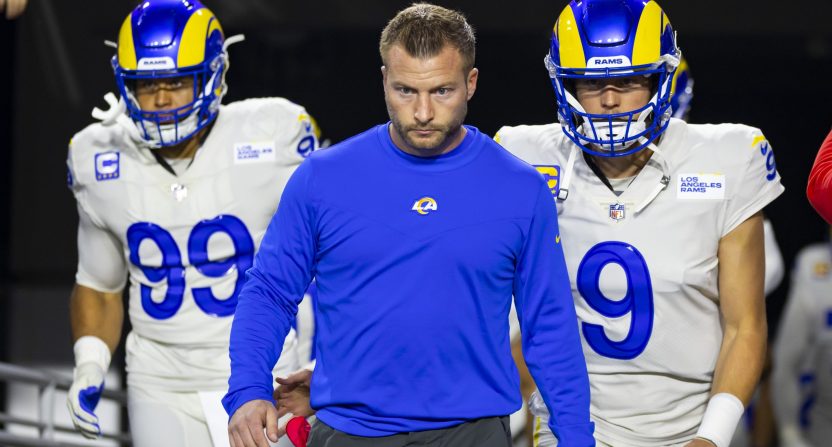 Just before the Los Angeles Rams kick off the NFL season Thursday night against the Buffalo Bills, they announced they have extended the contracts of head coach Sean McVay and general manager Les Snead.

McVay brought the Rams their first Super Bowl this last season and Snead was the architect of bringing in several key players to the team, including quarterback Matthew Stafford and wide receiver Odell Beckham Jr.

The Rams have announced extensions for head coaches Sean McVay and GM Les Snead that will run through 2026. Both contracts place them among the highest-paid in their respective roles, a source said.

“As an organization, we constantly strive to better ourselves every day. This requires selflessness, dedication and great leadership throughout,” Rams owner Stan Kroenke said in a release. “Sean and Les personify this mindset. They have been crucial to many of our successes that transcend wins and losses. They epitomize the ‘We not me’ mantra that permeates the entire organization. Their extensions are well deserved.”

McVay (seen above ahead of a Dec. 13 game last year), who was the youngest coach to win a Super Bowl, also made a statement about his extension.

“As I have always said, the players, coaches and staff of the Rams, with tremendous support of ownership, are dedicated to achieving something bigger than themselves.”

And Snead had one as well:

“We have been engineering a special team, organization and culture at the Rams, and we have been doing it with special people. I look forward to continuing our mission and I’m especially appreciative of Stan for giving us the opportunity to do so.”

The Rams hope to continue their momentum as they defend their championship starting Thursday night.