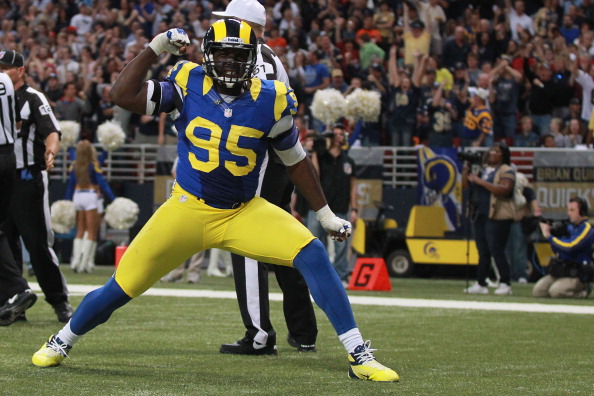 Dinosaurs existed. That is a fact. It cannot be argued.

Well OK, theoretically anything can be argued, which brings us to Rams defensive end William Hayes.

In an ESPN.com profile of Hayes, the 30-year old Winston-Salem State alum professes to not believe dinosaurs ever walked the Earth.

“No, I don’t believe dinosaurs existed,” Hayes said last month. “Not even a little bit. With these bones, it’s crazy because man has never seen a dinosaur, we can agree on that, right? But we know exactly how to put these bones together? I believe there is more of a chance you will find a mermaid than you will a dinosaur because we find different species in the water all the time.

“I don’t understand how [Long] just believes in dinosaurs. That’s just crazy to me. We know they died. We know what a T-Rex eats? That don’t sound crazy to you? We have never seen a dinosaur before but we know exactly where every single rib [was] and which rib goes where. That’s crazy to me.”

The ESPN article leaves open the possibility that Hayes is kidding, but the defensive end appears pretty firm in his belief that archaeologists have been lying to us for centuries.

Whether or not it started out as a joke and grew into a conviction is irrelevant at this point. Ask Hayes about the existence of dinosaurs and mermaids and you’ll get the type of mythological hot takes you’re only likely to find on the furthest reaches of social media and the Internet.

Frankly, arguing against the existence of dinosaurs would be pretty extreme even for the furthest reaches of social media. This is right up there with the time Terrence Howard argued 1 x 1 = 2.

Hayes’ teammate and friend Chris Long speaks for the rest of us when he decrees the dinosaur-doubting is ridiculous.

“He thinks archaeologists place bones underground like a parent would place Easter eggs,” Long said earlier this season, laughing. “They just planted them. It’s some large conspiracy. He does not believe that dinosaurs ever existed and he thinks that mermaids are real. I love dinosaurs, so we have a big point of contention.”

Hayes is a key member of the Rams’ excellent defensive line, with 5.5 sacks and 48 tackles on the season. He’s also apparently quite a personality. And really, even though he is definitively wrong about the whole dinosaur thing, he’s not hurting anyone with his ludicrous opinion, so what the hell.

As the ESPN piece concludes, “It would be a shame if characters like Hayes were to go extinct.”