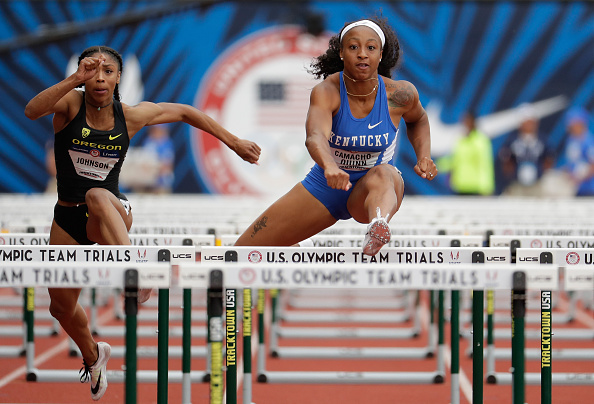 Los Angeles Rams star defensive end Robert Quinn wasn’t at the team’s training camp practice on Tuesday, and it wasn’t because of an injury, suspension, or any reason you’re used to hearing about a player missing practice.

Quinn was absent because he traveled to Rio to watch his sister, Jasmine Camacho-Quinn, compete in the Olympic Games. Now that’s quite an awesome excuse.

Camacho-Quinn is a 19-year-old competing in the 100-meter hurdles for Puerto Rico in the Olympics, and she took first in her preliminary heat on Tuesday to automatically qualify for Wednesday night’s semifinals. Just last month, she won the NCAA title for 100-meter hurdles as a redshirt freshman at the University of Kentucky.

Rams head coach Jeff Fisher said that Quinn approached the team over the summer about the idea of going to see his sister in the Olympics, and Fisher fully supported it (excerpt via The Los Angeles Times):

“It’s a once-in-a-lifetime opportunity,” Fisher said, adding, “It’s a really neat thing for Rob and his family. It’s the right to do to let him go down there.”

Quinn is still expected to be good to go for the Rams’ preseason game on Saturday against the Kansas City Chiefs, and that would be a big step forward for the 26-year-old pass rusher as he’s coming off back surgery (and missed the preseason opener). But, for now, the two-time Pro Bowl selection will just be a great brother and have his focus on cheering on his sister in the Olympics.