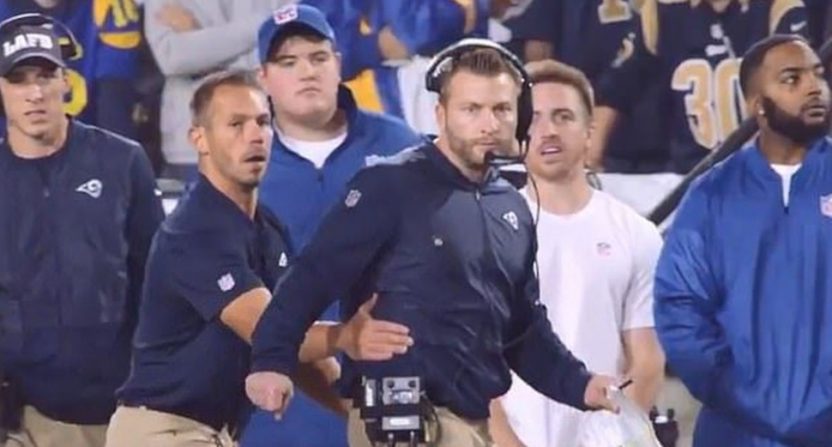 Friday has really not been a good news day for the NFL. It started with details of the eight-game suspension for Cleveland Browns’ RB Kareem Hunt (cut by the Kansas City Chiefs last November after video emerged of his February hotel altercation with a 19-year-old woman, it included news of police investigating an alleged battery incident with Chiefs’ WR Tyreek Hill and his three-year-old son, and then there was the news of Los Angeles Rams’ director of strength training and performance Ted Rath (more famous as head coach Sean McVay’s personal “get back” coach) pleading not guilty to three misdemeanor sexual battery charges. Jon Baird of Los Angeles news radio station KNX1070 first reported the news:

The “get back” coach of the LA #Rams, Ted Rath, has just entered a not guilty plea to 3 counts of sexual battery. The Rams say Rath is on a leave of absence. @KNX1070 pic.twitter.com/iWwjS3I0hx

Rath was arrested and released on bail Jan. 15, five days before the Rams beat New Orleans in the NFC championship game, according to Ventura County Sheriff’s Department spokesman Eric Hatlee.

Rath didn’t travel with the team to New Orleans or to the Super Bowl. The Rams said the coach was recovering from an injury at the time.

In a team statement issued Friday, the Rams said they “are aware of the charges filed against Ted Rath. We take these allegations very seriously. Once the charges were filed, we decided Ted would take a leave of absence from the team as this matter works its way through the justice system.”

Rath’s attorney, Vicki Podberesky, pleaded not guilty on his behalf Friday morning. She says they will go to trial if necessary to prove Rath is not guilty.

As per TMZ, these charges come from an incident that took place last June:

Rath — who’s also the team’s strength and conditioning coach — has been hit with 3 misdemeanor sexual battery charges stemming from an alleged incident on June 15, 2018.

Officials tell TMZ Sports the incident took place at a private residence in Moorpark, CA … with the alleged victim claiming Rath groped her multiple times without her consent.

The Rams’ bio for Rath has him listed as married with three children. And the team and the league have done a fair bit to promote him, including with this NFL Films piece on his “get back coach” Sunday job:

As the game plays on, Sean McVay and his "Get Back Coach" tango on the sideline.
Expect more of this at #SBLIII 😂@RamsNFL #NFLFilmsPresents: Get Back Coach airs this Tuesday at 6pm ET on @FS1! pic.twitter.com/5FMyWH4gzT

Rath’s next court date comes next month. We’ll see what happens there.