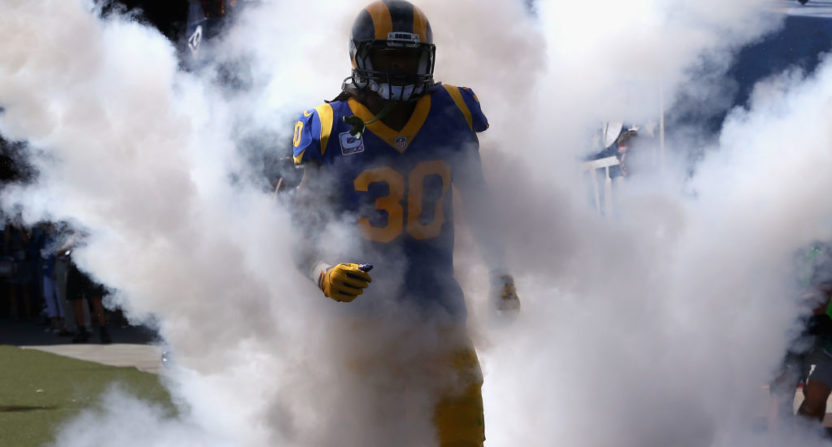 Sunday, the Los Angeles Rams will take on the rival Arizona Cardinals in an NFC West showdown. However, they won’t be playing in Glendale and they won’t be playing in a sparsely-attended LA Coliseum. This West Coast showdown will be taking place very far away from the West Coast in London’s Twickenham Stadium. Opening kick is scheduled for 9 a.m. PST, which isn’t an unusual NFL game time for West Coasters, except that it’s often the time to watch East Coast and Midwestern teams before their squads suit up.

The logistics that go into prepping and sending two NFL teams across the ocean to London or across the border to Mexico City are sure to throw off the schedules and rhythms of highly attuned athletes used to having full control over both. How they come away from the situation feeling, given that they have to get right back on a plane and get back to work the next day, varies.

The Rams are in a unique situation in that they end up traveling a bit more than most NFL squads thanks to the conditions of their move from St. Louis to Los Angeles two years ago. As part of the deal, they are about to play their second “home” game in another country in two seasons. They’re also on the docket to potentially play in Mexico City next year as well as make the trip all the way to China in 2019 if their brand new Inglewood Stadium isn’t ready.

It’s also their third trip to London overall and they’re hoping to turn it into their first win. At least this time they’re playing a fellow West Coast team instead of the New England Patriots or New York Giants, who got to stay home beforehand both times. Because of their location, the Rams have to spend the week in Jacksonville, Florida. While the setup is makeshift and temporary, many Rams players told the LA Times that they were enjoying the new locale.

Quarterback Jared Goff said “It’s been nice. It’s been kind of like a mini training camp.” Linebacker Alec Ogletree said he was enjoying it because “I don’t have to go to London and spend all week being cold.” Receiver Sammy Watkins added, “It’s been great. Great weather, got to stay on the beach.”

One Rams player who disagrees is running back Todd Gurley, who seems to see through the warm weather and accommodations in order to notice the way these changes and long trips affect him and other players in the long run.

“Terrible,” Gurley said after Thursday’s practice from the University of North Florida, when asked if he has been able to get into a routine with an unconventional schedule. “They need to stop this, all this stuff. This London, this Mexico City stuff, it needs to stop.”

“It’s cool playing over there, don’t get me wrong,” Gurley said of London. “Just more of the long week, messes up a bunch of people’s schedules. I’m pretty sure y’all [the media] wanna be in y’all bed right now, too. But naw, it’s all good. It’ll be love. The fans over there are great.”

The Times notes, however, that even Gurley was able to find comfort in the Florida layover, making time to visit fried chicken chain Zaxby’s during the week.

Gurley is tapping into the age-old concerns about the league putting profits ahead of player health and well-being. And it does seem unfair to force Rams players to take on more responsibility for the league’s international push just because they have a greedy owner. Then again, they’re almost all greedy owners, and so long as these trips to London and Mexico City and China(???) make sense on the bottom line, especially if international teams are in their future, Todd Gurley’s concerns will go by the wayside.

Now if Gurley were to threaten to leave the team because of the travel issue, then perhaps something might change. But probably not.

6 thoughts on “Todd Gurley on NFL international games: “they need to stop this””