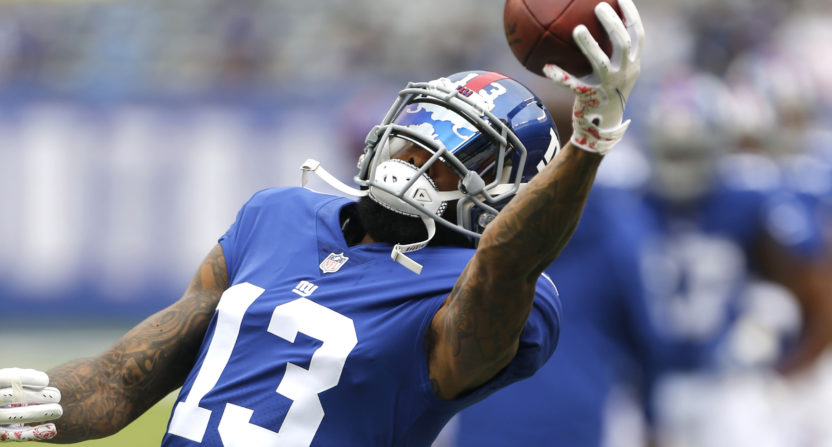 The New York Daily News reports that the Los Angeles Rams have talked with the New York Giants about trading for the Giants’ superstar wide receiver Odell Beckham Jr.

The L.A. Rams, according to multiple NFL sources, already have talked with the Giants about possibly trading for the dynamic wide receiver and turning him from a Big Apple phenom into a Hollywood star.

One Rams executive, when approached by the Daily News at the Ritz-Carlton Grande Lakes Monday afternoon, declined comment but flashed a wry smile and didn’t deny it. “Where did you hear that?” the exec said.

The NYDN adds that the Giants’ asking price for Beckham “is starting at a first-round pick plus.” So, with that wording, it should only take one first-round pick to acquire Beckham. Now, a trade would likely be dependent on Beckham signing an extension with that team, but the reported asking price really isn’t bad for one of the most talented players in football that is still just 25 years old.

The news follows a report from NFL.com’s Ian Rapoport on Monday that the Giants are willing to trade Beckham at the right price (which, should probably be higher than the reported asking price).

From @gmfb: The #Giants are open to discussing a possible Odell Beckham Jr trade for the right price… while he won’t be on the field without a new deal. pic.twitter.com/0HDvFQzXsk

As Rapoport also reported, Beckham — who’s in the final year of his rookie contract — “will not set foot on a field without a new contract.”

And that report comes after Giants owner John Mara said over the weekend that he “can’t answer one way or another” regarding Beckham playing for the Giants in 2018.

Mara was bluntly asked if he could forsee a scenario where Beckham didn’t play for the 2018 Giants. And before he answered, he took a very long pause.

“I can’t answer that one way or another,” Mara said. “We’re certainly not shopping him if that’s what you’re asking. But again, when you’re coming off a season where you’re 3-13 and played as poorly as we played, I wouldn’t say that anybody is untouchable.”

Understand, as The News has been writing, while trading Beckham isn’t Mara’s or the Giants’ preferred course of action given Beckham’s talent level, their patience has worn thin.

So while it’s hard to believe the Giants would be willing to give up a still-young superstar talent like Beckham (even with the recent off-the-field incidents), it does appear that there is a real possibility he could be traded.

And Beckham joining the Rams is certainly something the rest of the NFC doesn’t want to see. Behind impressive first-year head coach Sean McVay and the improved play of second-year quarterback Jared Goff, the Rams were a huge surprise and went 11-5 in 2017. They’ve followed that up with a terrific offseason that has included landing players such as cornerbacks Marcus Peters and Aqib Talib. In a creative offense that also includes one of the game’s top running backs in Todd Gurley, adding Beckham could make the unit downright lethal.

Beckham was limited to only four games in 2017 due to fracturing his ankle, but averaged 96 receptions and double-digit touchdowns over his first three seasons.