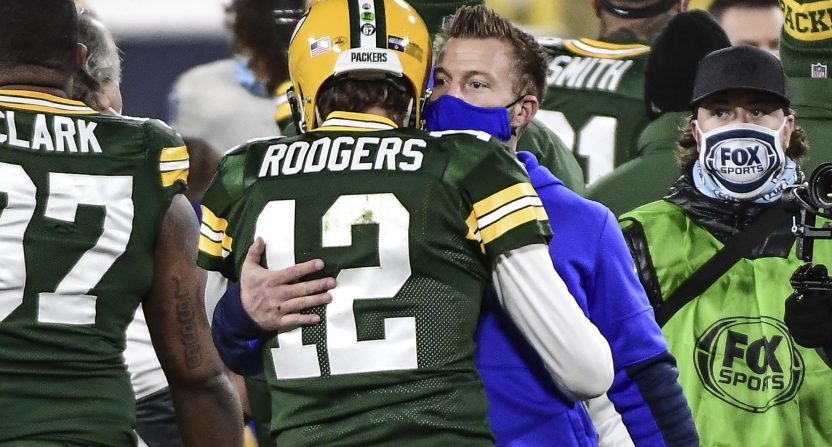 The Los Angeles Rams and Detroit Lions completed a blockbuster trade on Saturday that sent quarterback Matthew Stafford to the Rams in exchange for quarterback Jared Goff, two first-round picks, and a third-round pick. And before zeroing in on Stafford, the Rams reportedly showed interest in another quarterback from the NFC North. A quarterback who’s quite likely to be named this season’s NFL MVP (no, we’re not talking about Mitch Trubisky, Nickelodeon).

Sam Farmer of the Los Angeles Times appeared on NFL Network on Sunday night, and said that the Rams “made a run” at trying to acquire Green Bay Packers superstar quarterback Aaron Rodgers. However, Farmer said that the Packers were “adamant that they weren’t trading him.”

The Rams "made a run" at Aaron Rodgers, but the Packers were "adamant" they weren't trading him, per @LATimesfarmer pic.twitter.com/SnAn8nphYI

It certainly doesn’t hurt the Rams to try, especially when it comes to one of the best players ever at the most important position in sports. And especially after Rodgers sounded very uncertain about his future with the Packers after last Sunday’s NFC Championship Game loss to the Tampa Bay Buccaneers (a loss that came after Rodgers beat the Rams in the Divisional Round). Add Rodgers to the Rams in 2021, and they’re the heavy NFC favorite.

But the Packers should have zero interest in trading a superstar quarterback who still looks like his prime self at the age of 37. Unless Rodgers suddenly decides to retire (which would be a shocker with how great he’s still playing, and after he said last May that he still has a strong desire to play into his 40s), it’s hard to imagine a scenario that doesn’t have him as the Green Bay starting quarterback in 2021.

Additionally, Rodgers spoke with more optimism about his future with the Packers when appearing on Tuesday’s edition of The Pat McAfee Show:

"I don't feel like I said anything that I hadn't said before.. It was just more of a realization I think that ultimately my future is not necessarily in my control…

“After the season that I had, and potentially winning MVP, and we obviously made another good run, I don’t think that there’s any reason why I wouldn’t be back. But there’s not many absolutes, as you guys know, in this business. To make an absolute statement about something that is not an absolute, I didn’t do it. I guess that’s why it went kinda nuts.”

And Packers CEO and President Mark Murphy said on Tuesday that “there’s no way in heck Aaron is not going to be on the Packers” in 2021. “We’re not idiots,” Murphy added.

Packers' Mark Murphy on WNFL radio in Green Bay: “I’ll say this: There’s no way in heck that Aaron is not going to be on the Packers. I mean, he is going to be the MVP of the league, might have had his best year ever. He’s our unquestioned leader and, you know, we’re not idiots.”

So, this should all go a long way to squashing the speculation that Rodgers could play for another team in 2021.