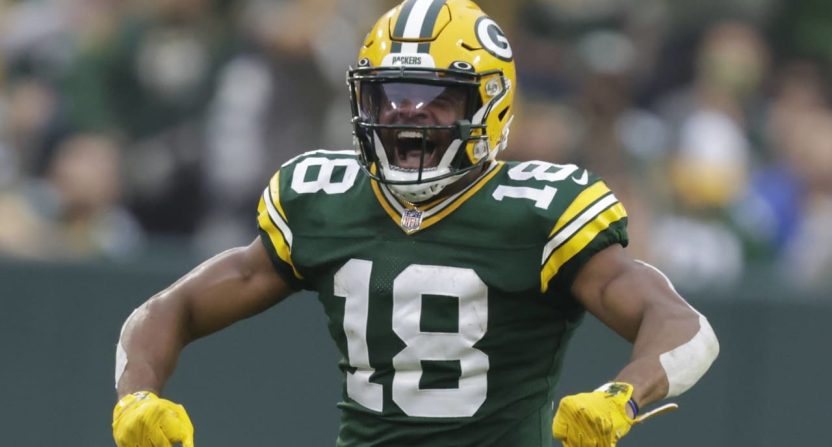 The Green Bay Packers are set to take on the San Francisco 49ers at Lambeau Field this weekend in the Divisional Round of the NFC playoffs, and quarterback Aaron Rodgers could be getting one of his most reliable targets back in time for the game.

Ian Rapoport has reported that Green Bay Packers wide receiver Randall Cobb is expected to play for the first time since week 12.

Roughly 7 weeks after he had surgery to repair a core muscle issue, #Packers WR Randall Cobb is expected to play this week, per coach Matt LaFleur. Another injury boost.

Cobb underwent surgery following their victory over the Rams in week 12 to repair a core muscle injury that has kept him out the majority of the season, and it appears that he will be set to return off of the injured reserved list for this week’s game.

Randall Cobb has been one of Rodgers’ most trusted receivers over the years, playing for eight seasons for the Packers from 2011 to 2018 after making his return back to Lambeau this season after two years away from the team.

Here are some reactions around the NFL world about the news of the veteran receiver returning for the Packers.

Curious what the route/snap distribution is here.

Allen Lazard has just an 8.8% target share in games with MVS and Cobb, but he played well down the stretch. Wonder if he's earned a larger piece of the pie even with more mouths to feed. https://t.co/ek36KnTon9

6-8 weeks is a normal RTP for sports hernia surgery. Could be a little rusty in his first game back but risk of reinjury is very low

Should be a reliable boost for the offense https://t.co/nNAJHPrAE0

It will be interesting to see how much of a role Cobb will have in this offense going forward. The Packers have been extremely successful without him this year, so it wouldn’t be shocking for the Packers to only use him in a situational-type role.

Regardless, Cobb’s return will bring a reliable option back to Green Bay at the exact right time for a potential Super Bowl run. Cobb is one of the very few players remaining from the Green Bay Packers Super Bowl-winning team in 2011, bringing a sense of familiarity to Aaron Rodgers that he will surely be glad to have back.